'Tomorrowland' festival in Barcelona canceled after fire breaks out on stage

A fire broke out on stage at a major open-air festival in Barcelona. More than 20,000 people were evacuated as some spoke of an explosion. 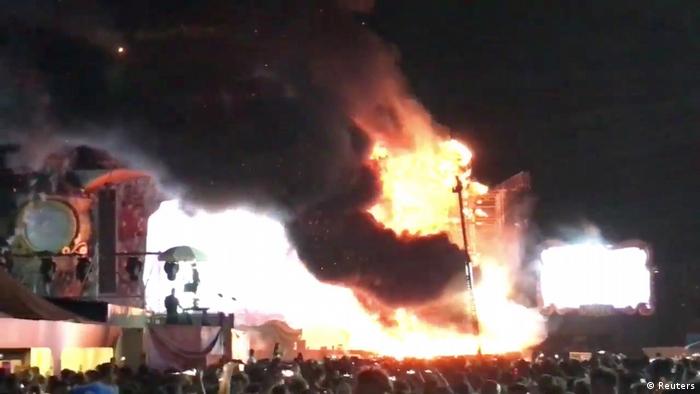 The "Tomorrowland" music festival had to be cancelled due to the massive fire engulfing the stage and threatening to put the lives of festivalgoers at risk. Images quickly surfaced on social media, with some reports likening to event to an explosion.

The evacuation of those attending the event at the Parc de Can Zam on Santa Coloma de Gramenet was reportedly conducted in an orderly manner and without panic breaking out among revelers. There were no injuries.

According to Spanish media the cause of the fire was not yet known. But the local fire brigade said it suspected a malfunction in the pyrotechnic equipment had started the blaze. The fire was extinguished around 11pm local time, taking just over half an hour to be brought under control.

The "Tomorrowland" festival has been taking place for 12 years, and is considered to be one of the most popular music festivals in the world. It was being held in Barcelona for the first time this year. Previously celebrated in Belgium, the event highlights electronic dance music, and always attracts large crowds of people.