Tom Cruise finally filmed a bitterly disputed scene from his new World War II film "Valkyrie," at the site of a memorial to the anti-Nazi resistance on German Defense Ministry grounds. 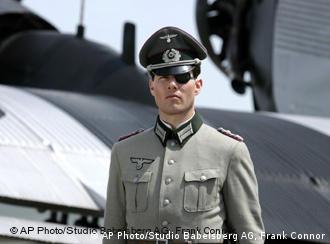 Cruise, along with his wife Katie Holmes and other "Valkyrie" cast and crew, held a moment of silence before filming the scene of the execution of a German army resistance leader who attempted to assassinate Adolf Hitler in 1944. 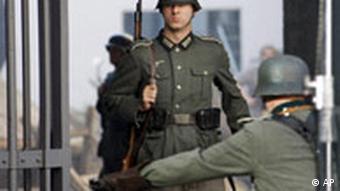 Actor in a Wehrmacht uniform, in front of Bendler Block

Early Sunday morning, Cruise held a minute of silence for German anti-Nazi heroes, as the team prepared to film at the Bendler Block -- the site where Wehrmacht Colonel Claus Schenk von Stauffenberg and his co-plotters were executed, a fellow cast member told German media Sunday

Preserving the dignity of Bendler Block

German authorities had initially refused permission for filming in the historic building in Berlin, citing concerns over "the dignity of the place." The Bendler Block is part of the German Defense Ministry and now holds a memorial to the anti-Nazi resistance.

They later agreed on condition that the production company show respect to Stauffenberg, played in the film by Cruise, as well as the other plotters.

"Shortly before we started filming, screenplay writer Christopher McQuarrie, director Bryan Singer and Tom Cruise made short remarks and then asked for a minute of silence, out of respect for the place and out of respect for the life achievement of these people who were executed there," German actor Christian Berkel, who plays fellow plotter Albrecht Mertz von Quirnheim, was quoted as saying in the Bild am Sonntag newspaper. 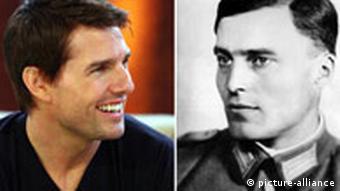 Cruise has been criticized for portraying Stauffenberg (right)

Stauffenberg and three other members of the plot to kill Hitler were executed there immediately after the attempt failed.

The filming of "Valkyrie" in Berlin has been beset by controversy from the start, much of it revolving around German objections to Cruise, a scientologist, playing a Catholic German hero.

Stauffenberg and three other plotters were shot at the site when the July 20, 1944 bid to blow up Hitler in his Wolf's Lair headquarters failed.

In a complete turnaround to an initial ban on US actor Tom Cruise to film at a Berlin memorial to the men who tried to kill Adolf Hitler, German government officials have now reportedly changed their minds. (14.09.2007)

Germany's Stauffenberg family has broken ranks over a controversial true-life movie in which Tom Cruise is to depict their ancestor who tried to kill Nazi dictator Adolf Hitler, with a family member playing in the film. (21.07.2007)