Tokyo inhabitants defy radiation to enjoy the cherry blossoms | Asia | An in-depth look at news from across the continent | DW | 08.04.2011

The cherry trees are in blossom in Japan. Many of the capital's inhabitants are making the most of the balmy weather to go for walks in the parks and don't seem too worried about radiation from Fukushima. 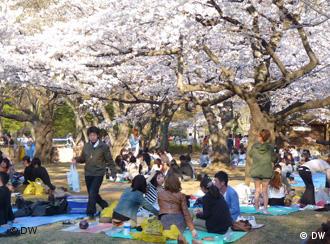 Eating picnics under a tree is traditional during sakura season

Tak Kohyama studied German at Kyoto University. Contrary to many of his compatriots, he is used to spending time with foreigners and has many friends abroad. For him, the sakura time, when the cherry trees come into bloom is very important but it also carries an element of sadness.

"I'm 45," he explains to me. "Of course we only see the cherry blossoms once a year and they are beautiful but every year we feel one year older." 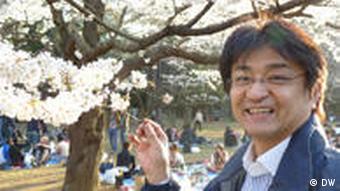 Apart from helping me to understand Japanese culture during my stay here and helping me with my research, Tak has also taken pleasure in correcting my broken Japanese.

Picnicking under a cherry tree

We are sitting under a cherry tree although the local authorities have warned against doing this this year. "Our mayor said we should not have any parties this year because many people had died and he did not think it would be good if people in Tokyo were loud and sang and danced," Tak explains.

But it would seem that many locals have not taken heed of Mayor Ishihara’s advice. Families and workers are sitting on blue blankets under the cherry trees, eating their picnics and drinking beer, sake and wine.

Tak's phone rings again – he says it has barely stopped over the past few weeks. People from abroad want to know how he is doing and his German friends in particular have been warning him about the radiation. "I think they’re allergic to radiation in Germany. They’re so sensitive," he says.

Foreigners arriving in Tokyo since the earthquake have been apprehensive about the radiation, including me. But mostly they have been shocked about how normal everything is in the Japanese capital. Apart from the fact that some streets and squares are less well-lit at night than they used to be, life goes on as usual. People go to work, to the restaurant or to the cinema. 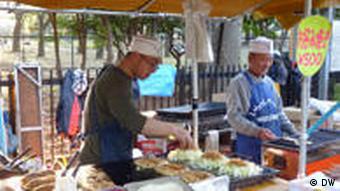 "Our life is totally normal I would say," says Tak. "I saw on TV that some radiation was coming from Fukushima but not much. I don’t think we can die from it."

There has been a tendency outside of Japan to think that locals are not being told the truth about radiation levels. But they have access to news agencies, websites, different sources of information, and when they compare it many draw the same conclusion – that the levels are not that high and there is very little danger for the people of Tokyo.

'We have feelings but it makes no sense to panic'

Moreover, there is a different approach to natural disasters. All Japanese are aware from a very young age that a catastrophe can strike at any time – an earthquake, a typhoon, a volcano eruption or a tsunami. But they also know that they will overcome such a catastrophe if they remain level-headed.

"We have feelings," insists Tak. "Of course, everybody is worried, everyone is shocked but to have feelings is different from panicking. It makes no sense to panic. It doesn't help at all." 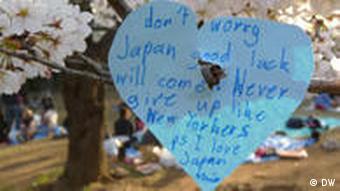 A declaration of love to Japan

He seems confident, like many of his compatriots, that the government and the operator of the Fukushima nuclear plant TEPCO will soon get the reactors under control.

However, he is worried about the price of reconstructing the region that was devastated by the earthquake and tsunami as this will cost "more than our annual budget."

"Before the earthquake our government always said: 'We have no money, how can we pay for everything?’ And then this happened. I don’t know how but I think we'll manage somehow."

"Manage somehow" is what most Japanese are trying to do, refusing to let themselves get down, enjoying life as much as possible, especially during the sakura season.

NHK, Japan's public broadcaster, has an earthquake early warning system that is unique in the world. However, some observers say the station could be more critical of the government's handling of the recent disasters. (07.04.2011)

Tokyo has banned the sale of dairy products from Ibaraki prefecture because of high radiation levels. But Minoru Nomura, a milk farmer in the small town of Omitama, says he will go bankrupt if he can't sell his produce. (06.04.2011)

Most Japanese have not heard of passive houses but energy-saving has becoming an increasingly hot topic since the natural disasters struck in March. The architect Miwa Mori is hoping for a breakthrough. (05.04.2011)