Togo is seeking outside assistance to stop it losing territory to the sea. Houses and roads are disappearing. Physical defenses can help, but they, too, are open to attack from the elements. 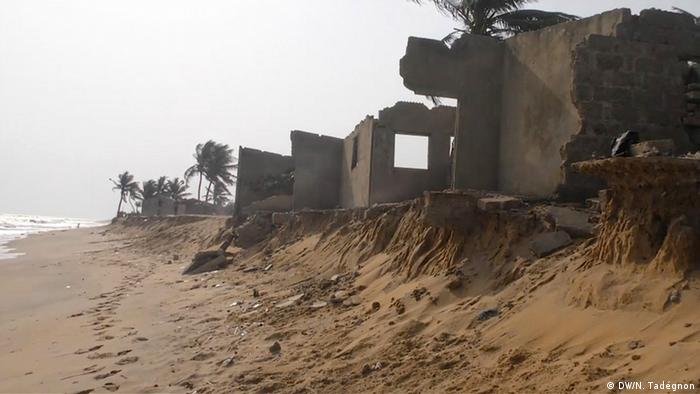 Man-made coastal erosion has reached alarming proportions in Togo. It is threatening the future of two major cities, Lome and Aneho, the current and former capitals, as well as dozens of fishing villages.

Coastal erosion, in which land or beaches are worn away by the wind and the waves, is destroying around five to ten meters (16-32 feet) of shoreline every year. In some locations, up to 25 meters has disappeared over the same period.

The sea doesn't only eat away at the shoreline, it also consumes any infrastructure, such as roads or buildings, or vegetation which may have been growing on it. Nothing remains.

Both the Togolese Environmental Department and the World Bank have launched projects to limit the damage being caused by coastal erosion. They involve, firstly, the building of physical structures that inhibit the destructive power of the wind and the waves, and secondly, encouragement for coastal communities to play an active part in defending their shoreline and to develop alternative sources.of income to replace those that contribute to coastal erosion.

Coastal erosion exists in nature, it is not necessarily man-made. But in Togo the damage can be traced backed to human intervention and the building of the autonomous deep sea port of Lome in 1968. The port can accommodate heavily-laden seagoing cargo vessels that require a water depth of more than nine meters.

Tchannibi Bakatimbe, project manager at the Togolese Environmental Department, told DW that the port's construction had disrupted the process of sedimentary accumulation. This is a natural process in which the beaches continually acquire deposits of sand, making up for the amount lost by erosion. The building of the port changed the direction of the currents and created a huge drift of sand just off the coast. "The drift prevents sand from being deposited on the beach," Bakatimbe said.

Lome port is an important source of revenue for Togo and is the only port in West Africa from which vessels can reach several of the region's capitals in just one day.

Pledge of future cooperation over environment

The port is constantly being expanded. Most recently, at the end of 2014, the port authorities opened a new Lome Container Terminal (LCT), which provides two additional harbor cranes. New handling equipment was added in 2015 to increase the terminal's efficiency. The LCT has become a gateway to landlocked countries, including Mali, Niger, Burkina Faso and northern Nigeria.

Bakatimbe claims the port is taking steps to minimize the environmental impact of any future construction work and this includes cooperating with environmental authorities. However, the port has yet to acknowledge any responsibility for the coastal erosion caused by its construction, or propose any remedies. 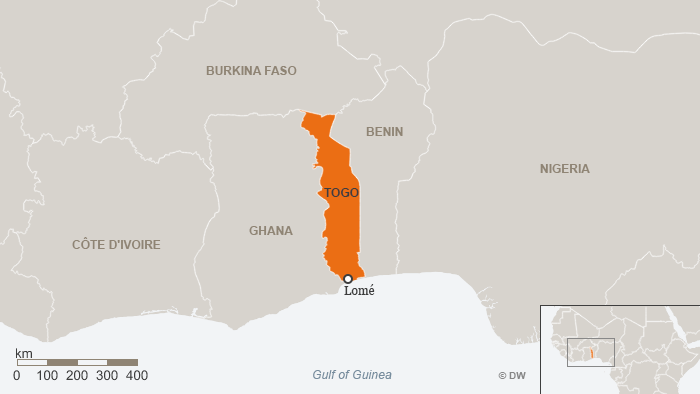 Togo has 50 kilometers (31 miles) of coastline, of which 40 kilometers has been severely eroded. The government has already built some physical defences. Between 2010 and 2014, it  erected groynes and riprap to protect the coastline at Aneho and surrounding areas. Groynes are low walls or barriers built out at sea. Riprap is the name given to large boulders or manufactured concrete objects used to fortify shorelines.

Bakatimbe says the construction of these structures along just 30 meters of coast has helped to stabilize more than four kilometers of shoreline by increasing sand accumulation. It has even led to the re-creation of a 50 meter beach which will eventually help support vulnerable populations.

Gado Bemah, the founder of The Association for African Science and Technologies for a Sustainable Development (ONG STADD), an environmental nonprofit organization in Lome, has predicted that  Aneho will be submerged in 5 years and Lome in 50 years if no additional  protection measures are taken.

The physical stuctures designed to halt erosion are themselves being destroyed by it. Sand under groynes and riprap in Aneho has been eroded away, causing some of the blocks to be swept out to sea.

Local residents also contribute to coastal erosion by collecting sand and gravel, which is used to build houses, as a source of income.

The government, in cooperation with the Global Environmental Fund, an international investment firm, is to launch a project which will help them find alternative ways of making a living. The project also intends to raise public awareness of the seriousness of the threat posed by coastal erosion. The Global Environmental Fund is also investing in stabilizing a further 13 kilometers of coastline.

The Gulf of Guinea has a history of man-made coastal erosion which began with the building of the Akossombo Dam on the Volta River in Ghana in 1961. Its construction kept back sediment that should have been deposited along the coast. This is a legacy which began "even before the construction of the [Lome] port,” Bakatimbe said. Cooperation among coastal states is crucial as the activities of one country can have an impact on the entire shoreline.

The World Bank has tentatively initiated a project involving six West African countries, including Togo, aimed at promoting "integrated coastal management," reducing the vulnerability of coastal areas and improving the livelihoods of coastal communities. The project could be approved in 2018.

Separately, the African Development Bank Group (AfDB) approved a $41 million (39 million euros) loan to the governments of Togo and Benin in December 2016 to finance the construction of 28 groynes and replenish sand deposits on exposed beaches. The main goal is to reduce coastal erosion from 20 meters per year to one meter per year.

Can permaculture save Togo’s precious coastline from the ravages of sand mining?

African countries are raising alarm because of their disappearing coastlines. Beaches erode mainly because of illegal sand mining. A Swiss foundation wants to help Togo restore its coastline. (06.04.2017)

Preview: Saving Lagos from the waves

The contstant thrash of waves against an unprotected shore can eat at its substance and create mass displacement. In Lagos a controversial construction is hoping to protect the city - or a select part of it. (21.04.2016)

Togo and Benin work to save the Mono River delta