Alcatel-Lucent's new lightRadio aims to replace bulky infrastructure with a handheld box. The company says the cube will use half of the energy of existing towers and base stations and will be "disruptive." 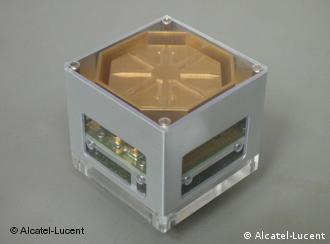 Alcatel-Lucent hopes that this lightRadio cube will replace mobile towers

If a French telecom company has its way, your mobile phone service might soon get a lot better.

At a company event on Monday, Alcatel-Lucent revealed a new device intended to replace all base stations and mobile phone towers. It's a handheld, energy-efficient device called the lightRadio.

"If you look at the coming five years, the demand for mobile data will grow 30-fold," he added. "We will not be able, as an industry, to supply the demand that people want to have. With this growth of data, a new approach is needed."

The new device is a six-centimeter cube, roughly the size of a Rubik's Cube, and supports all worldwide current bands and mobile standards, including GSM and CDMA. Sold added that five operators - including France Telecom's Orange, Verizon Wireless in the United States and China Mobile - would be among the first to test the lightRadio later this year.

The company claims that the lightRadio will reduce energy costs and the carbon footprint of mobile networks by over 50 percent.

"That's the equivalent of taking eight million cars off the road," Sold said. 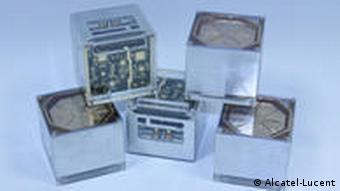 Given that the device was only just presented this week, few in the industry have been able to independently verify Alcatel's claims, but many are intrigued.

"If it actually can perform to the specifications given by the company, it would be a game changer for the wireless infrastructure industry," said Earl Lum, head of telecom gear industry research firm EJL Wireless, in an interview with Reuters.

Initially, the devices are meant to replace existing towers - Haran Sold, the Alcatel-Lucent executive, said that 12 to 18 cubes could be used to replace an average tower. They can also be used as a local repeater, or signal booster. That means individual consumers may eventually be able to install them in their homes or offices as a way to boost cell signal.

Sold declined to speculate on how much a single cube would cost mobile companies or general consumers.

However, he said that the lightRadio's small size would make it possible to use it in areas where there is poor service, or high demand, like an airport, train station, or convention center.

The device could potentially allow consumers to sell Internet capacity back to mobile providers. The lightRadio only requires an electricity outlet and a connection to the Internet.

"The mobile operators are looking for agility and elasticity," Sold said. "It can fundamentally change the basic dynamics of how this industry works."

In a new survey, 55 percent of respondents said they don't want mobile phones in use on planes. The IT industry trade group study also revealed that younger Germans tended to be more accepting of mobile tech in the sky. (01.02.2011)

SIM card registrations will require providing data to mobile comapnies for potential police use. But experts say the country's lack of data protection could lead to trouble. (27.01.2011)