Scientists say the effects of climate change on European seas pose increased risk of human illness, property damage and economic hardship, and that it is time to start adapting. 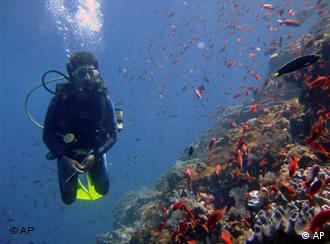 Climate change has a profound effect on marine systems

Researchers from countries across the European Union have compiled a synthesis of data distilled from the findings of hundreds of EU reports into climate change and its impact on marine systems. They also conducted a survey of 10,000 people in ten different European countries to establish exactly how much information from previous studies has entered the public consciousness.

What the scientists discovered is that while there is widespread concern over rising sea levels and coastal erosion, there is far less understanding of issues such as ocean acidification, and equally little sense of how best to adapt to the problems inherent in the waters which lap at Europe's shores.

John Pinnegar, Programme Director of Marine Climate Change at the UK-based Center for Environment, Fisheries and Aquaculture Science, told Deutsche Welle that people have got the message about reducing energy consumption, but have not begun to think outside the box in terms of trying to keep pace with change already afoot. 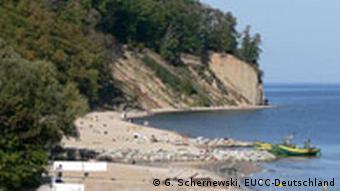 Land erosion is a problem faced by many European countries

"Even if we could cut CO2 emissions immediately, we might not see the turnaround for 100 years, so we have to think of how to adapt to what is happening now."

Putting coastal flood defenses in place and encouraging individuals to take out flood insurance are among the practical measures which could be taken.

Pinnegar says people have clearly jumped on the climate change mitigation bandwagon but that the thought of adapting to the here and now, confuses them. Failure to do so, however, could signify property lost to floods or land erosion and to an increased incidence of illness.

The synthesis says "millions of euros in health costs may result from human consumption of contaminated seafood, ingestion of water-borne pathogens and to a lesser degree, through direct occupational or recreational exposure to marine diseases."

There are concerns that warm-water vibrio, for which rising ocean temperatures are the perfect breeding ground, could ultimately put those who swim in European waters at risk of contracting cholera. 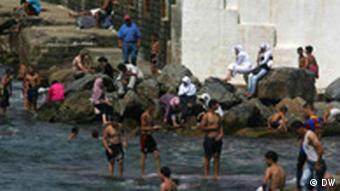 "Under EU law, we are legally bound to collect information on certain types of pathogens," Pinnegar explained. "But at the moment the vibrio species are not included."

He says it is therefore important for governments to ensure their waters are checked for pathogens which even if not there now, could appear in the coming years.

"As scientists it is up to us to point out the possibilities that exist," he told Deutsche Welle.

"We should be monitoring the levels of bacteria more than we do."

Besides highlighting the issues that present the greatest potential risks to the public, the survey also offered an insight into the best ways of presenting important scientific information to the public.

In Germany, for example, 51 percent of those questioned said they did not trust information given to them by industrial scientists. In neighboring France, however, only 21 percent expressed the same sense of distrust.

Pinnegar says knowing who and what are deemed reliable sources of information in different countries is very important. If, as is the case, university scientists are thought to more believable than their counterparts working for government agencies or industry, then it makes sense to use them to get out crucial messages.

The water is never far below land in the Netherlands

Trust was an important theme in the survey which accompanies the synthesis.

Researchers were surprised to learn that citizens in the low-lying Netherlands were significantly less concerned about the risks of inundation than those in any of the other countries included in the poll.

As far as Carlo Heip is concerned, though, there is a simple reason for this.

"People trusted the government to deal with the problem," he said of the administration in power at the time of the survey. "They anticipated what was going to happen and had an idea and a budget to deal with rising sea levels."

But not every government, or indeed the EU overall is successful when it comes to instilling that same sense of faith in its public. Most people seem to think it is up to their respective governments to do more to tackle what is a fast-evolving problem, and that to a large extent there is little they can do to help. According to Heip, they are not entirely wrong.

"We cannot do much about the oceans, we have to deal with the root of the problem, with the greenhouse gas emissions," he said, adding that it will take a much more concerted effort from countries such as the US, China and India to even begin tackling it in earnest.

One year has passed since the devastating floods in Pakistan killed nearly 2,000 and affected more than 20 million people. Despite reconstruction efforts, the situation remains grim in many areas. (27.07.2011)