Limping back to normal: one year after the floods in Pakistan | Asia| An in-depth look at news from across the continent | DW | 27.07.2011

One year has passed since the devastating floods in Pakistan killed nearly 2,000 and affected more than 20 million people. Despite reconstruction efforts, the situation remains grim in many areas. 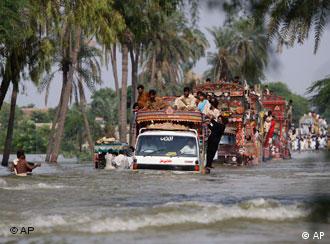 "This has been a heart wrenching day for me...I will never forget the destruction and suffering I have witnessed today. In the past I have witnessed many natural disasters around the world, but nothing like this." This was how the United Nations Secretary General Ban Ki-moon expressed his shock after he took a tour of areas affected by the flood in Pakistan in August last year.

The flood was the worst for 80 years. Khyber Pakhtunkhwa province in Pakistan's northwest, Punjab, Baluchistan and Sindh provinces were among the most badly hit. Two monsoon spells in late July and August last year led to the deaths of nearly 2,000 people, and affected another 20 million destroying 1.7 million homes in the process. 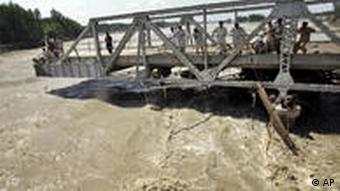 People stand on the remains of a broken bridge in Nowshera

Ahmed Kamal, spokesperson for Pakistan's National Disaster Management Authority (NDMA) assesses the damage one year later. While speaking to Deutsche Welle, he said, " According to our assessment, the damage caused by the floods was nearly 10 billion dollars. But now, nearly 99% of the displaced people have returned to their regions. The government also offered compensation of nearly 371 million dollars which has been distributed among 97% of those affected, that is 1.6 million households."

However, Hans Steinmann, head of Germany's development organization, the GIZ in Pakistan, says it is difficult to generalize and each province has to be assessed separately. " In the northwest province (Khyber Pakhtukhwa)," says Steinmann, "life is normal. People have begun working on their fields and people are back in their villages. The reconstruction is on its way but it is still in its initial stages."

One problem is the minimal rate of progress in the flood affected areas. As Imran Shami of the international development organization, Plan International, told Deutsche Welle, "Most of the affected areas were already very low in the poverty index and have very low literacy rates...The people of the southern part of Sindh, who were affected were already marginalized." 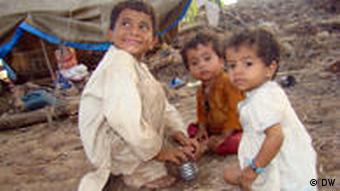 Khyber Pakhtunkhwa is stil better off than the other provinces

Most of these people, according to Shami, were illegally staying on patches of land next to the river and did not have any formal documents for the land they were living on. For these people, says Shami, poverty is extreme and they are the ones who are most worried by the prospect of more floods.

The situation is still tough

For Steinmann, many people in the provinces of Punjab and Sindh are still homeless because water from the floods has not been drained away. They are still living in camps and cannot start working on their fields. He says, "In Sindh, there is some shortage of food, it cannot be called a food crisis, the food supply within the country is somewhat functional, but it is a tough situation."

"Access to drinking water", says Steinmann is "still a big problem and could become a problem in the next monsoons." Parts of Sindh and Baluchistan, according to Steinmann, also face a lack of medicines and progress is very slow. The floods have also damaged the infrastructure in these areas: " The streets are unusable, broken bridges have not been repaired...And many areas were still under flood water until April and May this year ." 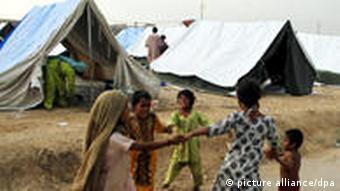 Furthermore, allegations of corruption and the inability of Pakistan's government to react quickly in the face of a disaster of this magnitude have compounded relief measures.

Kamal of the NDMA admits that the disaster could have been partially averted if provincial governments had been serious about operations and maintenance of the infrastructure: "At the district level, the biggest issue which came up was that in the past, requirements for operation and maintenance were not met and that is why the damage occurred. Which means that if we want to be safe from such disasters in the future, we will have to design our structures keeping in mind what happened in the floods in 2010...All the provincial governments will have to budget specifically for operation and maintenance."

Pakistan wrecked by floods and terrorism in 2010

Since devastating flash floods hit Pakistan this summer, there has been a debate about the impact on the political situation. NGOs and activists recently met in Berlin to assess the situation as winter sets in. (03.12.2010)

Three months after one fifth of Pakistan was flooded, millions of survivors still have no roof over their heads. Aid organizations have called for urgent international help ahead of the winter. (29.10.2010)