Swiss daredevil Freddy Nock has set a record for the world's highest tightrope feat - atop Germany's tallest mountain, the Zugspitze. With no nets or safety ropes, the stunt was dangerous but for a good cause. 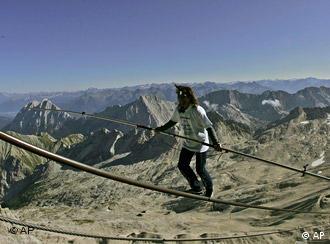 At least the view up there was nice

Professional tightrope artist Freddy Nock on Sunday walked across 995 meters (3,264 feet) of cable, which is otherwise used to pull the aerial tram up the Zugspitze mountain, located in southern Germany near the Austrian border.

Nock's challenge was not just horizontal, but vertical as well. With the cable strung at a 56 percent incline, he increased his altitude by 348 meters over the 50-minute journey. His final destination at the mountain tram station was located at an altitude of 2,943 meters, setting a world record for the highest tightrope walk. 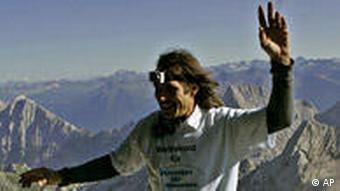 Nock's dangerous feat was for a good cause

During the walk, Nock was suspended at up to 130 meters above ground. As he used no safety gear, the endeavor could have ended quite differently for Nock.

Some 1,800 spectators turned out to watch the tightrope act - Nock's second, after a first attempt on Saturday was interrupted due to bad weather conditions.

Through the event, over 13,000 euros in donations were raised for the charity "Menschen fuer Menschen," which runs rural development projects in Ethiopia.

Two German men in their forties died of exhaustion and a further six were hospitalized after a 16-kilometer (10-mile) mountain sprint on the Zugspitze, Germany's highest mountain. (14.07.2008)

A pilot has successfully landed his plane on Germany's highest mountain in the first such landing in 50 years. (04.05.2008)