Thousands of steelworkers have come together in the western German town of Bochum to tell executives they are opposed to a merger between ThyssenKrupp and Tata. Plans for a tie-up were announced earlier in the week. 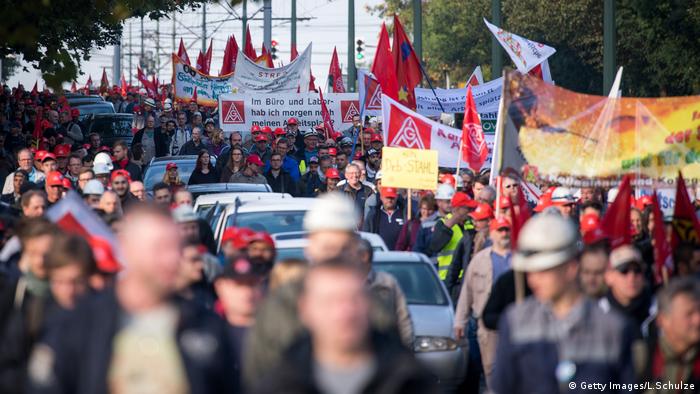 Following the signing of a memorandum of understanding between Germany's ThyssenKrupp and India's Tata on merging their European steel operations, some 7,000 German steelworkers took to the streets in the town of Bochum on Friday to voice their protest about the planned tie-up.

Staff council members, trade unionists and policymakers joined the rally after steelworkers had largely halted production ahead of their protests.

Among other things, the merger foresees the slashing of 4,000 jobs, half of them at Thyssenkrupp.

The head of the German Trade Unions Confederation (DGB), Reiner Hoffmann, accused executives of ignoring the interests of employees, adding that possible alternatives to the merger with Tata "had not even been looked into."

Hoffmann demanded that all German steel-making facilities be left untouched, adding that there must be no layoffs.

The DGB president also criticized management's plan to headquarter the merged entity in the Netherlands, away from Essen, home to ThyssenKrupp's current headquarters.

German Labor Minister Andrea Nahles said ThyssenKrupp should put all relevant figures on the table and stop making decisions without the knowledge of employees. "The future of German steel is at stake," she warned in her address to steelmakers on the ground.

Nahles added the sector "must not become a victim of share value games."

ThyssenKrupp's staff council chief Willi Segerath announced there would be more protests in the weeks ahead.

"We'll not give them a chance to ignore us," he said, adding "there cannot be any solution without the active participation of employees."