Three earthquakes in 20 minutes caused landslides and building damage although no injuries were reported. Social media users shared images of the effects of the tremors. 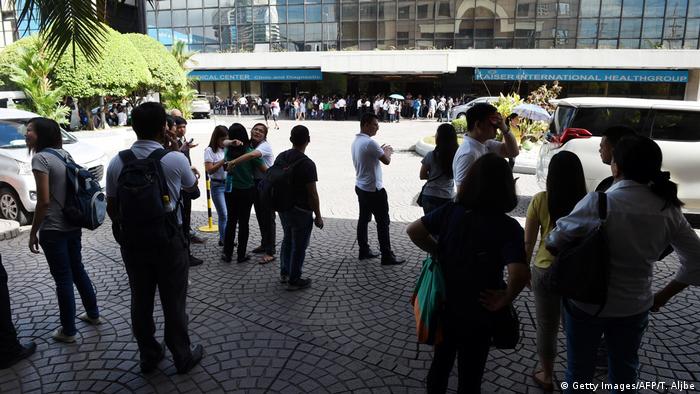 Predicting the future with supercomputers

2016 a record-breaking year for earthquakes in New Zealand

In 2016, New Zealand experienced a quake on average every 15-20 minutes. But one singular quake in November may have caused more damaged than all the others combined. (02.01.2017)

The quakes ranged in magnitude from 5.0 to 5.9 and struck Batangas province, about 90 kilometers (55 miles) south of the capital Manila.

The quakes happened over a 20 minute period, the USGS said.

The tremors damaged houses and buildings, and forced residents near the coast to evacuate their homes, a presidential spokesman said Saturday.

Ernesto Abella urged the public to "stay calm and yet remain vigilant and alert" as disaster relief officials assessed the damage.

The first earthquake, a magnitude 5.5, hit at 3 p.m. with an epicenter 40 kilometers north-west of Mabini, the Philippine Institute of Volcanology said.

The second tremor, a magnitude 5.9, had its epicenter 42.7 kilometers southwest of the town of Tanauan, according to the USGS.

A third, magnitude 5.0, had its epicenter 35 kilometers northwest of the coastal town of Taysan, the USGS said.

Hermilando Mandanas, governor of Batangas province, said residential and commercial buildings had sustained damage but there were no reports of injuries. Mandanas said people along the shoreline fled their homes.

Power outages hit Batangas and nearby provinces, including some portions of the capital. Landslides were also reported in some towns.

Several universities in Manila suspended classes for safety reasons, according to the Metropolitan Manila Development Authority.

Local television network ABS-CBN broadcast live footage of frightened commuters fleeing the passenger terminal at the port of Batangas, near the epicenter.

Renato Solidum, head of the Philippine Institute of Volcanology and Seismology, said the event was an "earthquake swarm" in a local faultline but had not been powerful enough to cause a tsunami.

"These swarms are natural occurrences and we do not expect a big quake in this area," he said.

The region has experienced tremors since earlier this week.

A slow-moving landslide is tearing apart a village in Italy