Thousands take to Berlin to protest EU-US TTIP accord | Germany | News and in-depth reporting from Berlin and beyond | DW | 10.10.2015

Thousands take to Berlin to protest EU-US TTIP accord

Tens of thousands have taken to the streets to demonstrate against a free-trade agreement between the EU and the US. TTIP, activists fear, would erode labor and environmental standards. Naomi Conrad reports from Berlin. 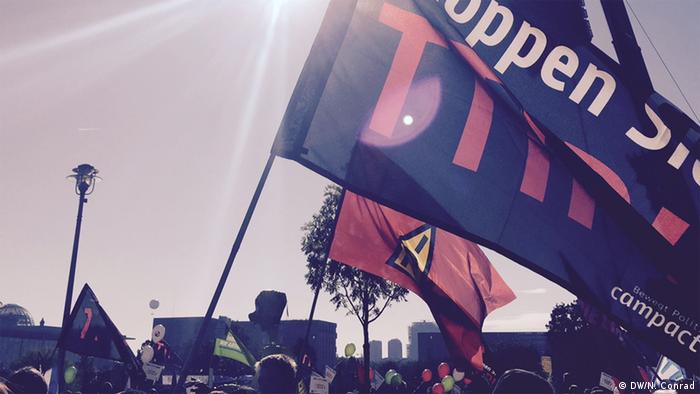 As the tram trundled through central Berlin on its way to the city's main train station on Saturday morning, an elderly man tried to smooth his slightly crumpled banner. Having completed his task, he proudly presented it to the other passengers: "Stop TTIP" in big bold letters. A young man looked up and grinned: "Oh, you're heading to the rally, too! Good for you."

Chatting animatedly, they disappeared into the throng of protesters clutching banners and flags who were milling around in the sun outside Berlin's main train station.

Inside, the station's cafes and takeaways were quickly running out of sandwiches: Tens of thousands had arrived from across Germany - many on trains and some 600 buses chartered for the occasion - to rally against the Transatlantic Trade and Investment Partnership, the free-trade agreement being negotiated by the European Union and the United States, usually referred to as TTIP. 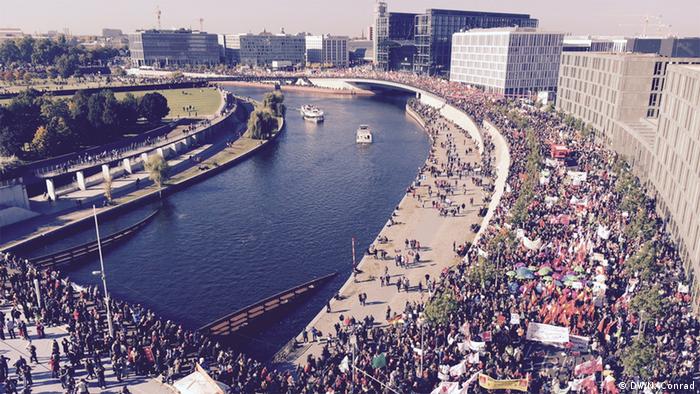 As many as 250,000 protesters gathered in Berlin, according to organizers

According to the organizers, as many as 250,000 people responded to a call to trade unions, environmentalists and anti-globalization groups, including Germany's opposition Green and Left parties, to protest against what many see as a deal designed with the interests of multinational corporations in mind.

The EU and US aim to conclude the negotiations, which began in 2013, by sometime next year. The next round of negotiations is set to begin later this year. Once completed, TTIP would create the world's largest free-trade zone, home to some 800 million consumers.

Campaigners are particularly concerned about a provision in the deal that would allow companies to sue governments in special tribunals. Such an arrangement, they fear, would lead to an erosion of labor and environmental protections. TTIP's supporters dismiss such thinking and argue that the deal would boost the EU's economy by removing tariffs and creating common standards.

Gerhard Handke, who heads the Federation of German Wholesale, Foreign Trade and Services, told DW that TTIP would even help uphold such standards. Europe, he explained, would soon be overshadowed by other economic players, such as India and China. "Now is the time to set standards, rather than have other countries dictate them later on," he said. "Otherwise, one day, we'll have Asia setting those standards, without anyone asking us what we think."

Those gathered in Berlin, though, take a very different view. "We have heard these promises before, these promises of jobs and prosperity and growth," Larry Brown, a trade unionist from Canada - which is negotiating a similar trade deal with the EU - shouted into a microphone on Saturday as demonstrators clapped and cheered and several police looked on. "They are lies. They have to be stopped.”

Clutching a black umbrella covered in "Stop TTIP" stickers, Martin Scherer told DW that he had come all the way from Karlsruhe to "show those economic powers that we won't let them get away with everything."

As two men dressed as the Ghostbusters - their neutrino wands pointed at an effigy of the trade deal - walked past, Scherer said he was particularly concerned that "we will have to put up with an influx of genetically manipulated goods from the US." His wife nodded vigorously. "We just don't want that," he added, raising his voice to be heard above the din as speeches boomed from several loudspeakers across the station forecourt and ever more protesters arrived. 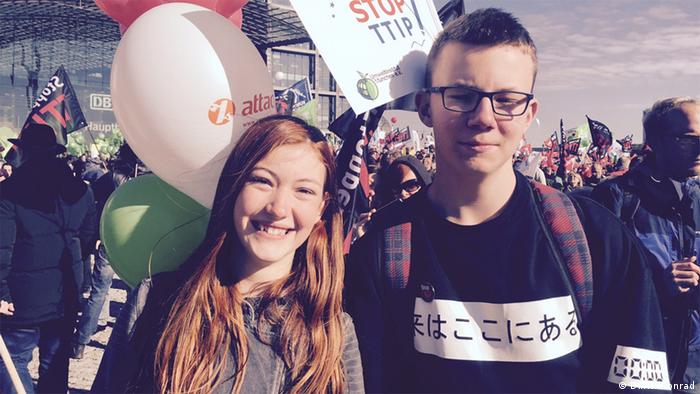 Clara and Louis: "They'll have to listen to us"

One of them was 15-year-old Clara, who said she had come all the way from Bavaria. "They want to destroy our future," she said, shaking her head emphatically. She said few of her friends knew or cared about TTIP, but was emphatic that they should: If implemented, she fears, "TTIP would destroy our democracy - because in the end multinational corporations would take all the decisions, rather than our elected politicians."

Her friend Louis nodded. "They'll have to listen to us," he said. "They can't just ignore so many voices." But, he added, he wasn't entirely sure that they would.

US lawmakers are cautiously weighing a massive free-trade deal sealed by 12 Pacific Rim countries. The accord faces scrutiny in the US Congress, which will vote next year on whether to ratify or reject the deal. (05.10.2015)