Tens of thousands of Danes have attended a memorial rally in Copenhagen for the two victims killed in twin shootings on the weekend. The gathering took place near the scene of the first attack. 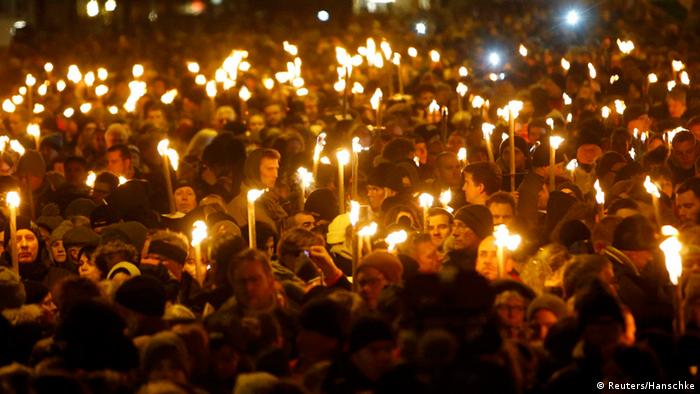 Speaking at Monday's rally, Danish Prime Minister Helle Thorning-Schmidt told the crowd that Denmark's "sense of community" would enable the country to overcome the threat posed by people "who want to harm us."

"It is a threat we will defend ourselves against through the strength that grows out of our sense of community," she said.

In view of the fact that a Jewish man was one of the victims, Thorning-Schmidt emphasized that Denmark stood with the Jewish community.

"Tonight, I want to tell all Danish Jews: You are not alone. An attack on the Jews of Denmark is an attack on Denmark, on all of us," she said.

'Not a cell member'

On Saturday, a 22-year-old gunman opened fire on a cafe hosting a debate on art and free speech, killing a 55-year-old man later identified as documentary filmmaker Finn Noergaard. He then attacked a synagogue, killing a Jewish security guard.

The gunman was later himself killed in a shootout with police in front of his apartment in the neighborhood of Noerrebro, a district with a large immigrant population and a reputation for gun violence.

Police have not officially identified the gunman, but said there was no indication that he was part of a terrorist cell or had traveled to Syria or Iraq to receive training with jihadists. Two men have been arrested on suspicion of aiding the attacks.

Danish media have however named the attacker as Omar Abdel Hamid El-Hussein, a Dane with Palestinian roots who was well-known to police for violence and weapons violations.

One of the speakers at the freedom of expression event that came under attack, Swedish artist Lars Vilks, has meanwhile been moved to an undisclosed location for security reasons, Swedish police said on Monday.

Vilks, who has received death threats for satirizing the Prophet Muhammad in cartoons, is presumed to have been the target of Saturday's attack. He escaped unharmed.

A police spokeswoman said that Vilks, who has been under police protection, was moved because "the security situation has taken on a completely new dimension."

"For security reasons, Lars Vilks can no longer live in his house and is at an undisclosed location," she told Swedish Radio.