Thousands protest against corruption in Brazil

Tens of thousands have taken to the streets in cities across Brazil to express disgust and outrage with public corruption. Some protesters have also called for the president to be removed, as well as members of Congress. 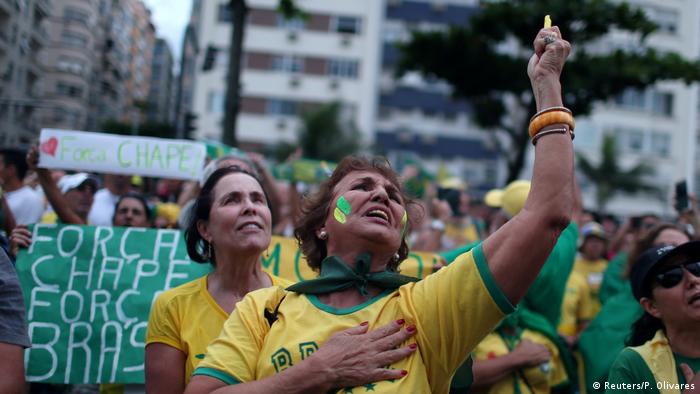 Tens of thousands of protesters across Brazil have called for a probe against corruption, dubbed Operation Car Wash, marching through the streets in cities around the country.

In Sao Paulo, Brazil's largest city, about 15,000 people dressed in the national colors of yellow and green marched down the financial area known as Avenida Paulista on Sunday, unfurling a banner that said "Corrupt Congress."

In a demonstration in Rio de Janeiro, where two former governors have been jailed on corruption charges, protesters waved banners with messages such as "We are all Sergio Moro," referencing the judge overseeing the investigation into a kickback scheme involving the national oil company Petrobras, several construction conglomerates and politicians.

Other protesters held signs calling for the removal of the president and leaders in Congress. In a statement, Brazilian President Michel Temer said the demonstrations showed "the force and vitality" of Brazil's democracy. 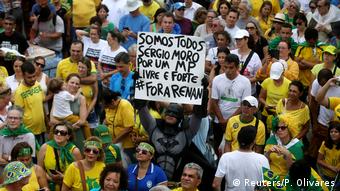 In Rio de Janeiro, a protester's sign reads: "We are all Sergio Moro, for a public prosecutor free and strong."

Temer is not well-received by Brazilians and has already lost four ministers due to corruption allegations. Earlier this week, Brazil's Supreme Court indicted Renan Calheiros, president of the Senate, over graft charges.

On Wednesday, there was public outrage over a hasty vote by the lower house of Congress to gut an anti-corruption bill, which made prosecutors and judges subject to punishment for alleged abuses of authority.

The vote prompted prosecutors in the Operation Car Wash case, which has exposed mass embezzlement and kickbacks, to threaten to resign.