Thousands of Egyptians flee Libya after IS beheadings video

Tens of thousands of Egyptians have fled Libya since jihadi group 'IS' posted a video showing the beheading of Coptic Christians, Egypt's Foreign Ministry has said. The Egyptian government is assisting in the exodus. 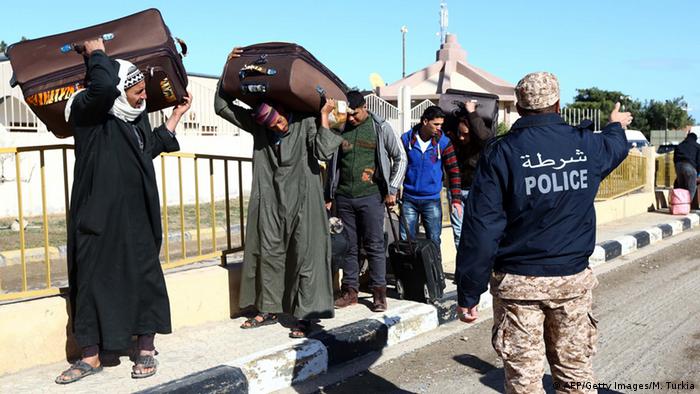 More than 25,000 Egyptians who have been working in neighboring Libya have returned home since the beheading video was broadcast earlier this month, the Egyptian Foreign Ministry said on Friday.

The ministry said some 21,000 Egyptians had returned overland through the Sallum border crossing near the Mediterranean Sea, while more than 4,100 others had crossed into Tunisia and were flown home on government-chartered flights.

The number accounts for only a fraction of the hundreds of thousands of Egyptians thought to be still working in Libya.

The mass exodus comes after Egypt carried out air strikes against jihadi targets in Libya on February 16 in retaliation for the execution of 21 Copts shown in the video.

Some 1.5 million Egyptians worked in Libya up to 2011, when a NATO-backed uprising against former dictator Moammar Gadhafi unleashed a wave of bloodshed that caused hundreds of thousands to flee.

The continued political instability and violent conflicts between rival militias in the oil-rich nation have led to a further reduction in numbers since then.