At least 30,000 Danish teachers have taken to the streets to protest a closure of schools that has stopped over 800,000 pupils attending classes. They were shut after a dispute over working hours last week. 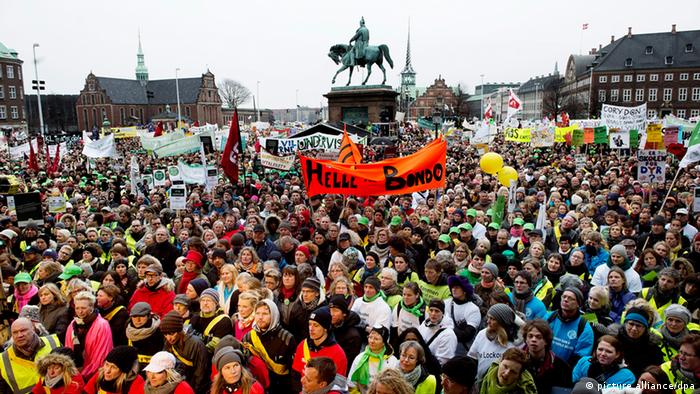 Traffic came to a halt in Denmark's capital Copenhagen on Thursday as thousands of teachers marched on parliament to demand that schools reopen.

At least 52,000 teachers and an estimated 875,000 students have been kept from attending classes since a lockout was imposed by municipal employers on April 1 after teachers rejected planned changes to working conditions.

Under a plan put forward by an organization grouping Denmark's 98 municipalities, tutors will be required to spend more time in the classroom and less time on preparatory work. Teachers argued that the new system would adversely affect educational standards.

"What is going on is just not reasonable," 27-year-old protester Kamille Soerensen told news agency AFP. "They are wrecking the schooling system and making our jobs so much more difficult. This is not what I signed up for."

With talks between Denmark's Teachers' Union and the grouping of local governments at a deadlock, the nation's parents' association has appealed for government intervention, saying the closure has caused childcare problems for many working families.

However, the government in Copenhagen has so far resisted calls to step in.

"I'm a parent myself, in fact to several children, so I know how difficult it is each morning to make things work out. But let me say as I have said all along: I don't think we should be talking about considering intervention in the current situation," Finance Minister Bjarne Corydon told Denmark's Ritzau news agency.

Thursday's demonstration was the biggest Copenhagen has seen since a notorious UN climate change conference in 2009 attracted some 30,000 activists. It comes in the wake of a number of mass protests launched by teachers in recent days. Earlier this week 6,000 teachers formed a 35-kilometer (21.7-mile) protest line along the main road between Copenhagen and eastern city of Roskilde. Protests have so far remained peaceful.