Tens of thousands of people rallied in the main square in Albania's capital on Friday, protesting the state of the economy and calling for a partial recount of ballots from last year's elections. 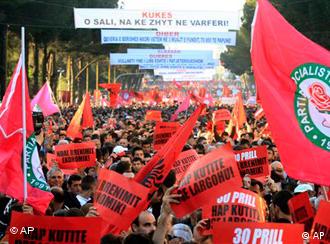 "The time of the resistance has come," Socialist leader Edi Rama told the crowd gathered in front of the Albanian government building in Tirana.

"We are determined to continue the protests and civil disobedience, to oblige the government either to be transparent in regard to the fraud-marked elections or to leave," he said.

Fatmir Xhasa, a Socialist deputy, told the protestors that 22 lawmakers would launch a hunger strike in front of the seat of government to demand election transparency.

The conservative Democrats, led by Prime Minister Sali Berisha, narrowly won the general elections on June 28 but have been hounded by allegations of vote-rigging ever since. In response, the opposition Socialists have staged a boycott, effectively stalling the government for months.

The Socialists returned to parliament in February, but still refuse to take part in any votes. They are calling for a recount of ballots in several voting districts, but the ruling government has rejected the demands as illegal.

The political deadlock has hindered Albania's EU ambitions – the country submitted its candidacy in April last year – and its plans to become part of the visa-free Schengen zone, which covers most of Europe.

Ambassadors have told Albania that its prospective membership of the EU is threatened by a political stalemate that has crippled the country’s parliament. A delegation is set to visit Tirana to help find a solution. (17.02.2010)

Demonstrators in Tirana are camping in a city square to demand a probe into election fraud and a recount. This will never happen, says the country's conservative prime minister. (21.11.2009)

While the central election commission has not made any official announcements, exit polls appear to indicate a win for Prime Minister Sali Berisha's Democratic Party over the Socialists led by Edi Rama. (29.06.2009)