Thousands in Bosnia mourn at anniversary of Srebrenica massacre | Europe| News and current affairs from around the continent | DW | 11.07.2010

Bosnia and Herzegovina on Sunday marks 15 years since 8,000 Muslim men and boys were systematically killed by Bosnian Serb forces in what became known as the Srebrenica massacre. But questions still surround the tragedy. 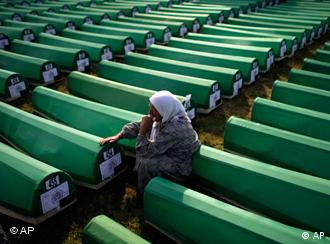 Hundreds of recently identified victims were burried on Sunday

Some 40,000 people gathered Sunday in the Bosnian town of Srebrenica, where the massacre widely described as Europe's worst atrocity since World War II occurred 15 years ago.

Srebrenica was a UN-protected enclave besieged by Bosnian Serb forces throughout the 1992-95 war. But UN troops there were quickly overrun when the Serbs entered the town, rounded up its Bosnian Muslim population and killed more than 8,000 men and boys.

As part of Sunday's ceremony, 775 recently identified massacre victims in coffins draped in green were interred at the Potocari war cemetery, where more than 4,500 are already buried.

Recognizing the international community's failure to respond to the bloody Bosnian war, Obama called the massacre "a stain on our collective conscience."

Also at the ceremony was Serbian President Boris Tadic, whose presence many Bosnians resented. Serbia has been criticized for its perceived reluctance to capture Ratko Mladic, the general who led the attack on Srebrenica. 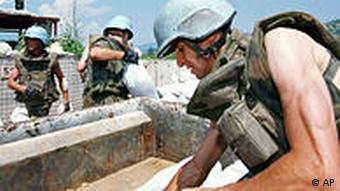 On Friday, thousands of people lined the main street of Sarajevo as trucks bearing more coffins passed through on the way to Srebrenica, some 100 miles to the south-east in eastern Bosnia.

In the Drina Valley, the remains of 8,372 victims of the massacre have been exhumed from 275 mass graves in recent years. So far 6,557 victims have been identified, and many more murdered Muslim civilians are still missing. The search is slow and tedious, as corpses were tossed into mass graves, often to be dug up again later with bulldozers only to be hastily buried again elsewhere.

Manfred Eisele, an army major general in the German armed forces responsible for planning the UN's peacekeeping operations from 1994 to 1998, said that 15 years after the Srebrenica massacre, it was still difficult to shed light on events.

He said he had doubts that those responsible in the UN Security Council had the power or the intention to guarantee the protection of the 40,000 Muslim civilians in the Srebrenica "safe area."

'They didn't prevent the drama'

Many analysts now place much of the blame for the genocide on the Dutch government. Fearing for the safety of its 450 soldiers stationed in the area, the Dutch government failed to order a UN-proposed air attack on Serb troops. The Dutch were easily overpowered and the massacre unfolded. 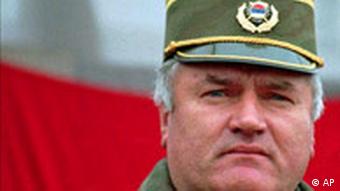 German lawyer Axel Hagedorn, who represents about 8,000 relatives of the victims, is trying to invalidate the UN's immunity before the highest court in the Netherlands, as well as the European Court of Justice.

"The UN has a clear responsibility, it should have decided against the Dutch," Hagedorn said. "If the UN had to go to court, then it would no longer be possible for the Dutch state to blame the UN, or the UN to blame the Dutch state, which is what's happening now."

The massacre of Srebrenica, but also the genocide in Rwanda and Cambodia, are seen as signs of the UN's failure. The United Nations still has not learned its lesson, General Eisele said.

"The readiness of states to take responsibility for hard-pressed minorities and also to recognize this protective responsibility is still dramatically underdeveloped," he said. "A direct consequence can be seen in the NATO deployment… for the Kosovo-Albanians, who were subjected to massive human rights violations by their own government."

Today, only about three to five percent of the population in Srebrenica is Muslim, most of them women still searching for relatives. Many families went into exile to Canada, New Zealand and the United States.

A German company pioneered the technology used to match up DNA fragments and they now collaborate with the International Committee on Missing Persons in Sarajevo to identify war crimes victims in Srebenica. (11.07.2010)

Serbian lawmakers have passed a landmark resolution condemning the 1995 massacre of Bosnian Muslims in Srebrenica, but the move won't go far enough for many of the victims' families. (31.03.2010)

Europe reacts to Srebrenica declaration with both praise and reservation

The Serbian parliament has narrowly passed a declaration condemning the killing of 8,000 Bosnian Muslims in Srebrenica. The declaration stops short of labeling the killings genocide, and for some, that is not enough. (31.03.2010)