Thousands Attend Opening of New Mosque in Germany | Germany | News and in-depth reporting from Berlin and beyond | DW | 26.10.2008

One of Germany's largest mosques with room for 1,200 was inaugurated Sunday in the western city of Duisburg with none of the recriminations that have soured a mosque building plan in nearby Cologne. 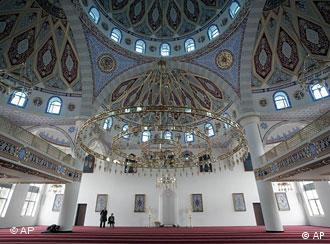 A glimpse of the opulent interiors of the mosque in Duisburg

Christian leaders spoke at the ceremonial opening and the City of

Police, who estimate that some 6,000 people attended Sunday's ceremony, said there were no protests.

In an inaugural speech, the premier of North Rhine Westphalia Juergen Ruettgers, affirmed the right of 3.3 million Muslims in Germany to build mosques as big as they liked.

"We need more mosques in this country, not in inner courtyards,

but visible and recognizable ones," he said. 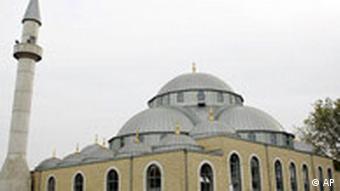 The opening of the mosque could not have been more different from the controversy surrounding a planned one in nearby Cologne. In that city, some civic leaders have charged that a planned mosque is "too big." The city witnessed violent rioting last month as far rightists vainly attempted to hold an anti-Islam rally.

Officials say ethnic Turkish Muslims form a major group in gritty, working-class Duisburg, an old coal and steel town, as opposed to their affluent, middle-class counterparts in Cologne, 55 kilometers away.

In the Duisburg suburb of Marxloh where the mosque was built, Muslims make up about one-third of the 18,000 residents.

The designers of the 7.5-million-euro ($9.4-million) complex forestalled German criticisms by including plate-glass windows to make the mosque's inner workings more visible.

There will also be no muezzin calling to prayer by loudspeaker from the Duisburg mosque's 34-metre minaret, a practice that some anti-mosque groups elsewhere have seized on.

The state government and the European Union pumped in 3 million euros in subsidies for the complex, which includes a community centre, café and the mosque itself capped with several Ottoman-style domes.

Another 4 million euros was contributed by Muslim faithful in an

The mayor of Cologne, who is a proponent of a disputed mosque in the west German city, has asked Prime Minister Erdogan to similarly support construction of a shrine for Saint Paul in Tarsus. (08.10.2008)

Entering a growing controversy about the building of a mosque in Cologne, Germany's Catholic bishops affirmed Friday the right of Muslims to build "dignified" houses of worship in German cities. (26.09.2008)