A new mosque has opened in Berlin -- the first in former East Germany. Just blocks away, some 300 people demonstrated against what they called the "Islamisation of Europe." 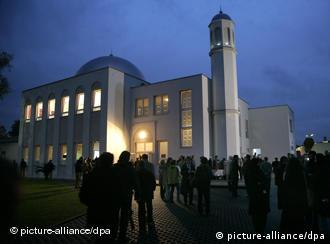 Built for members of the Ahmadiyya Muslim community, the mosque was inaugurated on Thursday, Oct. 16, with a celebration attended by approximately 300 people, including Berlin mayor Klaus Wowereit.

According to Wowereit, the mosque symbolizes "religious and cultural tolerance" in Berlin. His comments may have been overly optimistic, though, given that hundreds of protesting residents and the far-right National Democratic Party (NPD) were gathered only blocks away from the site. 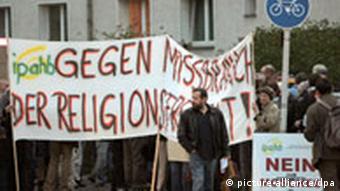 Protestors said they were concerned about the abuse of religious freedom

The demonstrators held banners with statements such as, "Stop the Islamisation of Europe" and "Stop the Abuse of Religious Freedom." A petition against the construction of the mosque had also gathered some 20,000 signatures.

The Ahmadiyya mosque has been a source of controversy since its building plans were announced in 2006, with attacks on the site hindering its construction.

Ijaz Ahmad, spokesperson for the mosque, is hopeful however that the new two-story building will help bring clashing Muslims and non-Muslims in Berlin closer together.

"The mosque will be a hub of social activity, not just for praying," she said. "It will play a role in boosting integration and promoting dialogue with politicians and other religious groups."

A local citizens' group doesn't seem to see integration in the cards though. "We have a big problem with sects that put religion above everything else, allow the beating of women and deny equal rights," the group said on its Web site.

Berlin is home to about 220,000 Muslims, with only 200 belonging to the Ahmadiyyah community. Ahmadiyyah's Muslim roots are a source of debate, however, as it is not recognized by some mainstream Muslim groups on account of different beliefs.

According to the Ahmadiyyah group, it has 30,000 members in Germany, many of whom came to the country seeking asylum from religious persecution in Pakistan and other Islamic countries.

Allegations of police brutality and human rights abuses by law enforcement officers in the German city of Cologne have surfaced in a news report. (24.09.2008)

Muslim missionaries found in Western cities are often part of the messianic Ahmidiyya movement. The peaceful beliefs of Ahmadis, who can be found in small numbers in Germany, are seen as heretical by most Muslims. (26.05.2008)

German police have arrested 15 far-right extremists and five counter-protestors in the latest round of clashes over the controversial construction of the first mosque in the former East Berlin. (12.07.2007)