Thousands at Cologne Anti-Violence Rally | Germany| News and in-depth reporting from Berlin and beyond | DW | 21.11.2004

Some 20,000 people took to the streets in the western German city of Cologne on Sunday, waving German and Turkish flags, to protest against the use of violence in the name of Islam. 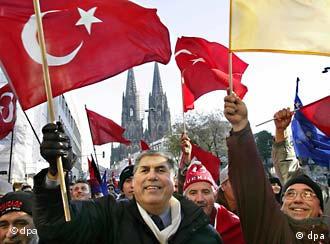 The marchers had two starting points -- a mosque and a cathedral -- and converged in the middle of the city for the event organized by the Islamic-Turkish Union with the slogan "Hand in Hand for Peace and Against Terror."

The interior ministers of North Rhine-Westphalia and Bavaria, Fritz Behrens and Guenther Beckstein, attended the event, as well as Greens co-president Claudia Roth. 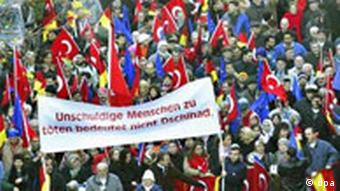 Killing the innocent is no holy war, reads the sign.

In the wake of the killing in the Netherlands of filmmaker Theo van Gogh by a suspected Islamic extremist early this month, various initiatives have been launched in Germany to better integrate the three and a half million Muslims who live in the country.

A wave of anti-Muslim attacks broke out following the Dutch filmmaker's murder, prompting fears that violence could spread over the border to Germany. 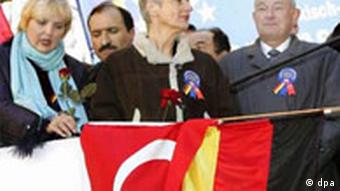 Marie-Luise Beck (photo, center), a government expert on migration, refugees and integration, said the protest as "a clear and necessary signal. We are all in shock over the brutal murder of Theo van Gogh and attacks on Muslim establishments in The Netherlands."

On Saturday, Chancellor Gerhard Schröder called on Muslims to better integrate themselves into German society and warned over what he called a "conflict of cultures."

According to the national statistics office, in the first half of 2004, one immigrant in five in Germany was unemployed compared with a national average of one in 10.