Former Germany star Thomas Hitzlsperger remains one of the few footballers to have come out as gay. In an exclusive interview with DW, he explains that gay footballers still face many barriers to acceptance.

Hitzlsperger and the media

Thomas Hitzlsperger is a former Germany international, winning 52 caps between 2004 and 2010. A former member of the Bayern Munich academy, he made his name at Aston Villa in the English Premier League, where he gained the nickname 'Der Hammer' for his lethal left-footed shot. After a career that saw him play in Italy and Germany, Hitzlsperger made headlines when he revealed he is homosexual. DW's Matt Ford talks to him about his life after football and homophobia in the game.

Part one - Life after football

DW: What choices does a modern professional footballer face when he finishes his career?

Thomas Hitzlsperger: It depends on the player, there are many different choices. You've been a football player so hopefully you don't need to worry about money so you can go out there and choose what you want to do. That's a great luxury. It depends what you're interested in. Most players go back to football, they do their coaching badges, they go into media and they stay in the game. But I think footballers have more opportunities these days.

Do clubs take better care of their players these days?

I hope so. For me, still being part of the game and working for Stuttgart, that's one of the main things I want to bring into the club because I think it's very important that clubs look after their players and educate them early on.

I want to pass on my own experience to young players. I want to tell them how difficult life after football can be. Your agent might leave you because you're not making him money any more. People might not be there for you because you're not a famous football player any more. It's very important role for a club to educate their players and prepare them for life after their career.

What have you had to learn in your media work?

There is the notion that it's easy to rock up in front of the camera and talk about your career and the game but it's difficult! You have to learn about the game. You have to work hard, even harder than when you were playing and not every player is willing to do that.

Do you now see the game differently?

Of course! As a player, I would prepare myself for training sessions and focus on my own game. But now, there doesn't seem to be a limit. You can watch almost any game on this planet and it's difficult to decide what is important and what is not - while also finding time to switch off a little bit. It's not easy to find that balance and that's what I'm trying to figure out at the moment!

In a previous interview, you said that every young footballer needs that one unique talent which makes them stand out. What unique talent do you bring to your punditry?

I've played in three of the top leagues in Europe: Serie A, Bundesliga and the Premier League. The fact that I speak both English and German in front of the camera is certainly not a negative, either. And I have a curiosity. I've always wanted to learn throughout my career and that hasn't stopped yet. I think that's a good quality - but the competition is tough.

Your colleague and friend Philipp Lahm is ending his career. What unique qualities can Philipp bring to football after his career?

There aren't many players who are better than Philipp Lahm. It's always a joy watching him play. He's mastered his position, he's mastered his football. I've had the privilege to have played with him. He knows so much about the game, he thinks in great depth about it. It's inspiring to listen to him talk about football. That is a huge talent.

He knows Bayern Munich inside out. Would he be suited to a role similar to your current position at Stuttgart?

Well, there was that discussion and he's decided against it - for now! But I think he will always be part of football. I'd be surprised if we don't see him again! In what role? That's for him to decide. Maybe he'll take a break and see what else there is out there apart from football and then he'll come back one day - I'm sure he will. 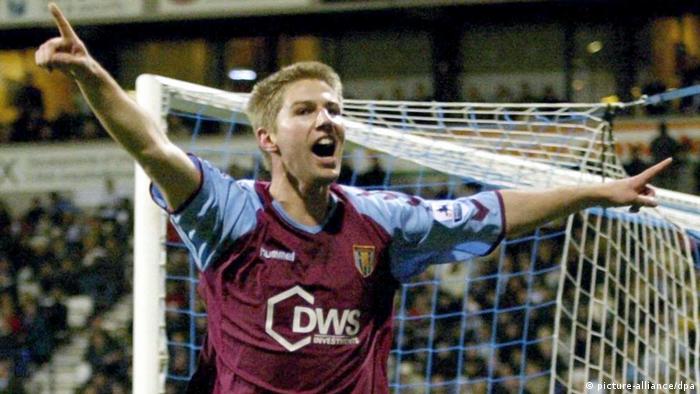 Hitzlsperger made his name at Aston Villa in England before spells in Italy and Germany.

DW: You recently spoke at the FIFA Conference for Equality and Inclusion. You told Clarence Seedorf that, while homophobia remains an issue, it's important that footballers as role models stand up. What, in your opinion, prevents gay footballers from standing up and being open about who they are? What holds them back?

We also don't know what the reaction would be from the fans - where there seems to be a certain fear. But we don't know if that's true or not because we haven't seen it yet in a major European football league. And that certainly holds people back.

What do you mean when you say there's a fear about how fans would react?

It's hard for me to say because I came out after my career finished but that's what I've heard for a few years now. When I started to think about coming out, I wondered what effect that would have. People said there would be aggression and insults from the terraces. But I can't prove that, nobody knows until somebody is brave enough to come out while he is still playing. We've seen it in other leagues across the world but not in one of the major football leagues in Europe and that's what people would like to see to find out what the reactions would be.

Do gay footballers think that coming out could hinder their career progression?

Possibly, yes. But players aren't isolated - you have an agent, friends and family, so it's not a decision anyone takes by themselves. You consult people, you ask what they think. But then in the end, you might have more people advising you not to come out because of that risk. So that's why I think that a lot of people who have thought about coming out then decide it's probably wiser to leave it until after their career. That's a possibility.

FIFA has awarded the World Cup to Russia and Qatar - countries which hardly have outstanding track records when it comes to gay rights. Does that send the right signal?

I think in future, they need to consider human rights in general. The criteria when awarding these tournaments shouldn't be limited to questions of good stadia and infrastructure. Hopefully, FIFA will change that way.

Last week's conference was quite encouraging. I think change is possible but it's a good starting point. With the World Cup in Russia, FIFA has the opportunity to do what they think is right. I hope that during the games they use that space to educate people about what it really means to fight against discrimination and for equality. FIFA has huge potential in this respect.

How would you have approached a tournament like this as a gay player? Would it have affected you mentally, knowing what sort of views were prevalent?

I don't know how it will affect gay players who are not out. Obviously it's not great to know that you're going to a country where gay rights aren't very advanced. But FIFA now has the opportunity to make that change.

The power of football can be huge but you're not going to change the politics of an entire country. We have to use this opportunity to bring people together from Russia and the rest of the world and use it as a platform to talk about different issues - one of them being gay rights.

Hitzlsperger and the media

Bundesliga: How Matarazzo and Mislintat are shaping a brave new era at Stuttgart 19.08.2021

Stuttgart opened their Bundesliga season with a rout of Greuther Fürth. Tougher tests lie ahead, but their coach and sporting director are shaping an exciting new era for an old powerhouse of German football.

Bundesliga: Stuttgart's on-field progress tarnished by war of words off it 10.01.2021

Stuttgart continued their impressive return to the Bundesliga with victory away at Augsburg on Sunday. But behind the scenes, CEO Thomas Hitzlsperger is embroiled in an unsavoury internal dispute.