Ex-army officer Byron Lima who was serving a prison sentence for the 1998 murder of a Roman Catholic bishop has died in a jail riot in Guatemala. Another 11 inmates and a female visitor were also killed in the incident. 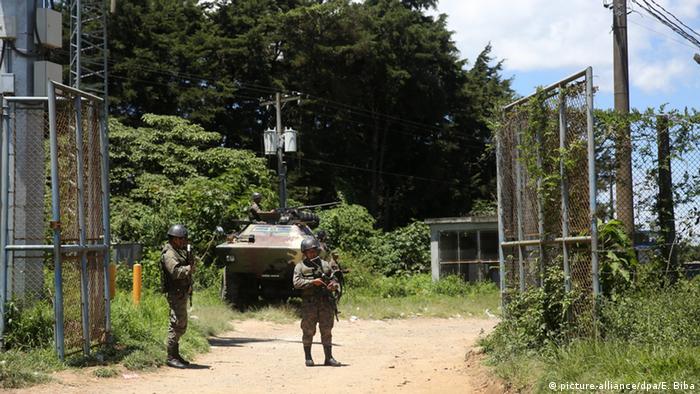 Convicted murderer Byron Lima was among the 13 people killed on Monday after a riot broke out at Pavon prison, close to the capital, Guatemala City.

The ex-soldier was sentenced in 2001 to 30 years in prison for killing Roman Catholic Bishop Juan Gerardi almost two decades ago. Lima's sentence was later reduced to 20 years.

Gerardi was bludgeoned to death with a concrete block at his seminary on April 26, 1998, two days after he presented a report blaming the military for most of the 200,000 deaths in Guatemala's 1960-1996 conflict.

Interior Minister Francisco Rivas said Monday's riot involved a fight between Lima's inmate group and a rival gang headed by Marvin Montiel, who was sentenced in 2008 to 820 years in prison for the murder of 15 Nicaraguans and a Dutch tourist.

Four of the dead had been decapitated, Rivas said. An Argentine woman who regularly visited Lima in prison was also among the dead.

Lima had been considered the most powerful inmate in Guatemala's prison system. He was also facing additional charges for his activities behind bars.

Prosecutors allege that Lima built a multimillion-dollar illicit prison empire based on threats and corruption. They said Lima took money from other inmates in return for favors such as access to prohibited cell phones and appliances, as well as special food and conjugal visits.

Three former government ministers have been arrested in Guatemala on corruption charges. All served under former President Perez Molina, who is in jail facing charges of money laundering and conspiracy. (12.06.2016)

Open-source software offers Latin American community radios a new tool for exercising their right to freedom of expression, says journalist Santiago García Gago. He has been working with local radios for decades. (06.07.2016)

OAS calls for calm between Guatemala and Belize over border dispute

Guatemala has moved thousands of troops to its border with Belize following the death of a teenager. The OAS has called for calm in the neighbors' dispute, whose origins go back more than a century. (23.04.2016)

After 13 people were killed in a massacre over the weekend, grieving families blocked a major Guatemalan road. They used the coffins of the deceased to call attention to systemic violence.

Mexico has seen four journalists murdered in one month alone. At least three of the victims had asked the state for help. Has the country’s protection program for journalists and human rights defenders failed?