Airbus has unveiled a conceptual flying car called Pop.Up, showcasing its futuristic vision of how to fly over crowded city streets. Mathias Thomsen, Airbus' manager of urban air mobility, talks to DW about the project. 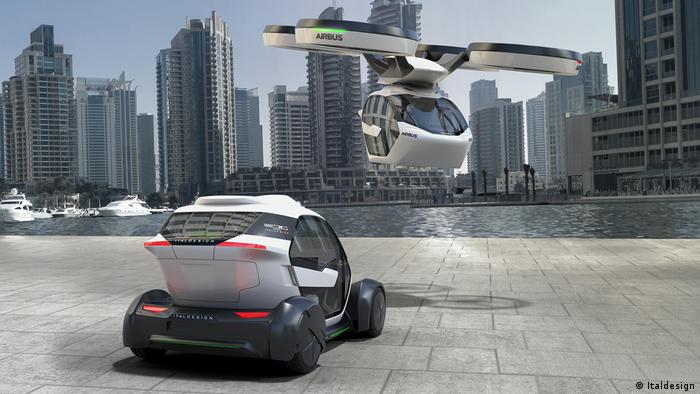 DW: The Pop.Up, a capsule that can connect with a driving module as well as a drone-like airborne module, is a cooperation project between Airbus and the transportation company Italdesign. What is the division of labor like?

Mathias Thomsen: We call it a research partnership because really it's been an exploration of new urban mobility concepts. We can see that the automotive industry and the aerospace sector, which we represent, are converging quite a bit when it comes to new mobility technology.

Italdesign is a reference point for the automotive sector when it comes to innovation and engineering. And on our side, we are working on urban air mobility, which is about using the city sky to go from A to B. So we joined forces and looked at different concepts and came up with Pop.Up together.

How flexible is the zero-emission Pop.Up vehicle? Say I'm driving down a road and come to a stop because of congestion. Could the air module pick me up right there or do I need to drive to a certain spot for the connection? 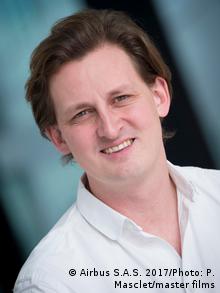 Thomsen: Pop.Up will map your perfect route on the road and above it

At the point of ordering your transportation service, the Pop.Up system will help you choose the best combination of modes of transport, depending on the urgency of your trip and your willingness to pay for different modes. In case you're not in a hurry, maybe you'll drive or do an intermodal connection if it's a longer trip. If you are in a hurry, or if you need to cross a part of town which is very congested, air mobility could be added. So this would be a seamless journey that you order - the different modes would be combined and optimized.

So could the air module pick me up anywhere or is the idea to set up certain spots where you can switch from one to the other?

Such a service is likely to start with certain take-off and landing areas which are fitted with infrastructure to charge or handle the electric vehicles. But in addition to these "verti-ports," as we call them, it should also be possible over time to be picked up and dropped off at any place where there is enough space. So it will likely start with a few number of locations and then over time grow into many more locations.

What about the organizational side of things? Would I have a membership where I can use Pop.Up whenever I need it, or is it more of an Uber model where I pay per trip?

The concept is envisioned as a mobility service that you request with an app or another device and then you're simply picked up and dropped off where you want to go. But the model could also change. Maybe the capsule can be changed and customized to yourself, while the ground modules and air modules are likely to be operated by mobility service providers.

At which height would the air module and capsule fly?

They don't need to fly very high as long as they clear the city buildings. They just need to fly high enough so that they're not a nuisance for anyone. The exact configuration of the airspace remains one of the topics to be determined together with cities and air traffic managers, who are responsible for safe navigation in the air.

That brings me to the next question: are you considering road structures in the air to avoid collisions? These things can go pretty fast, after all - 100 kilometers per hour. They can't just fly wherever they want, especially when more and more of these vehicles go up in the air.

That's correct. The safe route management of air mobility will require new software-based air traffic control. Today the air is still managed by air traffic controllers who are directly in contact with pilots aboard aircrafts. In the future where vehicles like these are self-piloted, the connection between the vehicle and the air traffic system will happen via software and algorithms. Pop.Up would also have to work together with other flying vehicles and objects like perhaps smaller packaging drones. 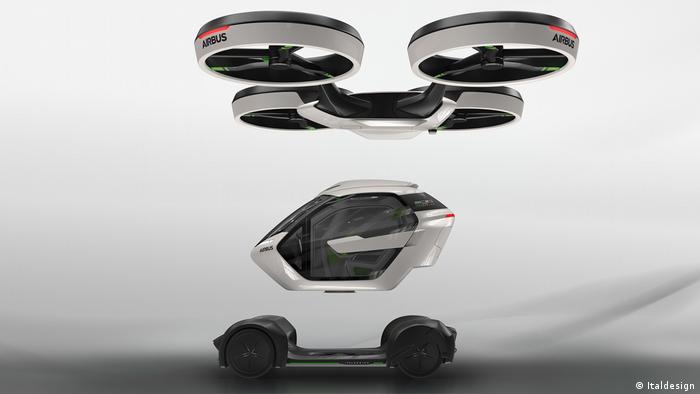 The Pop.Up in three parts: the capsule in the center can connect to either the ground- or the air module

The Pop.Up vehicle would drive and fly autonomously, with the person aboard merely a passenger. So who is liable if an accident happens?

I think the question of liability and responsibility is a very important one and something that we are working closely on. The exact liability definitions and legal frameworks are not yet in place. It's an area that's obviously also being discussed for terrestrial autonomous vehicles like driverless cars.

We expect that over the course of the next seven to ten years, which is our timeline for a project like this, appropriate answers can be provided to these questions.

Who will own the user data that is to be gathered and stored by the vehicle and the mobility service provider?

Our vision here doesn't answer yet how these things are dealt with and by whom. It talks mostly about the service it can create. I think that's a question we will be answering over the course of the technology development.

What's the time plan for Pop.Up? When can I first use it?

At this point, Pop.Up is a study, it's a concept. We will use the feedback from the market, the press and all the people who are engaging in the discussion to develop our own thinking about the ideal urban air mobility vehicle. There is no specific plan to build the Pop.Up right now, but the positive interest we've experienced in the project is likely to influence our design thinking over the coming years.

'We have a real hoverboard'

When Oliver de Haas was asked to develop a hoverboard like the one in the movie "Back to the Future II," he was thrilled. In a DW interview, he explains how his floating skateboard - called "Slide" - works. (21.10.2015)

A new concept in flying cars