More often reported for his undiplomatic gaffes than his politics, Boris Johnson has been appointed as the UK's new foreign secretary. The world's media, politicians and social networks have responded accordingly. 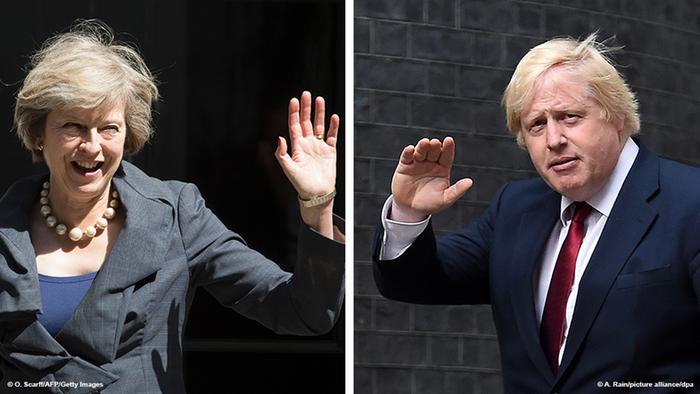 Since being appointed mayor of London in 2008, the former journalist has quickly made a name for himself as a controversial figure on the UK's political stage, more often than not to mocking from the press as well as fellow politicians both home and abroad.

In April, Johnson came under massive criticism when he recounted the story of a bust of former British Prime Minister Winston Churchill being removed from the White House to be sent to the British Embassy.

In his column for British tabloid "The Sun," Johnson said the decision was "a symbol of the part-Kenyan President's ancestral dislike of the British Empire."

US Democrat candidate Hillary Clinton was also the target of Johnson's column for "The Telegraph" in 2007 in which he ridiculed the US Secretary of State's appearance.

"She's got dyed blonde hair and pouty lips, and a steely blue stare, like a sadistic nurse in a mental hospital," Johnson wrote.

After inviting the new prime minister to Germany on Wednesday, German Chancellor Angela Merkel declined to comment on May's decision to appoint Johnson as foreign secretary, saying only that she was "looking forward" to working with May.

"People [in the UK] are experiencing a rude awakening after irresponsible politicians first lured the country into a Brexit and then, once the decision was made, bolted and didn't take responsibility," Steinmeier said during a speech at Greifswald University.

"Instead they went to play cricket. To be honest, I find this outrageous but it's not just bitter for Great Britain. It's also bitter for the European Union," he added.

In neighboring France, social media users expressed their surprise online. Twitter-user Claude Demougins tweeted: "Diplomacy according to Boris Johnson, new foreign secretary." Alongside the tweet, Demougins posted a cartoon of Johnson with the caption: "An elephant in a china shop."

Across the pond, US state department spokesman Mark Toner appeared to struggle to stifle a chuckle when asked about Johnson's new role. Toner said the US would always work with the UK due to the "special relationship" between the two countries.

"This is a relationship that goes beyond personalities, and it is an absolutely critical moment in England's history but also in the US-UK relationship," he said.

In China, one diplomat described Johnson's appointment as a "risky move," warning that May's decision had the potential to badly backfire.

Online, however, the Chinese were more interested in Johnson's ample head of hair. One user of Weibo - China's equivalent to Twitter wrote: "Just from looking at Boris Johnson, you can tell that British hairdressing isn't doing so well."

Back in the UK, politicians and members of the public were equally shocked. Labour Party MP and candidate in the upcoming Labour leadership contest Angela Eagle was left speechless as she heard the news live on camera:

On behalf of the UK public, British paper the "Daily Mirror" apologized to the world for their new foreign secretary, confirming with Thursday's front page that the "new PM's bombshell" wasn't a case of British humor gone awry.

'We need time' for Brexit, British Prime Minister May warns Merkel and Hollande

UK Prime Minister Theresa May has told her German and French counterparts she does not wish to rush Britain's exit from the EU. However, the new premier pressed on with the promotion of leading Euroskeptics to key roles. (14.07.2016)