The secret of black soil

Every day millions of people around the world literally flush away what could be one of the most valuable resources when it comes to growing food. Environmentalists like Dennis Raetzel are trying to change that. 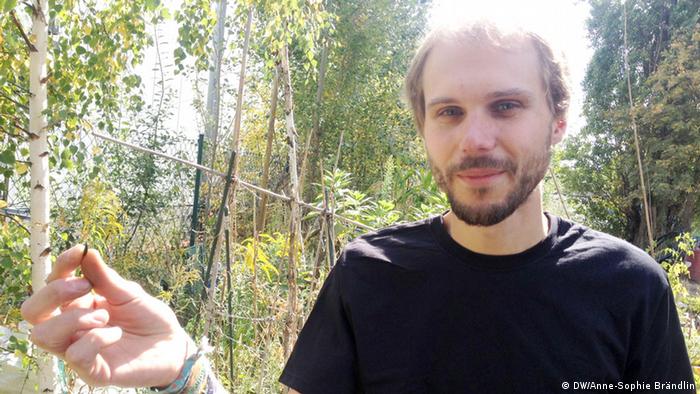 At a vegetable garden tucked away behind an old metal factory building in an industrial area in eastern Berlin, Dennis Raetzel tends to his plants. He walks along the 40 raised beds made of old wooden crates.

"These are called 'tomatillos' - they're green tomatoes from Mexico. We also have corn and pumpkins," he says.

This urban garden might look like any other in Berlin, but there's something in the soil that's different. Raetzel, a physicist by trade, is currently working on a project he thinks could change the way we grow food.

"Terra Preta is a solution, because you can be really, really efficient with the production of vegetables and food." 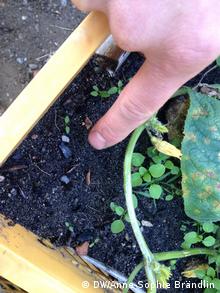 Terra Preta, meaning black earth in Portuguese, has been used in the Amazon Basin for centuries, if not millennia. Indigenous people used to mix charcoal with organic matter to fertilize their soil. And it worked, says Thomas Thornton from the Environmental Change Institute at the University of Oxford School of Geography and Environment.

"Terra Preta has existed in horticultural and small-scale agricultural societies throughout the globe for thousands of years, and it has proven to be a very successful way of enhancing soils for the production of certain kinds of plants that have helped feed people."

The key ingredient in Terra Preta is charcoal. It stores carbon for a very long time and increases soil fertility of acidic soils. The other ingredient is organic matter - like kitchen waste - which ferments, creating a nutrient-dense soil layer called humus.

That's why Raetzel and his project partner, Gregor Pieplow, decided to make their own Terra Preta soil for their garden. Next to their urban garden is an artist's workspace with a large, communal kitchen. They collect kitchen waste in buckets. Once a bucket is filled, the layers of organic material and charcoal sit in a warm, airtight container for about a month. The mixture is then brought to the garden, and with the help of worms and other organisms, it's converted into Terra Preta soil. 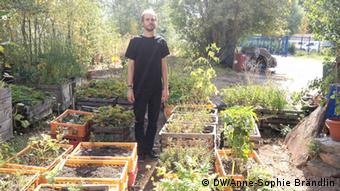 "Usually that would just go into the trash," Raetzel says. "But now we're producing good soil for our garden, and we're taking the vegetables from the garden to cook in the kitchen. So in the end, we establish a cycle."

But now he plans to add a new ingredient into the mix: human waste. He wants to make nutrient-rich soil from the very stuff that's flushed down the toilet every day.

"In our excreta is, obviously, all the material that you need to grow the vegetables. But now, we're just flushing it away."

The Berliner wants to convince people to rethink the way we handle human waste - to view it as an important resource. He says Terra Preta could solve some big problems with the way we grow food, dispose of waste and treat our soil.

And experts like Thornton agree. Thornton says if we produce soil locally, we can reduce the negative impacts that packaging and transportation have on the environment.

"If you're able to produce soil locally, that could result in a much lower carbon footprint, and also a much better recycling of resources within the local economy. So you're both eliminating waste and developing richer soils." 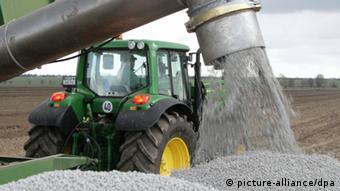 What's more, farmers wouldn't need to use phosphate as mineral fertilizers if they produce their own Terra Preta locally, says Thornton - an important consideration, given that phosphate will run out one day.

"There are certain biophysical limits within which humans have to live, and when we begin to cross these boundaries - whether it's the release of greenhouse gasses at too high a level - we are going to catastrophically change the system in which we live."

Some of these planetary boundaries, he adds, have to do with soil quality - including levels of available nitrogen and phosphate.

In some parts of Germany, the technique is already in use. A low-flush Terra Preta public toilet was installed at Hamburg's main train station in 2012. The toilet looks just like any other public toilet, only it functions differently - by separating the feces from the wastewater. The feces are then used to produce soil fertilizer. So, what gets flushed down the toilets at Hamburg's main station, eventually ends up as fertilizer strewn on the surrounding fields. But not before it's treated.

Ralf Otterpohl, a wastewater expert at Hamburg University of Technology, was involved in creating Hamburg's main station toilet."All this treatment is recovering nutrients, and it can also eliminate the micro-pollutants, like pharmaceutical residues, the synthetic hormones from the pill and other stuff. So the whole system will produce fertilizer components in a very clean form." 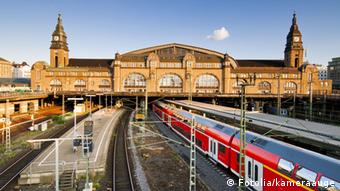 For the moment, though, the Terra Preta toilet in Hamburg is still in an experimental phase. "We propose to not take fecal compost for food right away - we're suggesting we take it for cultivating trees and other non-food purposes. There's still a hygienic risk there."

Of primary concern are substances not ideal for human consumption: very long-lasting parasites, eggs or cysts that can remain in compost for years.

And that probably doesn't help Terra Preta's image. Most people just don't feel comfortable with the idea of turning human waste into something useful.

"It is a taboo, and it is a problem for people to be told about their excreta and how to deal with it. But if we could change this, we could make things much more sustainable," Dennis Raetzel says.

Thornton agrees that we need to change the way people think about waste. Rather than seeing it as unsafe and unhygienic, he says, society needs to re-conceptualize waste as something good for the earth.

And that's what Raetzel is trying to do. He and Pieplow have produced an unconventional documentary about Terra Preta sanitation, featuring an astronaut on the quest to figure out the best way to deal with our human waste.

"We're making the movie because people should see how easy it is to produce Terra Preta."

While experts agree that it's time for society to reconceptualize the way we think about waste and hope to introduce more Terra Preta sanitation on a large scale, they think it's unlikely that people will start producing their own Terra Preta from human feces in the near future.

Solar energy on the rise

Global investment in solar energy is on the rise. In 2014, sales of solar panels increased by 20 percent. Although German solar producers are struggling with Asian competitors, they remain optimistic. (19.01.2015)

For the first time in years, CO2 emissions in Germany are on the decline again. The increased use of renewable energy and a focus on energy efficiency have also brought lower electricity prices. (08.01.2015)