Why is nuclear fusion so difficult on Earth?

Nuclear fusion is considered a potential energy source of the future. It's clean nuclear energy. But what is it exactly, and why is it so difficult to generate? Let's start with the difference between classical nuclear fission and nuclear fusion.

Nuclear fusion means that two isotopes of hydrogen - called deuterium and tritium - merge together: they "fuse." And that leaves behind only non-poisonous helium and one single neutron, but no nuclear waste.

Huge amounts of energy caught in a plasma

Nuclear fusion takes place in the sun for example - or in a hydrogen bomb - and that's the big challenge for engineers - how do you control the high energy fusion process in a power plant?

That's what scientists have been working on since the 1960s. One model-fusion-reactor called Wendelstein 7-X has just started operating in the northern German town of Greifswald. It is not designed to generate a nuclear fusion reaction yet - so far it's just a specific reactor design that's being tested. 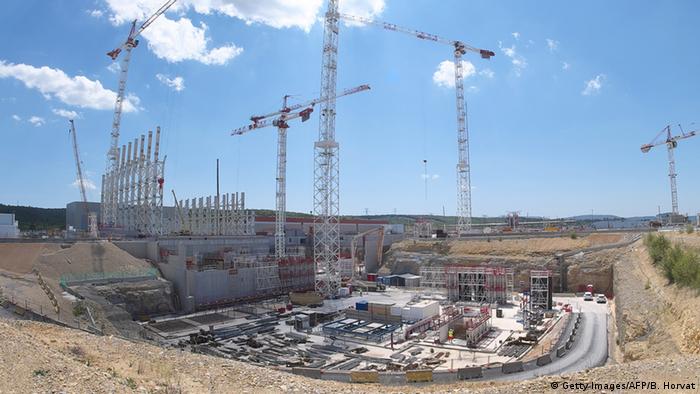 ITER will have real nuclear fusion in its plasma - once the plant is finished.

What all fusion reactors have in common is a ring-shaped form. The idea behind it is to take powerful electromagnets and create a strong electromagnetic field, which is shaped somewhat like an inflated bicycle tube.

That electromagnetic field must be so dense that when it is being heated by a microwave oven to about one million degrees centigrade, a plasma will emerge in the very center of the ring. And that plasma can then be ignited to start the nuclear fusion process.

In Europe, two prominent fusion experiments are under way. One is Wendelstein 7-X, which just generated its first helium plasma last week - albeit without actually going into nuclear fusion. The other one is ITER - a huge experimental project in southern France, which is still under construction and won't be ready to run before 2023.

ITER is supposed to do real nuclear fusion - but only for short periods of time, certainly not for any longer than 60 minutes. And ITER is just one of many steps towards turning the idea of nuclear fusion into a practical application.

Different reactor designers - first, developers from arms company Lockheed Martin and later a group of students from the Massachusetts Institute of Technology (MIT) went public this summer with new designs. They say they can build much more powerful and much smaller reactors than ITER and announced that such reactors could be on the market within the next decade.

The idea behind the new designs is to use modern high temperature superconductors for the electromagnets, which can be cooled with common liquid nitrogen, rather than using regular superconductors, which one needs liquid helium for. The new, more flexible technology would allow completely new reactor designs.

Klaus Hesch is skeptical. He is in charge of nuclear fusion technologies at the Karlsruhe Institute of Technology (KIT) in south-west Germany. Hesch also favors the new high temperature superconductors for new reactor designs. But, it is not enough to design something on your computer, just looking at the laws of physics - he argues you also need to look at challenges of putting it into practice.

"The model design of the MIT students shows what would be possible, if..." he argues "But actually it is a lot of science fiction. The design assumes that serious engineering problems have been solved - but we do not even have the slightest idea of how to solve them," he told DW.

One of those problems is the idea of "demountable coils." To be able to get to the inner ring - which holds the plasma - the electromagnets could be taken apart in the MIT-design model.

"That would be very useful, because, you would be able to get at things in the inner system - and to replace them. But the reality is: Superconductors are made of ceramic material," Hesch explained.

"Hundreds of them have to be woven in in a sophisticated way to form the right magnetic field," Hesch explains. And he points to a more fundamental difficulty: "The connection between them is not quite as simple as connecting some copper cables. Nobody has even thought about concepts to solve such problems."

The heat is also problematic. In the core of the nuclear-fusion plasma, the temperature would be around 150 million centigrade. This extreme heat stays put - right there in the center of the plasma. But even around it, it still gets seriously hot - 500 to 700 degrees at the breeding blanket - which is the inner layer of the metal tube that contains the plasma and which will serve to "breed" the tritium that is needed for the fusion reaction.

Even more problematic is the so called "power-exhaust." That is the part of the system, where the used-up fuel from the fusion process is being extracted - mostly helium. The first metal components hit by hot gases are called the "diverter." It can get hotter than 2,000 degrees centigrade.

The engineers are trying to use the metal tungsten, used in old-fashioned light bulbs - to withstand such temperatures. They have a melting point of around 3,000 degrees. But there are limits.

"In the case of ITER we can do it, because the heat is not there constantly. Only one to three percent of the time, ITER will eventually be running." Hesch says. "But that is not an option for a power plant, which has to run 24/7. And if someone pretends to build a smaller reactor with the same power as ITER, I can definitely say - there is no solution for that diverter-problem."

Nonetheless Hesch is optimistic that the development of nuclear fusion power reactors will go ahead - but not quite as fast as some of the industry optimists predict.

"With ITER we want to show that fusion can actually deliver more energy than we have to put into it to heat the plasma. The next step would be to build an entirely new fusion demonstrator power plant, which will actually generate electricity."

The engineers are already working on the designs now. They will have to learn lessons from ITER, which is scheduled to start operating in 2023. Taking the necessary time for design, planning and construction into account, it looks very unlikely the first nuclear-fusion power plant will be up and running much before the middle of the century.

An international consortium of scientists hopes the ITER fusion reactor in France could usher in a new era of nuclear energy, although many are concerned about its rising costs and the prospect of more nuclear power. (27.07.2010)

ITER involves a multinational effort to harness energy produced through nuclear fusion. This week, partner countries are meeting to push for progress amid massive cost overruns and project delays. (27.07.2010)

Recreating the sun's energy in a hamster wheel

German researchers believe that nuclear fusion can create a constant source of energy. They are so convinced that they're building a massive research reactor that generates power in the same way it's made on the sun. (17.03.2010)

Why is nuclear fusion so difficult on Earth?