The price of Kuwait's election boycott

The opposition in Kuwait boycotted Saturday's election, a vote that was won by Shiites and the government. Can parliament now avoid sectarian conflicts and move ahead with urgent reforms? 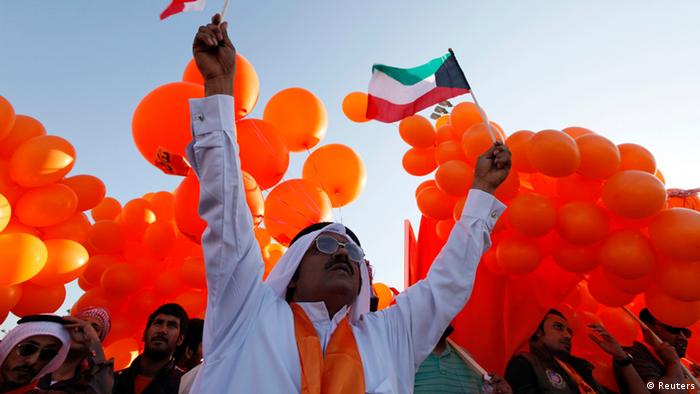 Ibtihal al-Khatib's boycott of Saturday's (01.12.2012) election in Kuwait almost caused her to lose people who are dear to her, friends and family members who could not understand why she didn't want to vote.

"It broke my heart, but my conviction simply was stronger," the professor for English literature told DW. Her conviction was that she had to do something against the "totalitarian decision of the government."

In October, Emir Sheik Sabah Al Ahmed Al Sabah changed the election rules to reduce the number of votes per person, from four down to one. The opposition, made up of Islamists, nationalists and liberals, claims the move was an attempt to influence the election result, as the changes also make it more difficult to strike up informal coalitions between parliamentarians – political parties as such are banned in the Gulf state.

Just last February, the opposition won a majority of 50 mandates. "Unlike in many other countries in the region, parliamentarians in Kuwait do have power, they do have the power to question and that has been some of the issue between parliament and government," said Mariwan Hama-Saeed of Human Rights Watch. 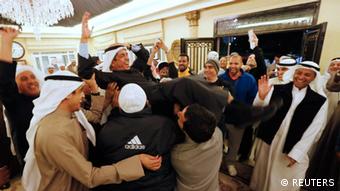 Shiite parliamentarians were the winners of the vote

Parliament has made use of that power, such as when two cabinet ministers were sacked due to pressure by the opposition. But the constitutional court in June dissolved parliament and reinstated the previous, pro-government parliament. The emir then called for a new election, but the opposition called for a boycott which led to violent protests in October.

The majority of Kuwaitis joined the boycott. Election turnout was only 39 percent, much lower compared to the usual 60 percent, confirmed Kristian Coates Ulrichsen of the London think tank Chatham House. But the boycott will be a high price for the opposition, believes al-Khatib – namely, the loss of representation.

"The election created a new political class," said Coates Ulrichsen. The clear winners were parliamentarians close to the government line, among them many Shiites who won 17 out of 50 seats. Only four seats went to Sunni Islamists; in the February election, they received 23.

Coates Ulrichsen is concerned that the "existing tensions between Sunnis and Shiites could escalate." The Shiite minority, closely linked with the royal family, largely ignored the call for the boycott. Critics like al-Khatib fear that Sunni hardliners might benefit politically from this development. 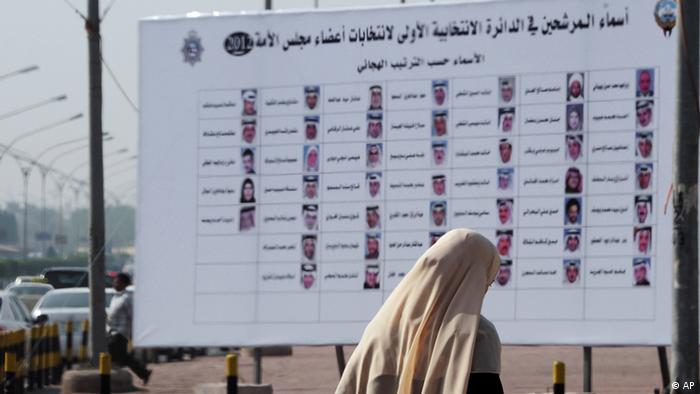 Since 2005, women in Kuwait have the right to vote. Three will now enter parliament

Already, many have taken clear positions, among them Nassar al-Sane. The secretary general of the Islamic Constitutional Movement, the Kuwaiti Muslim Brotherhood, has described the election and the subsequent government as "unconstitutional."

Instead of voting, he spent the day with other former parliamentarians who also refused to take part, discussing further protest activities. On Friday, tens of thousands of people demonstrated in support of the boycott, and Al-Sane is confident that soon there will be more protests.

The relationship of power between the democratically elected parliament on the one side and the government appointed by the emir will therefore continue, said Coates Ulrichsen. But, unlike in other Arab states, the power of the royal family is not being questioned.

"This is no revolution," said al-Khatib. But she calls for more power to be given to parliament and a democratic government. So far, all ministers except for one are named by the emir. The government could of course try to incorporate the opposition in order to defuse the conflict. But that, said al-Sane, would be something to which he wouldn't agree.

Coates Ulrichsen thinks the government could perhaps take some of the pressure out of the conflict. The way to do this would be to finally bring about some of the political and economic reforms that have been blocked for years, he explained. There are, for instance, urgent investments needed in the oil and gas sectors and in the country's infrastructure.

Reforms are also important for the democratic development in the entire region. The "constant bickering" between the different elements of power is an example to neighboring countries like Qatar, Dubai and the United Arab Emirates of how not to do things. "They will look at Kuwait and say: They've had a democratic system and are so far behind because they can never get anything done," said Coates Ulrichsen.

Al-Khatib is also calling for change, and soon. While the government and opposition see themselves as winners, it is the people of Kuwait who are losing out. Of that, the professor is certain.

Kuwaiti security forces have fired gas at thousands of opposition supporters gathered for an unauthorized demonstration against new voting rules. Electoral law was altered ahead of next month's parliamentary elections. (05.11.2012)