The political side of Carnival

Satirical portrayals of politicians and current affairs are an integral part of Carnival celebrations in Germany. It is an enduring and flourishing tradition, despite the occasional controversy sparked by such displays. 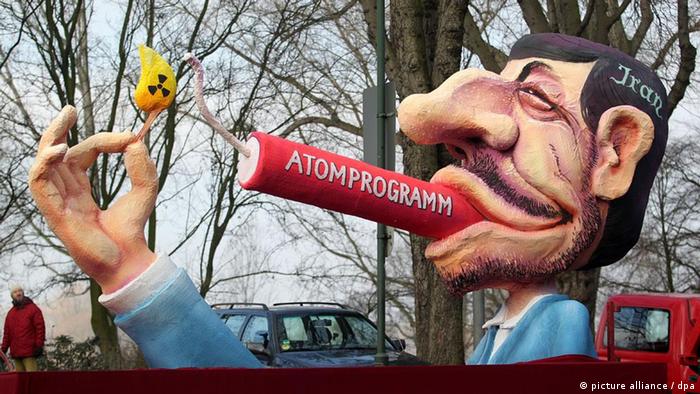 This year, German Chancellor Angela Merkel is being presented as the "mother pig" in a Carnival street parade in Cologne. On top of her are little piglets bearing the flags of EU countries in financial trouble. Meanwhile, Minister of the Interior Hans-Peter Friedrich is sitting on a toilet containing an exploding neo-Nazi bomb. This is humorously accompanied by the slogan "Arsch hoch!" - a phrase used in anti-neo-Nazi campaigns that literally means "Get off your backside!" but implies the need to take a stand.

But the political satire doesn't end at politicians - it targets organizations, too. The dove representing the European Union's Nobel Peace Prize is perched on top of crates of weapons destined for export. And a Swiss cow munches on euros from Germany while excreting CDs containing details of German tax evaders' Swiss bank accounts.

The satirical floats are the highlight of Carnival processions in the cities of Cologne, Düsseldorf and Mainz, which are the centers of the celebrations. They are constructed by artists who spend weeks preparing the 3D caricatures.

Staying out of trouble 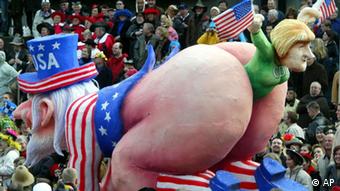 The float themes remain a secret until shortly before the party begins, and nobody is allowed to photograph them before then. This helps build curiosity and attract more spectators. After all, Carnival street parties are a multi-million-euro business. At the same time, the organizers want to avoid potential legal disputes.

According to Kay-Uwe Schreiber, a chair of the Mainz Carnival Association, legal quarrels are a "regular occurrence." He recalls many visits by lawyers to the float-making site and their threats to enforce alterations to the caricatures. However, no legal action has ever been taken.

It can get difficult sometimes, though. In 2000, the association wanted to portray former chancellor Helmut Kohl as the resident of a banana republic - in the form of a half-naked jungle dweller - due to his alleged involvement in the financing scandal surrounding his political party. In order to avoid trouble, the float makers decided to cover the caricature's short grass skirt and small penis by placing a pot plant in front of it. But the pot fell over shortly after the float started moving, attracting a swarm of photographers and causing a commotion.

A 2009 float portraying a nun behind a full-body scanner also created controversy. The nun wore stockings and a suspender belt, satirizing politicians' plan to install such scanners at airports for the purpose of detecting explosives.

Criticizing politics is an essential part of Carnival in Germany - and a badge of honor for those who make the caricatures. According to Schreiber, politicians "need to learn to put up with it." However, he admitted that topics connected with religion and the Church are particularly sensitive and likely to attract protests. The Mainz Carnival Association wants to avoid "big scandals" of this kind.

Other Carnival clubs expressed similar sentiments in interviews with DW. "We want to express criticism in a humorous way but not personally offend anyone," said Sigrid Krebs from the Cologne Carnival Festival Committee. 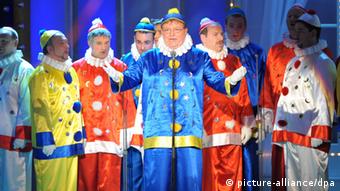 The Mainz Minstrels like to poke fun at politicians

Jürgen Dietz of the Mainzer Hofsänger (Mainz Minstrels) men's choir said that his organization doesn't claim anything that isn't true and doesn't insult anyone. For 30 years, he has been performing at Carnival events as the "messenger from parliament" and is well aware of politicians' sensitive spots.

"As long as you keep it fair, you can take a dig at someone every now and then," Dietz said, but added that some of his fellow Mainz Minstrels have withdrawn from carnival events in the past when faced with criticism.

A platform for exchange

To build a rapport with the public, many local politicians and political leaders make appearances at Carnival events in elaborate costumes. The relaxed atmosphere can set the stage for successful networking and even lucrative deals. Many small and medium-sized business owners are members of established Carnival associations and they are keen to mingle with politicians in this type of informal environment. Both sides tend to benefit from such exchanges.

The Aachen Carnival Association puts particular emphasis on interaction with political figures. Since the 1950s, the organization has been handing out what is probably Germany's best known Carnival prize. Loosely translated as "The Award of Opposition to Deadly Seriousness," it honors politicians who display humanity and humor in their work. The recipients include former West German chancellors Konrad Adenauer and Helmut Schmidt.

Since 1983, a group of Cologne-based cabaret artists has been organizing a "Stink Session" (Stunksitzung) - an event dishing out particularly bold and caustic criticism of public figures. No-one is sacred here, organizer Winnie Rau said: in the past, the group saved some of its most caustic criticism for the Roman Catholic Church and the local bishop. While politicians were used to this kind of treatment, church officials lodged charges, buildings were searched, and lawsuits were filed. But the group was vindicated in court: it was able to avoid any penalties by invoking its right to artistic freedom, protected by the German constitution. Meanwhile, all Stink Session performances have been sold out far in advance.

This victory over censorship harks back to the 19th-century Prussian occupation of the Rhineland - the home of the German Carnival celebrations. To poke fun at the behavior and strictness of the Prussian soldiers, the locals put on creative costumes and carried wooden guns with flowers protruding from the barrels. This was considered extremely bold and impudent at the time - something the Rhinelanders have tried to live up to in the years since.

Carnival season is a multi-billion-euro business

German carnival enthusiasts spend almost 2 billion euros during the carnival season. Whether it's money spent on food, beverages, costumes or hotels, carnival bastions such as Cologne like the extra corporate tax income. (07.02.2013)

A winter sports paradise, the Black Forest in south-west Germany also has its own unique Carnival celebrations. The pre-Lent festivities offer plenty of fun, but there is a darker side to Carnival here, too. (21.02.2012)