The Polarstern's journey to South Africa

DW kept up with the scientists on board a German research ship called the "Polarstern" as they traveled from Germany to South Africa in search of clues about climate change. 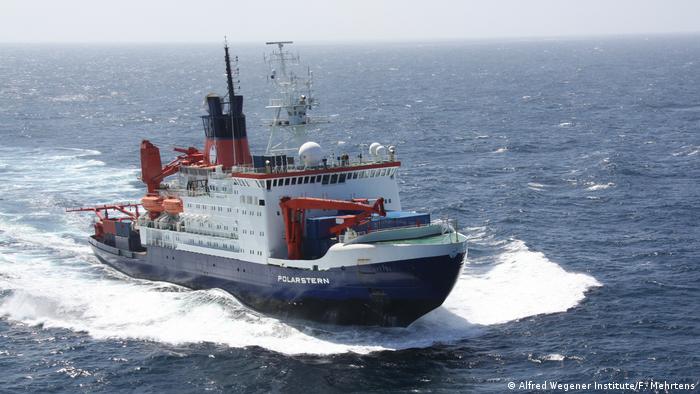 After four weeks on the high seas, the Polarstern has finally reached South Africa's shores. Now it's waiting for the next research trip to begin - in Antarctica.

Some of the scientists and scholars on board told DW what the experience has been like.

From the winch room to the "innards" of the ship - DW got a tour through the ship by scientist Annette Wilson.

What is it really like to work on a research ship?

On its journey from Bremerhaven to Cape Town, the Polarstern crew has been keeping us up to date on their progress. They have shared some stunning images, giving us an insight into daily life on a research ship and into the scientists' work.

As well as the crew and a large group of marine scientists, there is also an artist on board the Polarstern. Lionel Playford, a professional painter from Britain, is working with the students to see how a creative approach might be conducive to scientific research.

He spoke to DW about what the experience has been like:

How did you come to be on board the Polarstern?

I was invited by Professor Karen Wiltshire to widen my PhD research on art and climate science at Germany’s oldest marine science laboratory, BAH Helgoland. This led to the idea of joining the Polarstern's current expedition - to further this study and to help teach the scholars by offering drawing as an alternative way to think about nature.

Many years ago I used to design and build ships, so I feel very at home on the Polarstern. 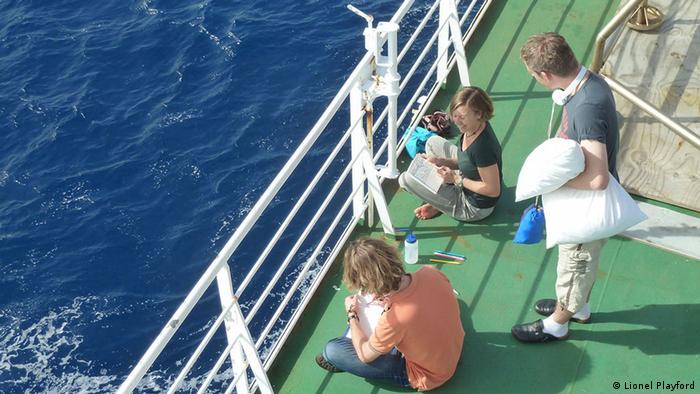 Not really. I have been an artist in residence in factories, offices and within city communities but never in such a high-powered situation as this - contributing to globally important research among some of the world’s leading climate scientists.

As an artist, what connection do you have to marine science?

The sea and what lies beneath the surface have inspired me since I was a young child. Professor Wiltshire is clear that if science is to communicate more effectively to a wider public audience, it needs to find novel ways to reach that audience, including bringing the creativity and imagination of art into the multi-disciplinary mix.

Does the sea evoke any particular feelings in you?

The sea is tremendously powerful for me and stirs up strong emotions in all its different moods. I adore moonlight on water - such a sense of timeless mystery - but it’s the feeling of immensity, simplicity and restless movement that does it for me. It’s as if the sea is a person. It’s the source of life and all things return to the sea in the end, so there is this pull that it has, despite being an alien environment for us. 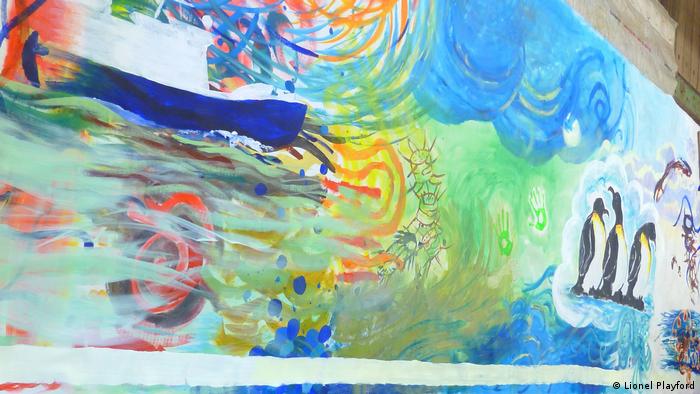 Are you concerned with climate change in your art?

I’m concerned that we’re rapidly creating an out-of-control planet with our pollution and destruction of the natural world. As a landscape artist, I must respond to this in some way to be an artist of my time. I have made major artworks for public exhibition in the UK based on a collaboration with climate scientists at Northumbria University in northern England.

After the physics of cloud formation was explained to me by some of the professors on the Polarstern, I looked at clouds in a new way. But more importantly, I now understand much more clearly why the weather around the world is changing and the seriousness of the problems we face over the next 20 to 40 years. I worry also for my children, of course.

What are you teaching the students on board?

We’re doing drawing then painting and even installation. I’m helping them to see that art and science both have a basis in observing the natural world in order to know it better, but that their aims and methods are different. Art is subjective and requires an imaginative response and I think objective scientists need that as a counterbalance to create some freedom of ideas and alternative possibilities.

Art can also help scientists express their feelings about what they see and what they think is going on in the world. It’s a personal thing usually but it can have a more universal attraction, so scientists can find intrinsic value in making art and they may also find a practical use for it in better communication. 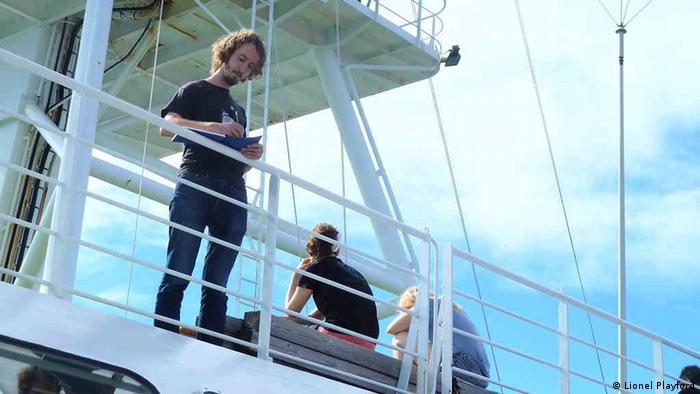 If you could choose one thing for the students to take away from their time with you, what would it be?

There’s never one thing - but seeing the world in a different but truthful way would be good.

Is it difficult to convince scientists that creating art could be beneficial to their work?

It depends on the personality and interests of the individual scientist. Some scientists might be more inclined towards music, others to poetry. As a visual artist I’m looking for scientists who believe that the beauty they see in nature is somehow linked to answering the questions of science. As Professor Lemke, who is also on board, reminded me the other day, beauty is related to pattern and symmetry in some way, just like in mathematics - so there we have an obvious link.

What medium do you usually use, and what are you using while on the Polarstern?

I usually paint with oils but on the Polarstern I’m using acrylics and aquarelle, because they dry quickly and there are no solvents. I have some oils too, which I would like to try out outside if I can find the time. 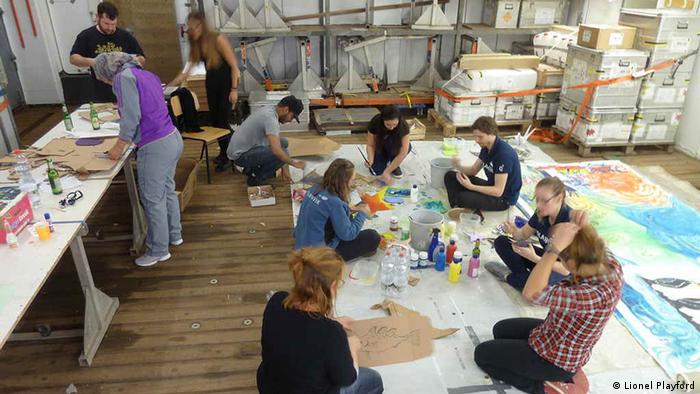 What is the most inspiring thing you have seen on the trip so far?

The full moon low in the sky suddenly emerging from dark low clouds in the night and sprinkling silver light in patches across the waters - and then it’s gone again into the black veil of clouds. I’ve attempted a painting of it but not succeeded in capturing the feeling. Maybe a musician like Debussy could do a better job.

Having stopped off briefly in the Canary Islands, the Polarstern is now making its way round the bulge of West Africa. 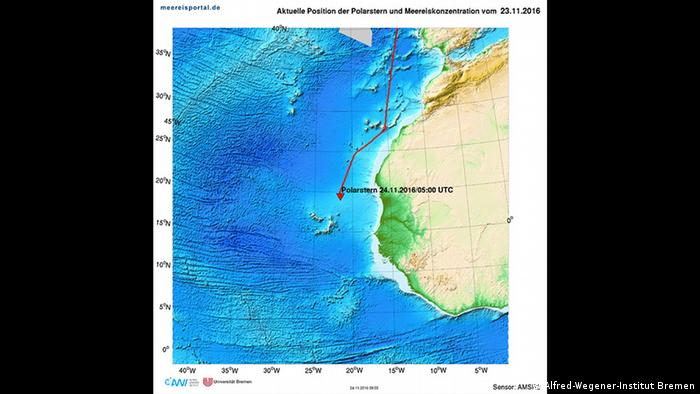 "Nothing short of awesome"

Walaa Thabet, a researcher from Egypt, explains how exciting it is to be on board with such an international team:

"For most of us it is the first time we have participated in an international program that surveys across the equator, and the experience is nothing short of awesome. Having all different backgrounds, we are literally now sitting in the same boat," she said. 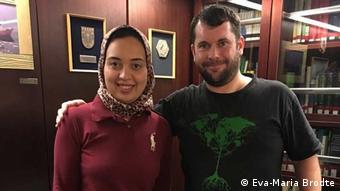 "As an oceanographer in Egypt it is not easy to find a well-equipped research vessel with the latest technologies, so it was a great opportunity for me," Thabet added.

Scientific experiments are underway, giving students the chance to put the theory into practice. They are using a CTD (an oceanography instrument used to determine the conductivity, temperature and depth of the ocean) as well as a water sampler made up of 24 bottles that can be automatically closed from the winch room at a chosen depth. 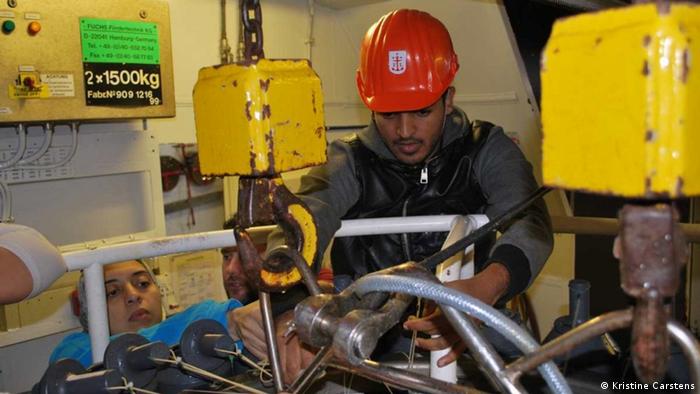 Preparing for the water sampling

"The CTD cast took about two hours before it came on deck again," Walaa Thabet and Eoghan Daly explained. "We could feel the apprehension in the winch room, communicating clearly with the crew and chief scientist, while also deciding on bottle depth and a sampling plan."

With the journey well under way, Prof Karen Wiltshire, the chief scientist on board, talked to DW about life on the ship and what the team of marine scientists hopes to discover.

Ship to shore: the Polarstern

The 25 international students met in Bremerhaven to prepare for their journey. Hugh O'Sullivan and Andrian Gajigan tried to describe what they were feeling as they took a pre-departure tour around the Alfred Wegener Institute:

"It was humbling to see the portraits of so many bearded German legends of ocean science, looking down at us as we examined the curiosities in the display cases around the institute. Our eyes were immediately drawn to the scale model of the RV Polarstern. As we ponder the adventures and experiences to come, our excitement is almost unbearable!"

From Bremerhaven to Cape Town

The Polarstern, a German research ship, has set sail on a month-long journey from Bremerhaven in Germany to Cape Town in South Africa.

On board are an international team of marine scientists, including 25 students who were chosen from among 500 applicants to take part in the research trip.

"Really we have such wonderful experts on board," lead scientist, Professor Karen Wiltshire, told DW. "We're really lucky that we can work with these people, from all over the world." 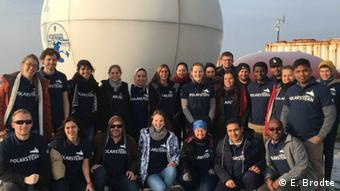 The student participants posed for a group shot before setting sail

The aim of the trip is to find out more about our changing climate by studying ocean samples and comparing results with existing data.

"Each body of water represents a little bit of climate talk," Wiltshire, explains. "If the body of water is warmer or in a different place, it's related to how climate is functioning at that time."

The research trip is a joint venture between the Alfred Wegener Institute, the POGO Center of Excellence and the Irish SMART program. Students will learn the basic techniques of oceanography and contribute to five research projects.

The Polarstern is due to arrive in Cape Town on 12th December 2016, before heading off on its next Antarctic adventure.

DW will be tracking the ship's progress over the next few weeks, talking to the scientists on board and finding out what they have discovered