Which battles are you involved in? European artists provide answers 200 years after Napoleon's defeat at the Battle of Nations in Leipzig. Their experimental communal theater project brings audiences to the "front." 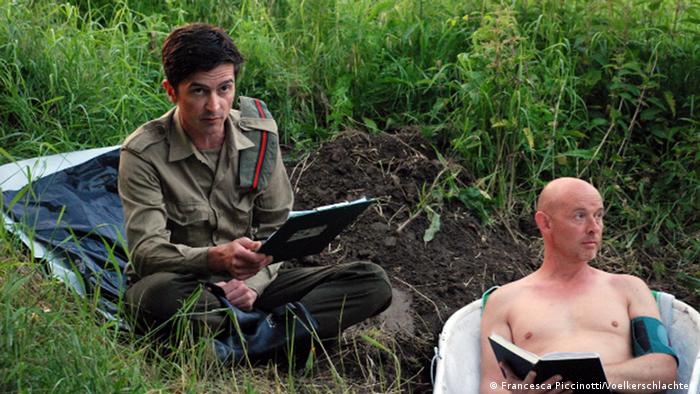 It looks like a quirky military camp for a tiny army in an abandoned field, but it's actually a stage. Here the "fringe ensemble," a theater company from Bonn, and the Schaubühne Lindefels, a Leipzig cultural center, are producing a work in progress that they call "Millennium Front Theater."

The experimental performance is taking place this week at the Jahrtausendfeld (Millennium Field) in Plagwitz, an industrial district that was the site of the Battle of Nations in 1813.

The battle involved half a million people from many European states with armies from Russia, Prussia and Austria uniting to fight against Napoleon's army, which included Italian and Polish troops. It was the first time that Napoleon was defeated in a battle and that event marked the beginning of the end of his empire. 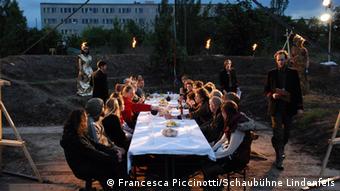 In our modern day, where warfare is equated with technology and unmanned drones are sent to do the dirty work, it's hard to picture the bloody reality of man-to-man combat in 1813. Nevertheless, military conflict is just as prevalent as it has always been, which is why the 200th anniversary of the historic battle inspired the fringe ensemble to consider the "front."

Eight writers from across Europe, from Latvia to the Netherlands to Italy, were invited to write on the spot about the current battles in their societies and cultures.

"During the three weeks of the duration of the camp, we play 12 different shows, four per week,” explained fringe ensemble director Frank Heuel. "Each of them is a premiere, as we work on what the writers who are living here with us have written on the day."

Everyone who is working at the show lives at the camp. Each group of two or three writers stays for one week with the acting ensemble.

They live in tents and eat together at the kitchen camp. "The point is that we are working together by living together, and everyone is out of their private reality,” said Heuel.

That means that the actors and playwrights interact with each other around the clock. "It is the first time that we are in the same situation as the writers. They have the same experiences that we have, so everything gets more intense,” said actor Andreas Meidinger.

The writers produce texts in their own language in the morning, the crew translates and works on them in the afternoon and then perform them in the evening. "It's a collaboration on different levels, on the methods, on the content, on the translation,” said Heuel. 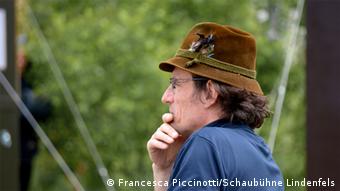 Each performance is a premiere, says Heuel

All genres and techniques are allowed: farce, tragedy, comedy, songs, monologues or readings. New locations are created on the spot every day, as the camp is both artistic workshop and stage.

While open-air theater is often associated with spectacular performances like fireworks and acrobatics, the Millennium Front Theater focuses on text. The writers have to answer the questions at hand in their own way: Where is the front today? Which battle are we fighting?

Goran Ferčec from Croatia developed three monologues during his residency at the camp. "The new contemporary front is hunger. There are so many unemployed people in Croatia that are going on hunger strike to protest,” he said. One of his monologues reads: "This is the Passion of the workers that are losing their jobs, this is the millennium front."

Dutch writer Andreas Vonder believes that "there is only one real front, and this is the financial front." He wrote a poetic diary about life at the camp. In his diary, small life events mix with news from the outside. "In Istanbul, what started as a pacifist protest for a couple of trees became a front,” he said in one of his pieces. He read his own texts in Dutch to the public, while Andreas Meidinger played his German double.

French author Marie Nimier adhered more closely to the "war” theme. She wrote "On a perdu” (We lost), a song inspired by Napoleon defeat - territory on which few French dare to tread.

"It was interesting to talk about losers in front of a German audience because for us we are the winners. Most of the time, people in France don't know much about this Napoleon defeat and they don't want to know,” she said.

On the literary front 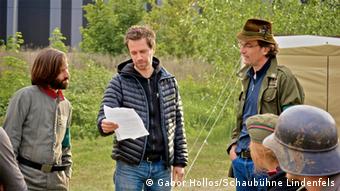 The communal lifestyle at the camp allowed the writers to share their views about their own personal "front": European literature.

But coming from a larger country and larger language group doesn't always mean things are trouble-free for Nimier. "It is funny that across Europe writers are highly respected and yet it is very hard to make a living out of writing. There is a tension between the image and the reality of our lives,” she commented.

The ability to adapt quickly is inherent to the artist's profession, but is also expected of the visitors to the Millennium Front Theater. They could be shouted at by a "general," offered a snack while listening to a lecture about hunger strikes, or be ordered to march.

The show feels both raw and well prepared, and its ever-changing character holds a bit of wisdom to take home. As Nimier put it, "If you find something you like, don't stick to it, try something else." After all, Napoleon did that too.

September 7 marked the 200th anniversary of the Battle of Borodino. This military showdown marked the beginning of the end for Napoleon’s invasion of Russia. It’s one of the most important events in Russian history. (07.09.2012)

This year marks the 200th anniversary of the War of 1812, which helped set the border between Canada and the US and caused a huge blow to the cause of Native Americans. Along the border, re-enactors keep history alive. (11.07.2012)

Getting trained as a musician in Leipzig has long been tuition-free for everyone. But now the conservatory has announced steep tuition for non-EU students. Students are protesting in the way they know best: with music. (27.05.2013)

She rescued the Schauspiel Köln theater from provincial mediocrity and is now the first woman to head the renowned Schauspielhaus in Hamburg. Director Karin Beier doesn't shy away from politics and new challenges. (14.05.2013)