Getting trained as a musician in Leipzig has long been tuition-free for everyone. But now the conservatory has announced steep tuition for non-EU students. Students are protesting in the way they know best: with music. 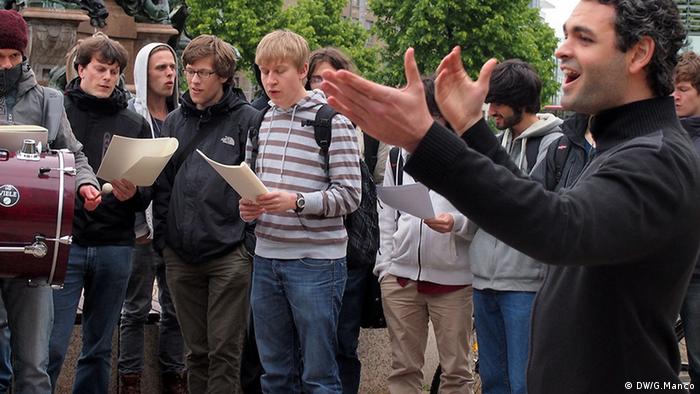 Walking through Leipzig's city center on a cold May afternoon, I could hear young people of all nationalities chanting an impeccable version of "Carmina Burana" in front of the conservatory's main building. The artistic flash mob was the last of a series of free concerts and theatrical demonstrations that students organized all over the city in response to the news that a new tuition for non-European students was to be introduced at Leipzig's prestigious music school.

The Mendelssohn-Bartholdy Conservatory of Music and Theater is one of the first universities in Germany to introduce tuition fees for students coming from outside the European Union. Previously, university education was free for everyone - regardless of where students came from - in most of Germany's 16 states, including Saxony, where Leipzig is located.

But recently, a new regional law was passed allowing higher education institutions to impose tuition fees on non-EU students. Starting in September, non-EU students will have to pay 1,800 euros (about $2,300) per semester in tuition to study music or theater at Leipzig's conservatory. Until now, both EU and non-EU students have only been subjected to an administrative fee of 110 euros per semester.

"We want to show the rich cultural environment that the school has thanks to its foreign students. We want to show how, thanks to the low fees, I could come here and a friend of mine from Iran could come as well and we could play together," said Ronen Shifron, a 25-year-old music student from Israel who was participating in the demonstration. "This would not be possible, not in Israel and not in Iran, because of the political situation, but also it would not be possible for me or him in the United States or anywhere else because it costs so much."

When it comes to classical music, Leipzig has a strong reputation that dates back many centuries. J.S. Bach, Richard Wagner and Felix Mendelssohn-Bartholdy are some of the most famous names that link Leipzig with music. 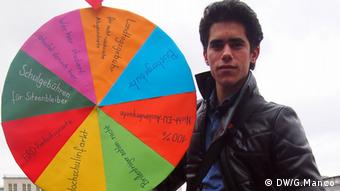 The fate of the international students is a matter of luck, says Egyptian piano student Seif el din Sherif

The conservatory is internationally recognized and has long attracted students from all over the world. But studying music in Leipzig offers another advantage: The cost of living in Saxony is very low, compared to other cities with top conservatories, like Paris, London or even Berlin.

For Shifron, who is doing a Masters in viola, that was one of two decisive factors. "The teacher with whom I study now happens to be an amazing teacher who I met in a summer course and she is the reason why I came to Leipzig," he said. "I wanted to study with her and it was amazing that I could come here and somehow survive financially. If she taught somewhere else, I'd have to give up studying with her."

Out of 900 students at the conservatory, only 120 come from outside the European Union. German and European students alike have shown their solidarity with the foreign students by taking part in the protest performances.

Hannah Baumann, 22, from Munich, is doing her Bachelors in dramaturgy and is very realistic about the situation. "In our school we don't study things that will lead us to stable jobs in the future. So even if you take a loan, you don't know how and when you will be able to pay it back," she said.

Baumann says that if she were a foreign student she would probably leave the school: "Rationally I would know why they took this decision, but emotionally I think you feel like you are not welcome anymore."

Solution to the crisis

The school's rector, flautist Robert Ehrlich, defends the tuition fee by saying it is the only possible way for the conservatory to preserve the quality of its teaching. "We have a financial crisis. We are paying half of our teachers so little money that we are starting to lose some of our best teachers and the teachers that are remaining loyal to us are saying that they cannot afford to work for us anymore."

Ehrlich says he understands the student protests, but nevertheless believes they are barking up the wrong tree.

"Certainly the form of protest is a tribute to the conservatory, it shows that we are doing a good job and training our students to be creative in everything that they do," commented Ehrlich. "But ultimately the protests need to be directed at a different address. I think that it is a political responsibility to decide how higher education is to be funded: The students don't have to convince me."

According to the rector, a scholarship system is being put in place but some of the students are double about how effective it will be. 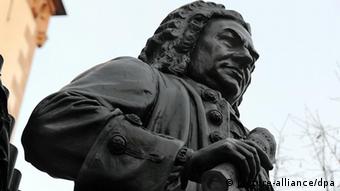 Baroque composer J.S. Bach spent many years as cantor at the St. Thomas Church in Leipzig

Xiao Cheng Wang, 22, a clarinet student from China, says that the tuition situation is affecting his studies. "It is a big shock for those who are already enrolled here. I have to consider whether I can live off my money in Germany. With these troubles I cannot concentrate on my studies and I cannot do well in my daily practice," he said.

Shifron is in a similar situation: "I would need an extra 300 euros a month. I guess I could go be a waiter but I wouldn't be able to concentrate very well on my studies. Music studies are like sports - you can't go work eight hours and then practice another six."

Though the student protests haven't reversed the tuition decision completely, they did achieve one small compromise. Non-EU students that are already enrolled will only have to start paying the fee in 2014 rather than this fall. Nevertheless, the protestors have no intention of stopping until the fee is cancelled altogether.

While the music students have tried a wide variety of approaches to get their point across, from demonstrating in front of the regional parliament in Dresden to taking legal action, they prefer to express themselves through art. And they don't see themselves as protesting against the school, but as fighting against losing it.

Aged 19, Jaeyun Choi is one of the youngest students involved in the protest. The Korean violinist demonstrated his conducting talent at the last free concert.

"I directed 'Arirang,' it's a Korean folk song. I organized the choir with as many students as possible to show that musicians are all the same," said Choi. "The song tells the story of two people that don't want to lose each other and this is what I wanted to say about this conservatory: We don't want to lose anything about this school."

Giving the gifted a chance to flourish

They are smart and ambitious, but often bored. Gifted students have a hard time in Germany. The Maximilianeum in Munich, where over-achievers live and study together, is an exception. (03.01.2013)

More Chinese students study abroad than any other nationality. Increasingly, they are choosing universities in Germany, where science and engineering professionals are in high demand. (01.08.2012)

In Richard Wagner's bicentenary, great-granddaughter Nike Wagner has been chosen to head the Beethovenfest. Critics say her heart is in Bayreuth, but Bonn is prepared to get involved with the complicated Wagner clan. (24.05.2013)