The Next Targets? Italy, Denmark Up Security | Europe | News and current affairs from around the continent | DW | 29.07.2005

The Next Targets? Italy, Denmark Up Security

Following the London bombings, Italy and Denmark were named as possible targets on a Web site popular with Islamic militants. Both countries are now stepping up measures to protect against a similar attack. 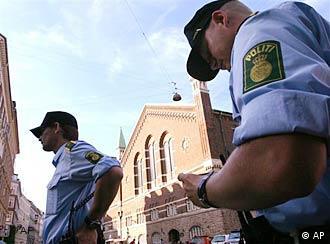 Danish police are out to calm a nervous public

On every platform of every station in Copenhagen's ultra modern metro system, police officers scrutinize passengers. Their presence on the city's transport system is designed to deter potential bombers and calm public fears.

Security services all over Denmark are working overtime to thwart those who would punish the country's alliance with US President George W. Bush, as well as what many immigrants regard as Danish Prime Minister Anders Fogh Rasmussen's hostile right-wing government.

Further south, Italian Interior Minister Giuseppe Pisanu has presented a 19-point anti-terror plan to the Italian senate. The plan foresees the speedier deportation of foreign nationals suspected of terrorism, closer surveillance of telephone and Internet traffic, wider powers for the police when carrying out raids, and compulsory submission of hair and saliva samples for DNA testing.

Clearly, neither country wants to leave anything to chance following the release of a document in the aftermath of the London bombings that specifically named the two US allies as potential terrorist targets.

"We continue to warn the governments of Denmark and Italy and all crusader governments that they will receive the same punishment if they do not withdraw their troops from Iraq and Afghanistan," read the statement, published on a web site popular with Islamic militants, by a group calling itself the "Secret Organization of al Qaeda in Europe." It is the same group that claimed responsibility for the deadly bombings earlier this month on London's transport network. 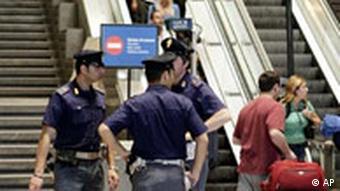 Police officers patrol at the entrance of the central railway station in Milan, Italy, Wednesday July 13, 2005.

"The (Italian) government is trying to strengthen the intelligence, to control some specific Muslim communities, to control the kind of teaching that is produced by some Muslim schools, and to be more attentive to signals that might come from other secret services in Europe and elsewhere," said Italian terrorism analyst Gianfranco Pasquino.

Most people in Italy fear that the country is at risk from an imminent terrorist attack. One survey completed this week said 85 percent of people thought an attack was likely in the coming weeks or months. People are modifying their habits, their movements and their holiday plans. But Pasquino says most Italians are realistic about the level of protection they can expect from their government.

Denmark's police commander, Per Larsen, says that while the threat of terror is present, he is concerned with keeping public hysteria at minimum.

"We have to look at what's happened in other countries and be very aware that the risk is always there. On the other hand, we still think Denmark is a very peaceful country," Larsen said. "It's important not to make the whole situation too hysterical. I don't think the danger is that big, but we can't guarantee that somewhere in the city, there isn't a crazy person or group who are convinced they're doing the right thing."

Denmark has been immune from international terrorism for the past 20 years, but according to immigration consultant Mehmet Yuksekkaya, the country does have reason to worry.

"I am certain that al Qaeda is operating in Denmark," Yuksekkaya, who has conducted a study of every mosque in greater Copenhagen, said. "And I'm convinced that their friends and relatives know what's going on, but they're turning a blind eye." 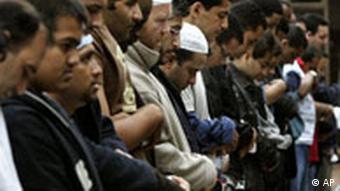 Such sentiments offend moderate Danish muslims such as Zahid Butt, who runs a Web site for Pakistanis in Denmark. He regards Yuksekkaya as a scare mongerer.

"I can't recognize that picture at all," Butt said. "If there is a problem within the Muslim community, then most of the community will react, because the problem would mean that they and their families are also at risk. It there is a threat in Denmark, then I too am threatened."

Italy appears to be taking a warning from the group which claimed responsibility for the London bomb attacks very seriously. While there is no specific threat, Italy has swung into action to prevent a possible atrocity. (July 15, 2005)

Heart of Europe Vulnerable to Terrorism

Brussels, the capital of Europe, would be vulnerable to a terror attack on its public transport system and would be ill-prepared to deal with an incident on the scale of the London bombings, officials said on Tuesday. (July 27, 2005)

While 51 percent of Germans express concern at the prospect of their country becoming a target for terrorists, politicians are bickering over what action to take to secure the country from attack. (July 13, 2005)