Only two years after the end of World War II, the French couturier presented a collection that symbolized not only a departure from previous styles, but the beginning of a new society.

"It's quite a revolution, dear Christian! Your dresses have such a new look!" Carmel Snow, the former editor-in-chief of the American edition of "Harper's Bazaar," said these words after Dior's debut fashion show in Paris, on February 12, 1947. And the legend was born.

After the war period of utilitarian attires and vestiary austerity, perhaps nothing felt newer than Dior's vision. His first collection rejected the modern course of dressing established in the 1920s and 30s, which intended to liberate women from the restrictive sculptural volumes and corsets of early 20th-century fashion. Instead, he presented an image of radical femininity, achieved by tight-fitting jackets with padded hips, petite waists, and A-line skirts.

Dior became the new star of the Parisian haute couture scene and almost instantly transformed the wardrobe of the contemporary woman. The "New Look," the name by which Dior's style eventually went down in history, appealed strongly to the nostalgic mood of the post-war society.

Dior didn't want to create everyday clothes for the pragmatic woman of the fast-moving century but rather sell a dream of the good old days, when women could afford to be extravagant and deliberately glamorous. The New Look was a rediscovery of prosperity, and women across generations and social classes adopted it happily.

Feminists protested against it

Not everybody was thrilled by the hip padding, draperies, pleats, embellishments, and other exaggerations proposed by Dior, however. Those were, in fact, regressive ideas, and many criticized Dior righteously for taking away women's newly attained independence by lacing them up in corsets and making them wear long skirts again.

"We abhor dresses to the floor! Women, join the fight for freedom in the manner of dress!" said the banners of the Little-Below-the-Knee Club who staged a protest against the New Look in Chicago.

American fashion designers, who embraced modest, sleek silhouettes and whose business was blossoming during the war, were also similarly appalled by Dior's design. Coco Chanel, the star of the pre-war fashion, even mockingly remarked that "Dior doesn't dress women, he upholsters them!" 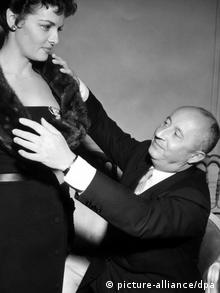 Christian Dior placing a dress on US actress Jane Russell, in 1954

"What was heralded as a new style was merely the genuine, natural expression of the kind of fashion I wanted to see. It just so happened that my personal inclinations coincided with the general mood for the times and thus became the fashion watchword. It was as if Europe had tired of dropping bombs and now wanted to let off a few fireworks," wrote once Dior.

Sociologists and historians who've analyzed the first post-World War II years agree. The long hems and petticoats made of yards of fabric were a sign of the end of the governmental restrictions on materials, while the comeback of corsets signalized the return of women from offices, hospitals, and munitions factories back to homes.

In the 30s, women of the middle and upper class would basically wear the same attires due to the Great Depression. In contrast, after World War II, Dior's exclusive, lavish costumes offered a symbol of the new, divided society.

Christian Dior's untimely death in 1957 heralded a different era, one that was obsessed with youth rebellion rather than bourgeois hauteur. By the early 60s, the New Look almost vanished from the collection of the house of Dior and his epigones. Its revival came in the 90s, however, when a wave of young fashion designers decided to deconstruct fashion history and appropriate it for their times.

Nowadays, the New Look once again reigns on the runway: Thom Browne, Miuccia Prada, or J. W. Anderson are among the many names who have recently updated Dior's signature style for the early 21st century.

In 1947 Christian Dior presented his first haute couture show in Paris and revolutionized the female silhouette with his "New Look". The designer label is still one of the biggest names in fashion today. (25.01.2017)

The House of Dior has named Maria Grazia Chiuri as its new creative director. The French fashion house hopes to replicate the sales success engineered by Chiuri for Italian label Valentino. (08.07.2016)

French fashion house Christian Dior epitomizes Parisian chic, innovation and elegance. For decades, the label has shaped the global fashion industry, both with its classic models and more spectacular designs. (28.01.2016)

A cycling vacation ― it's inexpensive, environmentally friendly and particularly popular in times of the coronavirus. Here are the 10 most popular routes that lead through Germany.