The Nazis' take on 'Degenerate Music'

An exhibition opened May 24, 1938, in Düsseldorf titled 'Degenerate Music' that aimed to galvanize public hatred of music deemed 'un-German' by the Nazis. A current exhibition now reviews what the original showcased. 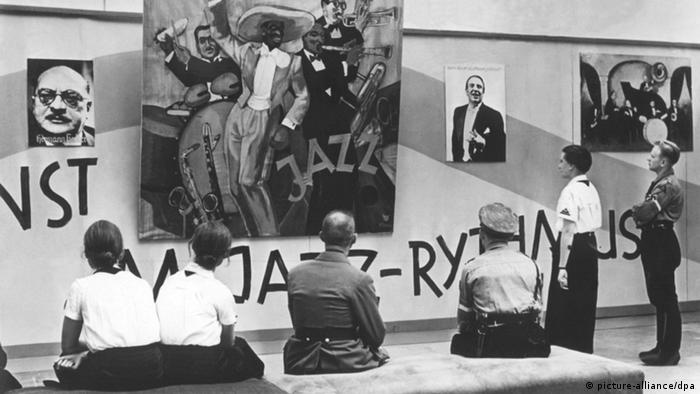 The National Socialists' racial fanaticism left nothing untouched, including the realm of music, which they hoped to see ridded of all "un-German," "un-Aryan" influences. To drive the point home, an exhibition titled "Entartete Musik" (Degenerate Music) opened in Düsseldorf on May 24, 1938, as part of a week celebrating "national music." Everything that was to have no place in the Nazis' musical culture was presented by way of audio snippets, pictures and accompanying texts.

The vilified genres included Schlager, operetta and atonal music - but especially music by Jewish composers - as well as jazz, dismissed as "nigger music."

The exhibition became a starting point for an unprecedented campaign against musicians and their music. None of the individuals included in the exhibition were allowed to continue their work under the regime. A ban on their work and playing their compositions was the first step, leading ultimately to physical pursuit and deportation. 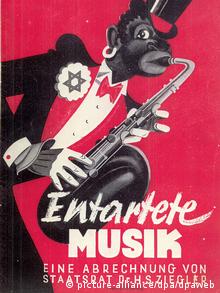 Jonny, as caricatured in an "Entartete Musik" poster

The exhibition was intended as a deterrent, at least according to the intentions of Hitler admirer Hans Severus Ziegler. The Nazi official and former director of the state theater in Weimar organized the exhibition.

In a speech that opened the show, he said, "What has been collected in this exhibition represents an effigy of wickedness - an effigy of arrogant Jewish impudence and complete spiritual insipidness."

The title page of the exhibition's accompanying brochure made Ziegler's intentions immediately clear to visitors. A perfidious caricature depicted "Jonny," a black jazz musician known at the time as the title figure in Ernst Krenek's opera "Jonny spielt auf" (Jonny Strikes Up) as well as through Friedrich Holaender's chanson "Jonny, wenn du Geburtstag hast" (When It's Your Birthday, Jonny), which Marlene Dietrich made famous in a pointedly erotic interpretation. On the brochure, Jonny had been mutated into a monkey, bearing the Star of David rather than a carnation in his buttonhole. It would become a prominent figure within Nazi propaganda and the symbol of "degenerate" music. 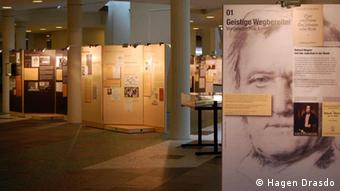 A view of the exhibition that reviews the original "Entartete Musik"

Jonny in the spotlight

As early as 1930, Ziegler had fumed against jazz, saying the genre was helping black culture to "victory." Regarding Krenek's jazz opera "Jonny spielt auf," debuted in 1927 in Leipzig to great success, Ziegler wrote in the exhibition brochure, "A people that nears hysteria in its praise for 'Jonny,' who has already shown off much too long for that people, has grown spiritually and mentally ill, and is internally confused and unclean."

There were also displays offering polemics against Arnold Schönberg and his followers, whose atonal music was said to have "mocked classical masterpieces and flouted hallowed traditions." Paul Hindemith was also condemned as the "theoretician of atonality." 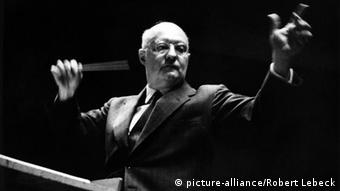 Paul Hindemith was among those who faced condemnation from the Nazis

The exhibition in Düsseldorf ran through June 14, 1938, and then moved in Weimar, Munich and Vienna. The outbreak of World War II in 1939 prevented the addition of further stops.

While the Nazi exhibition "Entartete Kunst" (Degenerate Art) has been reconstructed and shown numerous times since 1945, "Entartete Musik" was long forgotten. It was not until 50 years later, in 1988, that the musicologist Albrecht Dümling created a commentated reconstruction. Since then, the exhibition has traveled to more than 40 cities in countries including Israel, the Netherlands, Switzerland and, under the title "Banned by the Nazis: Entartete Musik," in the United States.

New scholarship on the Nazis' politicization of music, particularly with respect to jazz and operetta, allowed Dümling to expand the reconstruction in 2007. Under the title "Das verdächtige Saxophon. 'Entartete Musik' im NS-Staat" (The Suspicious Saxophone. 'Degenerate Music' under the National Socialists), there are now around 80 pieces in the exhibition and many original sound clips. It's a nightmarish documentation that shows not just how the Nazis exploited music and how they defamed musicians, but also makes an appeal to visitors to be vigilant when words like "degenerate" are used to dismiss art.

The suspect is accused of belonging to a far-right criminal organization that sought to spread antisemitic propaganda by selling books. His group allegedly had storerooms stocked with thousands of texts.