The myths and mysteries of Ancient Greece on show in Germany | Culture | Arts, music and lifestyle reporting from Germany | DW | 29.11.2018

The Schloss Karlsruhe Museum is hosting the largest exhibition ever held on Mycenaean Greece's cultural history. Titled "Mycenaean Greece: The legendary world of Agamemnon," the show presents over 400 exhibits loaned from Greece, many of which are shown for the first time outside of the country.

"The visitors will be guided through an ancient world and can experience Mycenaean culture from its beginnings to its downfall," co-curator Bernhard Steinmann told DW.

The museum also aims to support Greece's efforts to fight against the looting of its antiquities: All exhibits come from Greek museums, as well as heritage agencies and secured excavation sites.

Homer, the guide to archaeological treasures

Paris, the son of the legendary king of Troy, Priam, kidnapped the beautiful Helen, thereby attracting the wrath of the king of Mycenae, Agamemnon. The events depicted in Homer's Illiad led to the Trojan War, which took place from circa 1260 to 1180 BC.
Heinrich Schliemann,  a German pioneer in the field of archaeology and the study of the Aegean civilization in the Bronze Age, was convinced that Homer's epic reflected historical events. 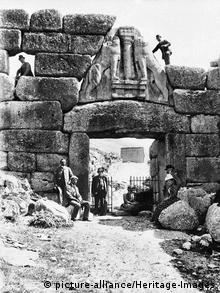 He was 52 when he traveled in 1874 to the citadel of Mycenae in Greece, which was according to mythology Agamemnon's center of power. Two years later, the archaeologist made a sensational find: He discovered a grave with three skeletons and numerous burial treasures, including two ornate gold masks. Schliemann believed at the time that it was the tomb of the legendary Agamemnon.

However, scientists later realized that the tomb could not have been his, determining that the masks predated the period of the Trojan War by some 400 years.

A flourishing culture — and an enigmatic downfall

Whether the Greek king actually existed still hasn't been determined with certainty. There is however archaeological evidence that Troy, the city described by Homer, did exist. From there, Europe's first advanced civilization found its way onto the European continent.

Impressive Cycleopan masonry fortifications were also found in Pylos, Athens, Tiryns and Thebes. The large palaces served as administrative centers with a sophisticated bureaucracy to monitor tax revenues and control the palaces' economy.

From the 15th to the 12th century BC, Mycenaeans dominated the Peloponnese, building magnificent palaces and trading with other civilizations. However, the empire mysteriously disappeared after 400 years. Scholars still do not now why the civilization was in decline by 1200 BC.

Remaining from the Mycenean period are rich tombs, jewelry and numerous bronze weapons.

Their fine ceramics also demonstrate their high level of craftsmanship: "The Mycenaeans mastered the abstraction of Minoan Cretan works and their motifs were used emblematically again and again," says Steinmann. Some of these artistic tendencies can be found in Art Deco or Art Nouveau.

Along with Schliemann's world-famous gold mask, the exhibition also includes other highlights. An ancient "crown" found in a tomb in Routsi, which was unknown to researchers until recently, will be exhibited for the first time. Also on show are artifacts from the Griffin Warrior Tomb, discovered near Pylos in May 2015 — one of the most important archaeological finds in Greece of the last 65 years.