The myth of Hitler′s role in building the autobahn | Germany | News and in-depth reporting from Berlin and beyond | DW | 04.08.2012

The myth of Hitler's role in building the autobahn

Many people still believe that the Nazis invented the famous German autobahn, and that the construction work helped eradicate mass unemployment in Germany. But this is a historical fiction. 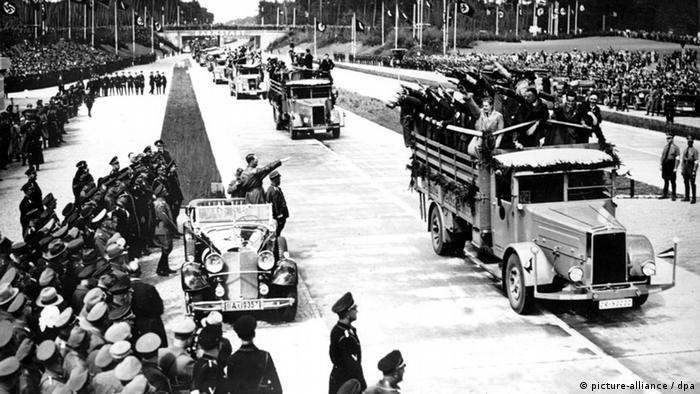 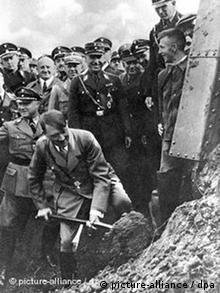 Adolf Hitler takes a spade and sticks it firmly into a heap of sand. One of the soldiers standing around him photographs the Führer, documenting the start of work on another stretch of the famous German autobahn. The image, typical of its time, was circulated nationwide, especially in the regions where little stretches of the "Reichsautobahn" were being built.

The sole aim of all this carefully manufactured propaganda was to make sure that citizens throughout the Reich knew that the building work was going on. Whenever construction started on a new section the event was always meticulously documented and publicized, and big inaugural celebrations marked the opening of every stretch of road.

Hitler makes the autobahn his own

This was quite a turnaround. Only a few years earlier, many members of the National Socialist German Workers' Party (NSDAP) - the Nazis - collaborated with the German Communist Party in sabotaging the construction of ‘car-only roads', as these concrete runways were initially called. The Nazis' argument was that the roads would "only benefit rich aristocrats and Jewish big capitalists and their interests." The Nazis stayed well clear of the political negotiations on financing the motorways. It was only when Adolf Hitler came to power in 1933 that the Nazis realized they could use the autobahn for their own ends. 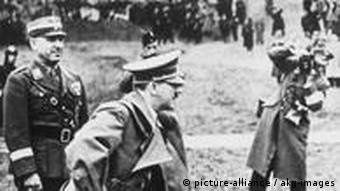 The Führer makes a show of getting involved in construction

Until 1929, the economic crisis and the lack of capital meant that it was impossible to build motorways in Germany. The country was struggling with mass unemployment, hyper-inflation and the payment of reparations for the First World War. It was the mayor of Cologne, Konrad Adenauer, who managed to finance and construct the first crossroads-free motorway in 1932 - now the A555 between Cologne and Bonn. The road was 20 kilometers long, and the speed limit was 120 kilometers per hour, though at the time most cars could only manage 60. The Cologne region was said to have the highest volume of traffic in the country. Shortly afterwards, however, the Nazis came to power, and the motorway had only been open a few months when it was downgraded to the status of "country road". The Nazis decided they wanted to take the credit for building the first autobahn.

Yet as early as 1909 a group of automobile enthusiasts, consisting of wealthy industrialists and influential citizens, had already formed a pressure group for the building of a road that would enable cars to drive without interruption - unimpeded by dust or mud, or by horse carriages or pedestrians blocking the way. Work began in 1913 on the so-called "Automobile Traffic and Practice Road" on the outskirts of Berlin. The intention was to construct a 17-kilometer stretch, but in the end the city could only afford to build 10 kilometers. Construction was interrupted by the First World War, and after 1921 the road was mainly used for testing fast sports cars and for motor sports races. 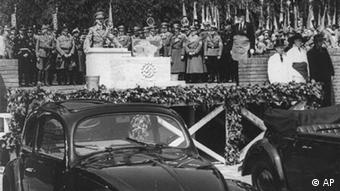 A car for the people - Hitler introduces the 'Volkswagen'

An association was founded in 1926 to push for a transnational road linking Hamburg with Basel in Switzerland via Frankfurt am Main. The Nazis initially rejected the so-called "HaFraBa" initiative. However, after Hitler came to power they appropriated elements of the plan, and the name of the association was changed to the "Association for the Preparation of Reichsautobahns."

Historians now say that Adolf Hitler simply jumped on the bandwagon of increasing mobility that was already gathering momentum across the world. He certainly recognized the potential for securing his own power and seducing an entire nation with what looked at first like a crazy enterprise. At the time, it seemed clear that very few Germans would be able to afford their own car in order to drive on the new motorways. So Nazi propaganda promised the people full mobility. The idea was to enable everybody to travel - not just the rich. This was how the idea of the Volkswagen - the "people's car" - was born. Hitler also made the German national rail company introduce omnibus transport on the first sections of the new autobahns. 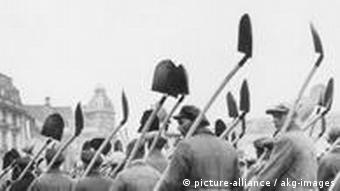 Unemployed people were sent to build autobahns, but this didn't significantly reduce unemployment

The goal was to complete some 1000 kilometers of autobahn every year. These were the Führer's orders. In 1934, he spoke of the "work battle" that lay ahead, and promised that it would reduce the high number of unemployed. Autobahn construction works were supposed to create at least 600,000 jobs. In fact, even when construction was at its height there were never more than 120,000 people at work. The construction itself was marked by sickness, death, hunger and misery. There were strikes, and the strike leaders were sent to concentration camps. The public, of course, were told none of this.

Over the years, an increasing number of Germans found jobs in the booming arms industry. That was what reduced unemployment - not the autobahn construction. During the war years, more and more prisoners and Jewish forced laborers were sent to work in autobahn construction because the regular workers were fighting in the war. By 1941, a mere 3,800 kilometers of autobahn had been completed - half the projected amount. Between 1941 and 1942, construction almost ground to a halt. From 1943 onwards, the autobahns were opened up to cyclists because of the low volume of vehicle traffic..

Yet the Nazis continued to circulate films and photos of workers on autobahn building sites, long after work itself had stopped. This is why the image of colonies of autobahn workersis ingrained in the memories of an entire generation. The Nazis were successful in propagating their image as creators of the German autobahn: it's a myth that often still requires debunking today.

New bike highways to save time and energy

Whoever has been stuck in traffic knows that cars costs time, nerves and money. Politicians now want to set up a bicycle highway in Germany to encourage more commuters to choose their bike over their car. (06.08.2012)

The debate about Germany's looming skills shortage has been raging for more than a week. Now the Free Democratic Party (FDP) says Berlin should make it easier for foreign specialists to obtain a German driver's license. (10.08.2010)

The car has been down a long and occasionally rocky road. What began 125 years ago in Germany as a humble vehicle with a top speed of 18 km/h has evolved into today's high-performance autos tearing down the autobahn. (25.01.2011)