The music of Easter

Where does the word Easter come from, and does it have anything to do with bunnies? DW reviews the history and origins of the spring holiday, complemented with a selection of Easter-themed music. 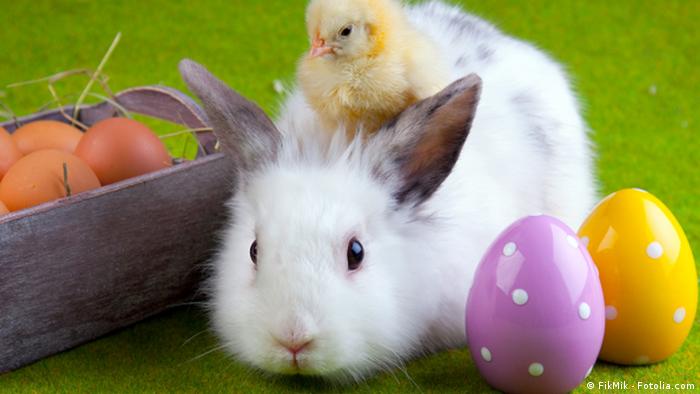 For Christians, Easter marks the resurrection of Jesus Christ, making the holiday one of the most important celebrations of the year. Many are familiar with its traditions, but few are aware that Easter has its roots in a pagan festival honoring the Germanic goddess of spring and fertility.

Eostre was her name. The name means "east" and invokes the sunrise. It's no surprise, then, that Easter derives from the goddess' name. The festival in her honor was always celebrated after the first full moon in spring. People performed a sword dance representing the battle of the sun god against the powers of winter. Winter tended not to come out on top.

But to the church, pagan rituals like these were later a thorn in the eye. At the First Council of Nicaea in the year 325, the church chose the dates of the Germanic spring festival to be the period in which Easter is celebrated - in a sense replacing the pagan rituals with a church holiday.

What sort of music the Germanic people performed to mark Eostre's fest is unknown. But in the Christian world, numerous composers have written works for the Easter holiday, ranging from chorales by Bach to oratorios by Handel, Gregorian chants and sacred music by Mozart - all celebrating the resurrection of the son of God. 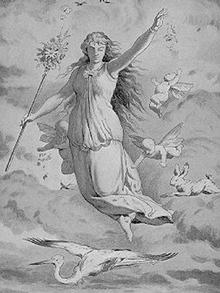 Easter derives from the name of Germanic goddess Eostre

Whether made of chocolate or adorning cupcakes, the Easter bunny is a holiday mainstay. Many children in Germany and beyond will tell you that she's the one who hides eggs around the house and yard on Easter Sunday.

The Easter Bunny's career in egg delivery began in the 19th century. But her existence was already indicated in a 1682 treatise by George Franck von Frankenau, a professor of medicine in Heidelberg. The title, in Latin and German, makes reference to Easter eggs ("De ovis paschalibus - von Oster-Eyern"). Frankenau describes local customs and warns against the effects of eating too many Easter eggs.

Among Christians, Easter symbolizes rebirth, as did the earlier Germanic festival. So it's no surprise that bunnies play a key role in the symbolism of the holiday. After all, they are able to give birth to eight babies per year - a reason that they have long been celebrated as a holy animal.

In music, however, the Easter bunny gets little mention. An exception is Rolf Zuckowski, a musician who also made a name for himself in Germany as an author of children's books. Backed up by a children's choir, he has often sung about the deeds of the long-eared mammal. 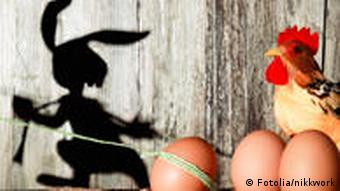 Is it really the Easter bunny who lays Easter eggs?

The egg turns up quite early in cultural history. In the 4th century, Romans and the Germanic peoples placed them next to graves to symbolize the beginning of a new life. In the Middle Ages, serfs gave eggs or a rabbit to their landowners as payment for the use of their fields. Today's tradition of giving Easter eggs as gifts can be traced back to that old form of payment.

But hosting Easter egg hunts is likely to be traced back to city-dwellers. After all, kids from the countryside would have a harder time believing that it was rabbits rather than hens who had laid the eggs. This role fell to the rabbit quite possibly because after a long winter, starving animals would often make their way to villages in search of food. Rabbits, otherwise shy and preferring to avoid humans, started to appear - perhaps to hide an egg or two?

While Easter eggs have only been on the menu for three centuries, the Easter lamb has been part of the festivities for much longer. It likely relates to a Jewish ritual in which the animal was slaughtered and eaten to celebrate Passover. In the Christian Church, it symbolically became the lamb of God.

Martin Luther also made reference to the sacrificial lamb. The instigator of the Protestant Reformation wanted to give congregations a more active role in church services, doing so in part by urging that they include songs written in German rather than Latin. The idea was revolutionary at the time, and it proved successful. Luther wrote the words to a famous Easter motet composed by Johann Walter called "Christ ist erstanden" (Christ Is Risen), which is still sung by many choirs today. 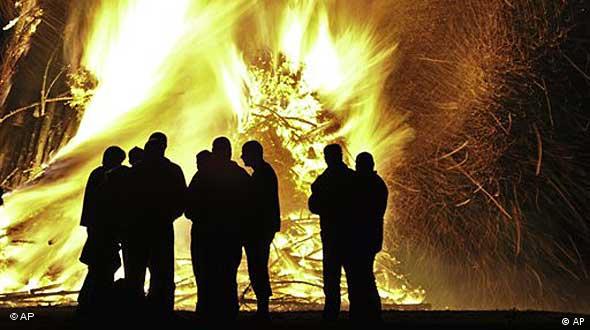 Fires have long burned as part of Easter rituals

Crosses on fire and on horseback

Blazes as part of Easter rituals date all the way back to Eostre's age. The fire symbolizes the sun, which makes all life on Earth possible. Easter traditions including fire continue in parts of Germany, like in the western Weser Uplands region, where burning wheels are rolled into valleys. In other areas, people burn straw figures on a cross as a representation of Jesus' betrayer, Judas.

An old custom among the Sorbs, a small ethnic group in the eastern German state of Brandenburg, is an Easter horseback ride. With a cross carried on horseback around the fields, the seeds are blessed to enhance the fall harvest.

However you spend the coming days, we invite you to listen to this selection of Christian chorales and music from around the world celebrating the spring holiday.

For many in the West, December signifies one thing above all else: Christmas. In this feature, DW journalists present favorite Christmas carols from around the world. (21.12.2012)

50 years ago, almost every village in Germany had its own choir. Increasing consumerism and the rise of the Internet have led to dwindling numbers of hobby singers in past years. But that's changing again. (19.12.2012)