The Money That Could Literally Burn a Hole in Your Pocket | News and current affairs from Germany and around the world | DW | 02.11.2006

The Money That Could Literally Burn a Hole in Your Pocket

The mysterious disintegration of around 1,000 euro bank notes in Germany has prompted an investigation by the Bundesbank and the police. Initial tests show the notes had been contamintated by a powerful acid. 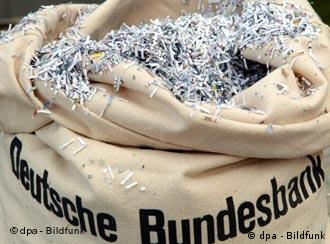 It is not unusual for money to mysteriously go missing soon after coming out of the cash machine. Usually in these cases there are some useless consumer goods which magically take its place. But what is rare is for the money itself to physically disappear after it comes out of the ATM slot.

That's exactly what's been happening to bank customers across Germany in the past few months. More than one thousand bank notes have disintegrated in the hands of customers in 17 different towns since the first case of the disappearing euro notes was reported in Berlin in June.

The notes, worth between five and 100 euros ($6.38-$128), crumbled shortly after being withdrawn from cash machines, leading to an investigation by Germany's Bundesbank and the federal police. Initial tests suggest that the notes had been contaminated with a powerful acid.

The burning question: intentional or mistake?

"We've never seen a case like this," said Bundesbank spokesperson Wolf-Rüdiger Bengs. "At the moment it's still unclear if we're talking about unintentional damage or a conscious manipulation."

The bank ruled out any problems with the printing process.

The mysterious acid attack was reported in German mass-market newspaper Bild which quoted a chemicals expert who said the notes had probably been dusted with a salt which turned into acid on contact with sweat. There is no indication that the acid could burn the skin.

There is also no indication that the acid attack is over. While the Bundesbank and police continue their investigations, the mystery continues to give shopaholic spouses the perfect excuse: "Darling, it just fell apart in my hands."

"I thought it was just laundered money"

A Norwegian student on a field trip to Berlin though he had made the deal of his life -- until he got arrested buying deodorant. (19.10.2006)

A 64-year old retired man from Kiel had been sitting on a small fortune for the past four years without realizing it. To him, it was all just useless paper. So he flushed it down the toilet. (20.04.2006)

Germany is certainly facing serious problems, but it's also important not to forget to laugh once in a while. Read up on a selection on recent articles about funny events in Germany. (02.11.2006)