From Affluent to Effluent: Pensioner Flushes Fortune | News and current affairs from Germany and around the world | DW | 20.04.2006

A 64-year old retired man from Kiel had been sitting on a small fortune for the past four years without realizing it. To him, it was all just useless paper. So he flushed it down the toilet. 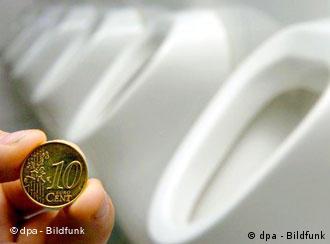 Most people just spend a penny; the pensioner from Kiel spent 30,000 euros

What would you do if you had a small fortune in a defunct currency and you were convinced it was worthless? Would you burn it? Would you throw it in the trash? Or would you take it the bank on the off chance that it could actually still be converted into legal tender?

Well, a German pensioner who had been hoarding 60,000 Deutsche Marks since the currency was replaced by the euro in 2002, didn't consider any of these options and instead decided to flush his considerable wad down the toilet.

The 64-year-old from the northern city of Kiel was apparently oblivious to the fact that the money could still be exchanged. Otherwise it is debatable whether he would have stuffed the equivalent of 30,000 euros ($37,000) down the u-bend.

"He flushed the cash down the loo because he didn't think it was worth anything," said police spokesman Uwe Voigt. 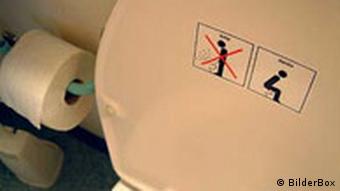 Perhaps a new symbol "Do not flush money" should be added?

After blocking up his toilet and the nearby sewer system with his expensive deposit, the man called sewage workers who extracted about half the sodden currency from the pensioner's plumbing. The remaining notes created a bottleneck in local drains, where most were fished out by the incredulous workers.

How much of the flushed fortune was actually recovered remains a mystery. "There may have been more cash that got away," said Voigt. But the pensioner still managed to save enough of the currency to help improve what the police called his "spartan" living arrangements.

The pensioner dried out the notes that had been saved and deposited them at a local bank. It was not clear whether he had washed them first.

A selection of offbeat and quirky stories from around Germany.

The Days of a Free Pee are Over

When nature calls for students in two schools in the state of Hesse, they'd better have 10 cents handy if they want relief. The school is asking kids to cough up for a pleasant toilet experience. (Dec. 1, 2005)

When American GIs in Iraq get the call of nature, they politely ask to be excused and tiptoe off to the ladies' room. No matter when and where, because their German toilets are like flying carpets: They go everywhere. (March 1, 2006)