The hunt for Nazi war criminals continues | Germany | News and in-depth reporting from Berlin and beyond | DW | 23.07.2013

The Simon Wiesenthal Center has started a poster campaign with the slogan "Late, but not too late." It wants the public's help in finding the last remaining Nazi war criminals. 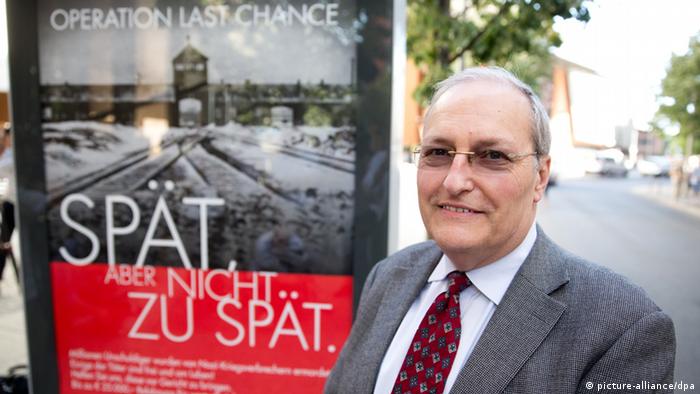 Efraim Zuroff is talking about "60 people, who, day in and day out over a lengthy period of time, were actively involved in mass murder." Now, Zuroff, head of the Simon Wiesenthal Center in Jerusalem, is starting a poster campaign in Berlin, Hamburg and Cologne, to try and bring to justice the last Nazi war criminals living with impunity in Germany. "There's no reason to ignore them, just because their passport says they were born in 1917 or 18, or 20, or 22 or 23 or 24."

The campaign is mainly aimed at former concentration camp guards and members of the notorious SS "Einsatzgruppen" mobile death squads. Zuroff estimates that this amounted to some 6,000 men, of whom 98 percent have probably already died. If half of those who are left are too old or sick to stand trial, that still leaves some 60. Zuroff believes that there are many more people guilty of Nazi crimes than is generally thought, even if no one knows how many exactly.

The idea for the campaign emerged after the conviction of Ivan Demjanjuk two years ago in Munich. The court found that the fact that Demjanjuk had worked as a guard in the Sobibor extermination camp was enough to outweigh the absence of direct evidence of his involvement in specific incidents of criminal activity. Until that ruling, German courts had thrown out cases on the grounds that the accused could not be proved to have actually been directly involved in specific acts of murder or torture. Too much time had passed; too much evidence had been destroyed; too many witnesses had died. 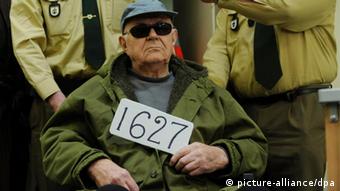 Zuroff hopes that the Munich ruling now opens the possibility of bringing a few more NS henchmen to justice, even though it's become increasingly difficult to provide the evidence needed. The poster campaign is intended to work with the public's support, says Zuroff: "We're saying that millions of innocent people were murdered by Nazi war criminals; some of those Nazi war criminals were never brought to justice and they're still alive: help us bring them to court." And he adds, "Worthwhile information can get a reward of up to 25,000 euros."

The offer of a reward has led to criticism. The German-Israeli historian Michael Wolffsohn calls it a bounty and says the action is tasteless and damaging, since it's more likely to lead to sympathy for the elderly war criminals. The former professor of politics Joachim Perels, whose father was executed by the Nazis and who has been working on issues concerning the Nazi period for years, says the Simon Wiesenthal Center has done much good in hunting down war criminals and in supporting the authorities with its research, but he says there's already a functioning prosecuting authority in Ludwigsburg with committed prosecutors who are currently pursuing cases against 50 former concentration camp guards.

Nazi continuity through the 60s

Perels agrees with the Simon Wiesenthal Center that the German justice system was for many years not interested in Nazi crimes: "Around 160 people were convicted in Germany: that's not many when you think of the extent of the killing of Jews, Sinti and Roma or victims of euthanasia." 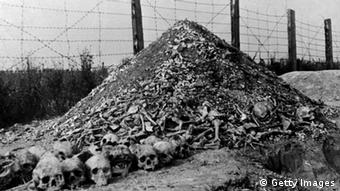 Now, evidence of deployment at a death camp is enough to prove guilt

That was above all because of the continuity in the justice system. "In the 50s and 60s, three quarters of the judges and prosecutors had been active in the Third Reich in People's Courts, Special Courts or in normal courts," says Perels. That meant that, even decades after the war, there were "serious miscarriages of justice."

For example, in the 60s, a man who had led an SS death squad, and had ordered the killing of 15,000 Jews, some of whom he had killed himself, was found by a Munich court to have been merely an accessory, on the grounds that he didn't himself have anything against Jews.

Not much time left

It was the same Munich court which found Demjanjuk guilty based just on proof that he had served in an extermination camp, and Perels sees that as evidence that the justice system has changed substantially in recent years: "It's because of the passing of that generation and a generally different view of the Third Reich." It's not just the young, critical lawyers who have made a difference; it's also German society, in which surveys showed for a long time after the war that more than half the population was opposed to the prosecution of NS crimes.

Both Perels and Zuroff agree that, as a result of the failures of the justice system in the past, there's not much time left, and that it's a matter of respect for the victims that the hunt for the last remaining war criminals should be intensified before it's too late.

Zuroff thinks the poster campaign is the right way to go about it: "We've been trying for the last half a year to get German companies to give us money to finance a campaign to publicize Operation Last Chance," he says. "We turned to 86 different foundations and companies, and only three were willing to help us."