The home of baseball - in Italy

Baseball has mostly struck out in Europe - with the exception of a small city in Italy. There many locals even prefer the game to soccer and will be avidly watching the World Series in New York on Wednesday. 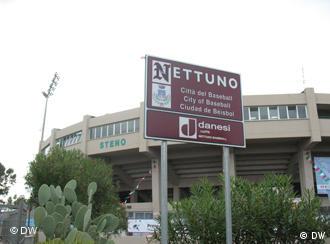 Italians are completely crazy about football. Prime Minister Silvio Berlusconi owns one of the country's finest teams, AC Milan, and one million people tuned in to watch the wedding of a soccer star from Rome. But not far from the eternal city, in the same province, America's pastime rules.

In the seaside city of Nettuno, 70 kilometers (43 miles) south of Rome, kids grow up playing baseball, a tradition that began during World War Two. Nettuno, named for the Roman god of the sea, has played and followed baseball since then and proclaims its passion loud and proud. Signs are placed throughout the city alerting visitors that they are in "Nettuno - the city of baseball." The city founded in the 9th century may offer a scenic port with a Renaissance-era castle and even have the remains of a saint on display in a church. Baseball, however, beats all. 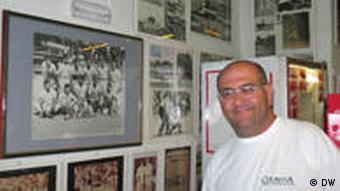 "Baseball in Nettuno, we have it in the blood," Ruggero Bagialemani, a ruddy man whose face lights up when speaking of his pastime, told Deutsche Welle. The 46-year old was one of Italy's finest players, captaining the national team and playing his entire professional career in one town: Nettuno.

"They call Nettuno the 'little United States' because in this town only, the first ball (game) is baseball."

Bagialemani grew up playing ball in the streets of this solidly middle-class town, just like many kids of the same era in Kansas City, Missouri, or Ames, Iowa.

"Ask a young guy if he plays baseball. If he says 'no,' he wasn't born in Nettuno," he said with a laugh. 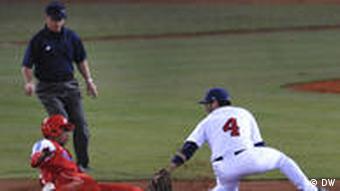 Cuba played the US during the Baseball World Cup in Nettuno

Simone Fontana, 10, arrived in Nettuno's stadium three hours before a recent game during the Baseball World Cup, an international event unlike the World Series in the United States. Fontana is decked out in the uniform of the New York Yankees - from his baseball cap to his cleats. At school, he has to play soccer, but he's not a fan.

"With baseball, you can do more things," the pitcher said. "You can pitch, you can play the outfield. It's a beautiful game." He punctuated his remarks with a classic Italian shrug of the shoulders, meaning "obviously."

A game rich with history

The sport came ashore in 1944. Allied soldiers stormed the beaches of Nettuno and nearby Anzio en route to freeing Rome from its Nazi occupiers. The US troops brought not only arms but baseball mitts and bats. From Nettuno to Rome and beyond, troops played baseball and taught young Italian kids how to field, pitch and bat. But the game disappeared almost as quickly as the candies the soldiers also handed out.

In Nettuno, the game stuck like gum. Baseball united the US troops and Italians while performing a grim task. After the war, service members built a cemetery that became the final resting place for more than 7,800 American soldiers killed on the European front.They worked alongside Italians. During breaks, they'd all head to a nearby field and play baseball.

"I told him that I didn't know how to play baseball," De Carolis explained in the stadium dugout. "But he said, 'Come on! You'll learn."

"They put me in the outfield," he admitted, the spot given to the least seasoned players at first. The American outlined the basics of catch.

"He said, 'After you catch the ball, throw it here.' And so, slowly, slowly, I learned," said De Carolis. He picked up the game and hasn't let it go. Today he's the general manager of Nettuno's professional team. 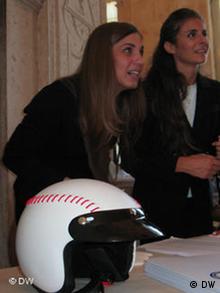 Nettuno's children learn to play baseball at school and compete in local leagues. Three generations of the Camusi family have played the sport. The elder statesman of the Camusi clan, Marco, coaches one of the city's many youth teams. He teaches his players not only to field and bat but the history of baseball in Nettuno.

"Last year, before the finals, I took my team to the American cemetery in the morning," said Camusi. "It was a way to show respect and thanks. To honor the Americans that were here."

He also wanted to remember the Nettuno players that have made this small city into a baseball kingdom. Nettuno has won five European championships, 17 Italian titles and a handful of locals are signed to Major League Baseball organizations in the US.

Between innings, spectators stopped by the concession stand which doubles as a museum to Nettuno baseball. Grainy black and white photos of the first squads in the late 1940s and 1950s share wall space with autographed player pictures of the more recent greats that have swung a bat in Nettuno before hitting the big leagues in the United States.

Bar owner Sandro Baglialemani, who happens to be the brother of the retired star, showed off his menu, like nearly every other restaurant owner in Italy. But this one has a twist.

"We have hamburgers, sandwiches, hot dogs," he said, pointing out the shrink-wrapped American staples that no Italians are buying. "We even have popcorn, just like the American stadiums."

Instead, the fans are ordering espresso and panini. In the stands, young workers aren't dishing out peanuts but bruschette drenched in olive oil. More bottled water than beer is swilled. Baseball has a different flavor in Nettuno yet evokes the same passion.

This amore will be keeping him and most of Nettuno up at night these days. Many locals will tune in at midnight to watch live coverage of the World Series. The people of Nettuno aren't cheering for New York or Philadelphia. They're hollering for their adopted sport of baseball.

Diving with the Duce

The World Championships for swimming, diving and other water sports have transformed Rome into Waterworld. The ancient city's major sports venue is sparkling after an extensive upgrade. (27.07.2009)

The 13th stage of the Tour de France got underway Friday, July 18 in the city of Narbonne with one of cycling's young stars, Riccardo Ricco, sitting in jail after testing positive for a cutting-edge variant of EPO. (18.07.2008)