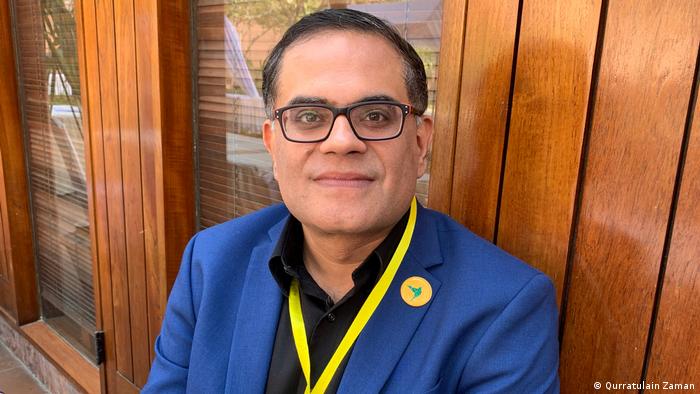 Raza Rumi is a veteran journalist and policy analyst from Pakistan. He is the former editor of The Daily Times newspaper, and also leads Naya Daur, a progressive digital media platform supported by donations from the general public. DW Akademie spoke to him about the threats to free speech and challenges to civic engagement in the Pakistani media ecosystem, and how digital media can help overcome them.

#speakup barometer: What is the state of media freedom and freedom of expression in Pakistan?

To grapple with this question, we have to understand the political economy of the media in Pakistan. The country does have a vibrant media scene, marked by a large number of television channels that sprung up in a short period of time. This rapid growth meant that there was not enough time to train new journalists, which took a toll on accuracy and fairness standards. Incorrect reporting and irresponsible commentary are common. Libel laws are weak and defamation cases can take many, many years. In that way, the media can get away with a lot. But their Achilles heel is a revenue model that depends very heavily on government advertising, opening the door to political pressure.

But that is not all: The drawn-out terrorism problem in Pakistan has brought the old freedom versus security tradeoff to the center. So, it is easy for the harsh laws to be used unfairly against political opponents or people with contrary opinions, and the security apparatus has the power to nudge public opinion against certain groups. There is also pressure from extremist groups. When either side accuses journalists or opinion-makers of blasphemy or treason, they are exposed to security threats as well as the vague but ruthless laws. In that way, media freedoms are curtailed, with serious consequences for unpopular facts and opinions.

What are the challenges faced by journalists and media houses?

There are two major challenges that journalists and news organizations need to grapple with. The first comes from the lack of viable business models. Under-resourced newsrooms – competing to break the news with poorly paid and overworked journalists – do not invest in ensuring accuracy or ethical standards. They do not invest in better training for their journalists or encourage them to innovate. They are also too dependent on the government, and that makes them prone to censorship. Lastly, there is no incentive for inclusion and diversity. Minorities, rural audiences and the underprivileged are not a lucrative market for existing business models.

The second challenge relates to Pakistan’s security problems. As the country faces a drawn-out terrorism problem, journalists are in a double bind. On the one hand, there are direct threats from violent extremist groups. On the other, laws and social norms lean towards an acceptance of censorship and surveillance, and there is a deep fear of ‘the other’ in the society. That leaves very little room for a diversity of opinions.

What is being done to protect freedom of expression and digital rights in the country?

The real initiatives to protect freedom of expression and digital rights will have to come from citizens themselves. If you look at the Internet laws and their implementation, as well as the new regulatory proposals, it is easy to see that we cannot depend entirely on the government to protect us. That is why we see a number of rights groups that are doing great work – from helping women fight harassment so they can participate more freely on the Internet, to doing research that could inform policy, to lobbying for citizens’ rights at home and internationally. And now we are seeing civic innovation projects, digital journalism training, and as in the case of Naya Daur – a citizen-led project I am involved in – progressive online journalism.

You pointed out several challenges for press freedom. How do you think digital media is filling the gaps?

Most of the traditional media’s issues have moved to the digital realm, unfortunately. But the Internet allows game-changing new opportunities for citizens. Thus far, those opportunities are also available to bigoted people who propagate conspiracy theories and unhinged allegations to create clickbait, make money on the Internet, and pander to the worst tendencies in society. As the government plans to extend media regulation laws to the Internet, it is not clear if the new rules will target hate speech and harassment, or just make it harder for journalists to report and fact-check independently.

Ultimately, I am optimistic that citizens and civic groups will come together to innovate, to find sustainable new ways to use technology to do responsible civic journalism, enable civic engagement, and overcome censorship. That is the only way forward.

Do you see the current crackdown as an opportunity for independent media to grow in Pakistan?

It depends. There are two important outcomes. Firstly, it has brought attention to the issue of privacy and surveillance. There are already calls for greater openness and transparency in the country’s Internet laws, a matter I believe was previously not given its due importance in the public debate. Debate around such issues inevitably leads to reform and innovation no matter how long it takes. But a second outcome is that it leads to a fear of surveillance. If people believe Facebook and Twitter will share their data with the government if they fall out of line, that will have a chilling effect.

What are the main challenges facing Pakistan in the next few years?

As Pakistan moves towards political stability, its most important goal is to allow for broad and inclusive political participation, because that is a prerequisite for a thriving democracy. And that is where digital media provides a promising new opportunity.

The first challenge in this regard is that the country needs to radically improve its Internet penetration. In the absence of resources for fixed broadband infrastructure, Pakistan must rely on its high mobile phone penetration to bring fast Internet to all of its citizens. Then, there is a need for new sustainable models of civic participation and journalism in which citizens can participate. Because of the low literacy rate, a key challenge is to invent indigenous ways of participating that are not just text-based. Private research and development in this area is being held back by a lack of e-commerce systems. For a government already struggling with heavy financial regulations, developing an ability to pay and receive money online is a difficult challenge, but it is critical to the future viability of the Internet in Pakistan.

Finally, for a society moving away from its core values of celebrating diversity and inclusion, ensuring that there is participation by women, ethnic and religious minorities, and the rural poor is a serious challenge. Tackling this requires finding new and sustainable models of digital civic participation. We have already increased the power of citizens’ voices thanks to digital spaces. If this trend continues, then the shape of democracy will be determined by online engagement. In short, the future of democracy in Pakistan hinges on digital civic participation.


The #speakup barometer is a DW Akademie project that examines the connection between digital participation, freedom of expression and access to information. Learn more at www.dw.com/barometer

Working towards a free, independent and pluralistic media landscape in Pakistan

Asif Khan is DW Akademie's country representative for Pakistan. In an interview with the #speakup barometer team, he shares his insights on digital participation in his country. (27.03.2019)