On the evening of November 9, East Germany's government spokesman Guenter Schabowski (1929) mistakenly announced that East Germans could travel to the West. It was the beginning of the end of the GDR 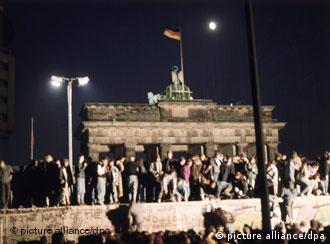 This prime time press conference is now one of the most memorable in the history of the continent. Due to a misunderstanding, Guenter Schabowski incorrectly answered a follow-up question from an Italian journalist, who wanted to know when the GDR's new travel laws - which Schabowski had just announced - would come into effect. "According to my knowledge…immediately, without delay," Schabowski said, in a statement that is now infamous. As the press conference was being broadcast live, and watched in both East and West Germany, his words had enormous significance for the global political situation. 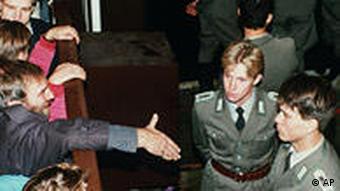 After the Wall was opened, a Berliner offered to shake hands with two border guards

Immediately following the press conference, East Germans began congregating along the inner-German border in Berlin, curious to cross over and visit the western part of the city. The border guards, who hadn't been informed of the new travel rules, managed to hold the crowds at bay for about three hours. But as soon as "western television" had set up their cameras and reported the sensational news, it was clear that on this night, the division of Germany which had begun with the building of the Berlin Wall on August 21, 1961, would come to an end. During the late evening hours on November 9, 1989, the border guards gave up their resistance and opened the city's border crossings to allow unchecked travel back and forth between East and West Berlin.

"We are the people!" 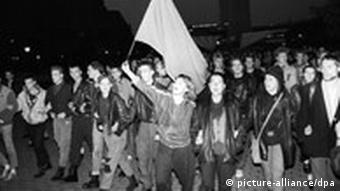 In the preceding months, thousands of East German citizens had begun taking to the streets to demonstrate for political reforms. In particular, the Monday demonstrations held in Leipzig had become notorious. Protesters there adopted the slogan "We are the people!" and chanted "Gorbi! Gorbi!" - calls to Soviet leader Mikhail Gorbachev (1931). Since 1985, he'd been introducing reforms throughout the Soviet Union. People in the GDR wanted the same kind of change. But the unwillingness of Erich Honecker's (1912 - 1994) regime to listen to the people prevented reform. As a result, the East German government brought about its own demise. 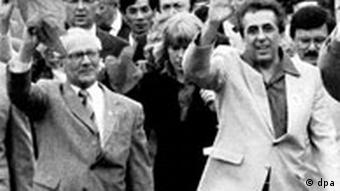 Erich Honecker and Egon Krenz during a GDR peace march in Potsdam, 1983

On October 18, 1989, Honecker was replaced by Egon Krenz (1937) as the head of the GDR's regime. But not even that move could stop the GDR's collapse. On November 4, half a million people joined a demonstration demanding state reform at East Berlin's Alexanderplatz. This powerful gathering made it clear that the new government did not have the trust of the people. Five days later, the Wall was opened, and at the same time, the voices demanding the reunification of the two Germanys grew louder.

A few weeks after the fall of the Berlin Wall and in the midst of calls for German unity, a period of intense shuttle diplomacy broke out in the GDR shortly before Christmas 1989.

In particular, France and Britain were wary of the idea of a large, economically powerful Germany in the center of the European continent. While they didn't outright try to prevent unification, they did require it to be linked to certain political conditions. 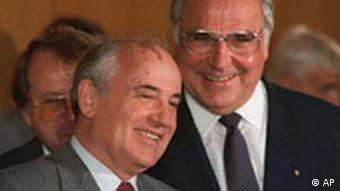 West German Chancellor Helmut Kohl (1930) acknowledged these concerns on December 19, 1989, when he delivered a much-watched speech in front of the ruins of Dresden's Church of Our Lady. In the speech, he said he would respect the will of the East German people - no matter what decision they reached. On that same evening, Kohl also said that the house of a united Germany could only be "built under a European roof." German and European unity were two sides of the same coin. With that, he also delivered a clear rejection of the idea of united but neutral Germany. Kohl's speech was met with thunderous applause from the GDR citizens in attendance.

Despite this, French President Francois Mitterand (1916 - 1996) arrived in East Germany two days later, in order to prevent the GDR from being "annexed" by West Germany. At the beginning of 1990, the reunification process of the two German states was embedded in an international process, in which the interests of the German people were given equal consideration with the interests of the victorious Allied powers of World War II.