The Environmental Hazards of Making Snow | Germany| News and in-depth reporting from Berlin and beyond | DW | 12.01.2005

The Environmental Hazards of Making Snow

During the unseasonably warm winter in Europe, many ski resorts are relying on snow machines to do nature’s work, much to the bane of environmentalists. 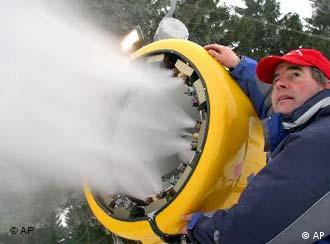 During this season’s unusually warm weather, Alpine ski resorts are doing everything they can to cover their slopes in white powder and attract the tourists. Because there's no telling when the next flurries will come, many ski operators are relying on artificial snow from machines.

These machines are the life-line for Europe’s winter sports resorts. Without them, the ski runs would remain bare and the tourists would not come. Half of the seasonal income would fall out, leaving many families desperate for employment.

Even mountainous Switzerland depends on the machines for a continual snow cover. In St. Moritz, 14 snow makers are constantly busy producing the soft powder. At least half of the resort’s annual profits would melt without the machines.

But environmentalists warn of the dangers associated with relying too heavily on artificial snow makers.

"The original idea, to use snow machines sparingly and only in valleys, has been forgotten," says Gerald Steindlegger of Austria’s World Wide Fund for Nature. "Today entire ski resorts are being covered in artificial snow. This has negative consequences for the environment, and severe ones at that."

The most obvious consequence for the environment is the depleted supply of drinking water.

Snow machines run on the basic principle of turning water into snow. A motorized compressor pumps water into the machine and then propels it in droplets through the air. While in flight, the droplets turn into flakes and fall as soft snow to the ground.

To meet the increased demand for water, ski operators draw from local rivers and mountain streams, further diminishing what the Austrian WWF already regards as a limited supply. Mountain streams, a vital component in the Alpine ecosystem, are often pumped dry during the ski season and only regain their volume for a few months in the summer after the snow melts. 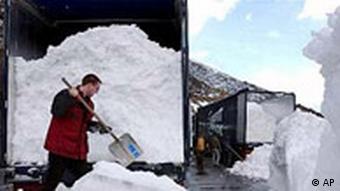 A worker shovels truckloads of imported snow to prepare for the Ski Jump World Championships in Titisee-Neustadt in 2003.

Ski run operators not only use the snow machines to cover slopes during unseasonably warm periods, but also to prolong the ski season beyond the normal winter months.

Because artificial snow is also more compact and heavier than new snow it needs almost twice as long to melt. The extended snow coverage alters the natural climate cycle of the Alps. Although the temperatures are warmer, spring is not permitted to melt the snow away. The growth of new vegetation is therefore hindered.

Another consequence of the snow machines is noise pollution. A high pressure compressor produces 115 decibels of noise. The human ear can tolerate about 85 decibels before beginning to suffer damage.

Studies conducted by the Bavarian Organization for Environmental Protection have shown that animals are seriously effected by the noise of the machines. Because the snow makers are turned on only at night animals’ nocturnal behavior is also altered.

"Winter tourism is an important economic factor in the Alpine regions. But the unchecked use of snow machines has long term effects that destroy the landscape, and will ultimately drive away the tourists," says Steindlegger.

In 2002, the European Union will present findings on a long-term study on the environmental sustainability of snow machines. Until then, ski resorts will continue to rely on the artificial snow to sustain their livelihood.

Armed with surveying equipment, satellite maps and historical postcards, German geologists are retracing diminishing Alpine glaciers. They want to document how climate change has affected their size and shape. (July 18, 2002)

According to a new report by Europe's leading Environment Agency, the continent only has 50 years to adapt to changing weather conditions with three-quarters of Europe's glaciers expected to melt. (Aug. 19, 2004)

A Sunshade for Germany's Highest Peak

What started as an operation for saving ski areas has turned out to be a successful environmental measure to protect glaciers from melting away. Germany's Zugspitze now spends most of the year undercover. (July 14, 2004)