The ego as a work of art: From self-portraits to selfies | Culture| Arts, music and lifestyle reporting from Germany | DW | 12.11.2015

Self-portraits were not invented with the smartphone. An exhibition brings the first masters of branding together with today's millions of selfies. See how they compare artistically.

Rembrandt Harmenszoon van Rijn (1606-1669) had a favorite model: himself. More often than any other artist before him, he painted himself over and over again, creating 80 self-portraits within 40 years. Rembrandt depicted himself as a painter, as a prince, or as the Apostle Paul, with a manuscript of the Gospel in front of him.

The master of branding

Gregor Weber, art historian and Rembrandt expert at the Rijksmuseum in Amsterdam, has dedicated a special room exclusively to Rembrandt's self-portraits in an exhibition on the late work of the artist.

Rembrandt was one of the first masters who branded his own image: "Buyers of his works not only acquired a Rembrandt painting, but one portraying the famous master." His self-portraits represent well the philosophy of the painter: They show not only the beauty and the decay of the body, but also how he mastered the art of depicting them. 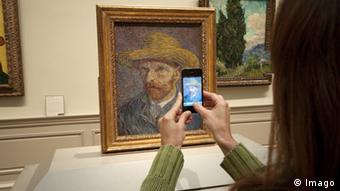 Portrait of a self-portrait

Roughly 250 years later, the Dutch artist Vincent van Gogh developed a different concept of self-portraits than his compatriot Rembrandt. The artist who did not manage to sell a single painting during his lifetime was not working on branding his own image.

Van Gogh was still living with his parents in Nuenen when, one day on his way to school, he bumped into the grave of his brother. The inscription on the grave stone was Vincent van Gogh. His parents had given the same first name to his brother, who had died before he was born. That’s why, in his 35 self-portraits, van Gogh asked the question: Who am I? Unlike Rembrandt, van Gogh's answers to this question were self-destructive and doubtful.

Looking for the ego

In the digital era, selfie-maniacs are obsessed about recording every single moment of their lives. Roughly 25 million Germans have followed this trend in the year 2014. "The former notion of 'I think, therefore I am' has been transformed into 'I photograph, I document, therefore I am'," writes Alain Bieber, curator of the exhibition "Ego Update. The Future of Digital Identity" in the NRW-Forum in Dusseldorf.

In this exhibition, he explores how the crucial question of human existence of "Who are we" has changed under the influence of digital media. "The question of personal identity is a basic question of humanity that has always materialized in social, political and cultural expressions," said Bieber.

The era of selfies

In the exhibition directed by Bieber, visitors can let themselves be photographed in the style of photographic artist Martin Parr. The British Magnum photographer indulges in having himself portrayed in local photo studios during his travels.

The game involving masks has become an important theme in self-portrait art since the beginning of the 20th century. Max Beckmann painted himself as a clown and Ernst Ludwig Kirchner as an alcoholic, as a sick person, or a soldier. James Ensor even painted himself as Jesus, as he felt misunderstood and expelled - just like his colleague Paul Gauguin. With Cindy Sherman, role-playing is a trademark. With her self-portraits as Marilyn Monroe, a lascivious princess or a teenager, the American photo artist scrutinizes the construction of female identity.

Self-image as a fundamental trait of mankind

Whether with the help of a brush or of a smartphone, being preoccupied with oneself is as old as mankind. Pia Müller-Tamm, director and project manager of the exhibition "I am here!" held in the Staatliche Kunsthalle museum in Karlsruhe, believes that "a museum may not exclude the subject in a culturally pessimistic way." She says that "addiction to modern communication is a fundamental trait of man."

The exhibition "I am here!" (October 31, 2015 - January 31, 2016) shows how photographers had to organize complicated mirror set-ups to get a self-portrait in the 19th century. Nowadays selfies are commonplace.

Ai Weiwei, the Chinese dissident who has been living in Germany since a few months, is one of the first artists to have used the smartphone-selfie as an artistic medium. A selfie icon is the picture of August 12, 2009, documenting the moment when the police arrested him. 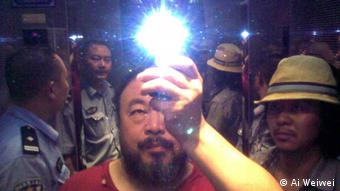 Ai Weiwei photographing himself being arrested by the police in 2009

The composition is perfect: Ai Weiwei in the middle, with the flash turning him into a figure of light. "Involuntarily, one thinks of representations Christ and images of saints: The bearded Ai Weiwei in his torn, blood-red T-shirt appears like a modern martyr." The self-portrait which he took after his surgery in a Munich hospital has also been carefully composed. Ai Weiwei documents crucial moments of his life with his smartphone. Those who follow him on Twitter have the impression of knowing him well, pratically being able to read in his face, how he is feeling. He also uses selfies as a highly efficient means of expressing political messages. 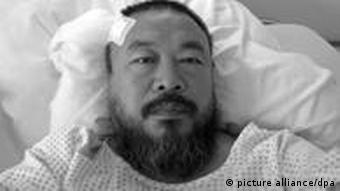 Even if the self-portraits of Rembrandt, Picasso and Beckmann have involved much more work, the selfies overflooding social networks do share some similarities with those of art history: The only thing that can be seen is the torso. The background remains shadowy.

However, there is also a major difference: The significant self-portraits of art history hold time. Selfies, by contrast, only preserve a fleeting moment. Unlike Rembrandt or Van Dyck, most of those smiling people presenting themselves in their selfies seem to be, in the best case, silly - and in the worst case plainly narcissistic.

The exhibition "I am here!" in Karlsruhe invites visitors to be photographed using a photo machine thus becoming part of the exhibition. And who knows, perhaps the quality of historical self-portraits will have some influence on these modern selfie artists.

From the self-portrait to the selfie in art