The drum kit is instrument of the year 2022

People have been drumming on objects since time immemorial. Yet, the drum kit, vital to pop, rock, and jazz music, has only been around for about 100 years.

"What's the quickest way to throw a drummer off his game? Present him with sheet music" — this drummer joke is still one of the harmless ones. Drummers are often disregarded as dumb, loud, completely non-musical, and unable to keep in time. In other words, a fringe group among musicians.

Yet, from Ginger Baker to Dave Grohl, many drummers who have made music history have proven otherwise, by exhibiting brilliance in reading music, writing songs, and serving as bandleaders.

Since 2008, Germany's Schleswig-Holstein Music Council has chosen an instrument of the year, and arranged all kinds of support and events surrounding it. 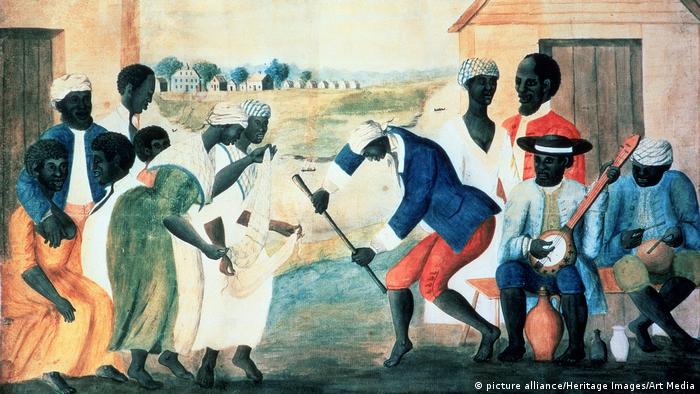 An impression from a Southern plantation in 1800

Thus, following the oboe, organ and harp, the drum set is its chosen instrument for 2022: a loud instrument that doesn't play a big role in classical music, but is essential in the world of pop and rock. What is intriguing is that the the drum set as we know it today is merely 100 years old.

Drums around the world

Drums have been around since time immemorial, to summon the gods and spirits, as healing therapy, as a rhythm instrument in dance, or to provide a beat. Cultures all over the world have traditional drums with different forms and sounds, from the Irish bodhran, the darbuka in North Africa and the West African djembe to Indian tablas, Japanese taiko drums, South American timbas and Caribbean steel drums. Many traditional instruments from world music have influenced Western pop and rock musicians, who have incorporated the sounds of these drums into their music.

March to the beat

Dull drum beats were also used to coordinate rowers on ancient galleys. In the Middle Ages, crusaders brought small Middle Eastern drums to Europe. Soldiers marched to the beat of "snare drums." Wars with the Ottoman Empire in the 16th century brought with them the cymbals and timpani, but it took centuries before all these percussion instruments were assembled into a set. 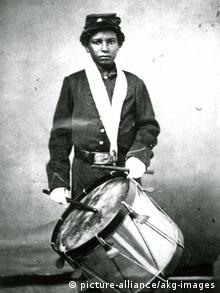 A drummer in the American Civil War

The initial spark probably came from the other side of the Atlantic: a mix of peoples had formed in the south of the USA, with Spanish and French influences — and also African, because slavery prevailed in the southern states. Thus, European and African cultural currents flowed into each other. Especially in the melting pot of New Orleans, numerous music groups emerged.

Putting it all together

After the American Civil War ended in 1865, there was no longer a need for military bands. Slavery was abolished and the former slaves looked for work elsewhere. Military musicians sold their instruments and small and large orchestras quickly formed, mainly with black musicians, who initially played the white military bands' repertoire, as marching bands in the streets, at dances on river boats, in bars and at brothels.

A band back then commonly had several wind instruments, guitar, banjo, and several drummers — one on the bass drum, one on the "snare," which sounds like a marching drum, and one who banged the cymbals. The setup proved to be uneconomical for the bands, so they tried to assemble the various drums and cymbals together, or tried certain techniques to play them all at once.

Several drummers experimented with foot machines; the first such device is said to have been constructed in 1850. But it wasn't until demand increased that the idea really became popular. An American by the name of G.R. Olney (also referred to as J.R. Olney) is considered the inventor of a usable bass drum pedal, a device that left a drummer's hands free to beat other instruments. The Ludwig & Ludwig company — sons of German immigrants — started producing the pedal in the late 19th century.

Early drum kits were similar to what we know today: the bass drum, which is beaten with a foot pedal, in the middle, the snare, a hi-hat (a double cymbal also used with a foot machine) and various other drums, percussion instruments and cymbals. The first complete functional drum set to go into mass production was put on the market in 1918 by the Ludwig Drum Corporation, as the Ludwig family had renamed its firm. 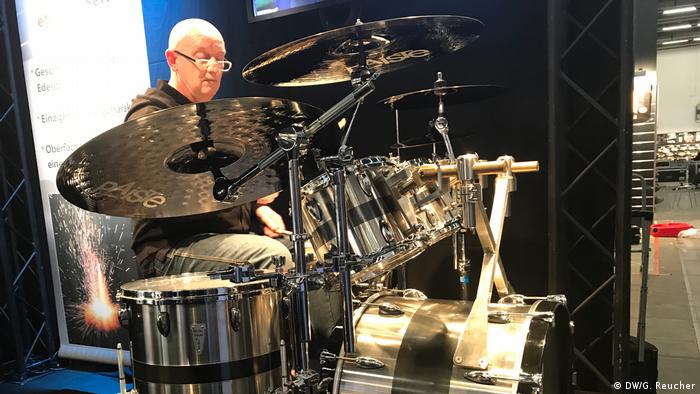 Later, Gretsch (USA), Premier (UK) and Sonor (Germany) also built drum kits, and Asian companies entered the market with Yamaha, Pearl and Tama. They all offer high quality drum kits. Cymbal manufacturers have an ancient Ottoman tradition — even if the most famous companies today are located in the US or Canada, Zildjian and Sabian cymbals can trace their origins to 16th century Constantinople.