The Demise of Germany's Pedestrian Zones

Hamburg has its port, Frankfurt its banks and Cologne its cathedral. But in their core, all German cities look alike. Their true souls lie in their pedestrian zones. But is this German institution facing extinction? 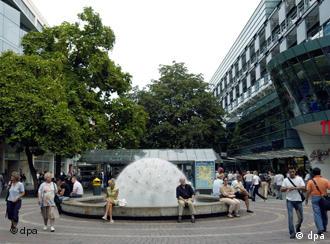 No longer the ultimate shopping experience

The idea was simple. Shortly after the end of World War II, German city developers said cars should be banned from the city centers, giving pedestrians the chance to leisurely walk through downtown in peace.

Shopping and, of course, spending money, was much easier if you could just stroll from one shop window to the next without dealing with traffic.

The pedestrian zones were the symbol of Germany's economic miracle. They belonged to German everyday life just like the country's new postwar currency, the Deutsche Mark, and the Volkswagen Beetle.

Hartmut Häussermann, professor of urban sociology at Humboldt University in Berlin, was a little boy when the first pedestrian zones emerged in Germany.

"What makes these areas so uniform is that they all wanted the same thing," Häussermann said. "People were supposed to go into town, look into shop windows and always see the same thing. They were enticed and seduced into buying these things."

For many Germans growing up during the country's boom years, pedestrian zones were the place they ate their first ice-cream and bought their first pair of shoes. Maybe they had their first kiss on a warm summer evening at the fountain along the quiet cobblestone streets. 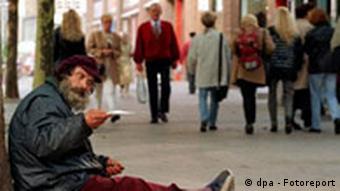 But now, in economically difficult times, their atmosphere has suffered and these car-free areas appear dreary and shabby. Junk and penny pincher shops are driving out long-established stores, with homeless people meeting in front of the town hall for their first beer at ten in the morning.

The pedestrian zone was born in the central German city of Kassel. Over 60 years ago, Kassel prided itself on its Wilhelminian style old town -- until October 22, 1943, when British bombers destroyed 80 percent of the city.

It was a catastrophe for the population, but a one-time opportunity for city planners. Kassel had always lacked a direct connection from the main railway station to the center square. Now, they could build a straight aisle through the rubble piles.

"In this sense, the Second World War with its destruction of city centers was a welcome sight for urban planners, as it gave them the chance to re-plan cities according to a modern image," Häussermann said. This new cityscape was to be one that no longer combined various aspects of daily life.

"A modern city had to be one where traffic had its own space, where shopping had its own areas and where living space was separate, so that this overlap in a limited district was de-concentrated," he added.

Kassel's pedestrian zone, the Treppenstrasse, opened in 1953 and quickly became a national attraction. In the same year, Stuttgart and Kiel began building car-free shopping areas and over the next few years, most other German cities followed suit. 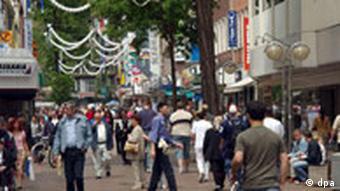 Most pedestrian zones are packed with shoppers on the weekend

Often, existing streets were simply blocked for cars and made into pedestrian zones. But in Kassel, this area was designed solely for this purpose, with a combination of simple architecture, fountains and green spaces, reminiscent of the postwar German's idea of a Mediterranean piazza.

"It isn't bombastic, but rather has a lightness, charm and liveliness to it, like the attitude to life in the 1950s," said Christian Kopetzki, a professor of urban planning at the University of Kassel. "It was so to speak a reflex to overcome the horrors before it. You find that in that architecture."

From a pretty girl to an aging matron

Today, the concrete is slowly crumbling. The architecture appears somewhat stale and the store areas are too small for the shopping adventure these days, said Kassel optician Hans Uwe Hess. Part of the city's famous Treppenstrasse now houses junk shops, where everything only costs one euro, and dim bars. 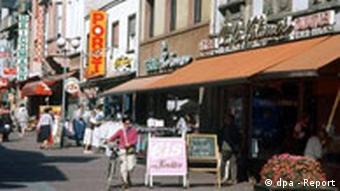 No longer the place to go

"It was once a pretty young girl and today, it's more of a matron, who's no longer as neat as she should be," Hess said. "It's not as interesting to look at anymore."

Kassel is not alone in this development. Many pedestrian zones in major and smaller cities are no longer living up to their colorful history. Perhaps the problem lies in the country's failing economy. Germany can simply no longer keep its promise of mass consumption, which these areas used to represent.

Convinced that litter was driving shoppers and investors away from their city, Mannheim inhabitants have taken up the broom and vowed to take back the streets in a bid to kick-start their own economic recovery. (April 24, 2005)

Germany's largest department store chain, Karstadt, has announced it might close 77 of its stores, primarily in smaller cities and towns. Some are worried that town centers that lose a major store will begin to atrophy. (Oct. 6, 2005)