Almost two months after an inconclusive election, Germany's major parties have forged a coalition deal for a four-year term under Chancellor Angela Merkel. Here are the main points. 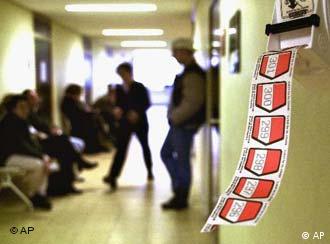 Chronically high unemployment is one of Germany's biggest problems

The manifesto outlines reform measures for the unlikely alliance of conservatives and Social Democrats, who have joined forces to govern Germany in a so-called "grand coalition" once before in the 1960s.

The following are the main problems the government tackles in its power-sharing agreement:

Weak economy: The main thrust of the coalition deal is on reviving the stagnant Germany economy, the largest in the European Union. Once the economic motor of Europe, Germany now has one of the weakest growth rates in the 25-nation EU. The economy is expected to grow by a mere 0.8 percent this year and improve only slightly in 2006.

High Unemployment: In addition, Merkel's incoming government has vowed to make fighting high unemployment the centerpiece of their deal. Germany's unemployment rate, well above 10 percent, is described as the main challenge facing the country.

Yawning budget deficit: A third crucial focus of the deal is an agreement to bring Germany's ballooning budget deficit back within European Union borrowing limits by 2007 -- a major challenge requiring upwards of 35 billion euros ($41 billion) in savings or extra revenues.

Federalism: Long-awaited overhaul of Germany's cumbersome federal system, shifting the division of power between the country's 16 regional states and the federal government in Berlin. The current system, weighted in favor of the regions, has hindered the implementation

Much of the solutions proposed by Merkel's government in solving the country's most pressing problems lie in raising taxes:

VAT hike: The parties agreed to a controversial three percentage point hike in value added tax (VAT) in 2007, an idea championed by the conservatives during the election campaign. Part of the VAT hike will go towards cutting non-wage labor costs -- a measure that many believe is crucial in encouraging German firms to hire.

Rich tax: In return for agreeing to the VAT hike, the Social Democrats secured conservative agreement for a so-called "rich tax," which raise the income bracket for Germans earning 250,000 euros or more, from 42 percent currently to 45 percent.

Retirement Age: In addition, the government plans to raise the retirement age from the current 65 to 67.

Job protection: The government also plans to loosen job protection laws, making it easier for companies to hire and fire people. But, the details still have to be worked out.

Incoming chancellor Angela Merkel called Saturday for Germans to make sacrifices to help put their struggling economy back on track, but her future government's policies are already under fire. (Nov. 12, 2005)

DW-WORLD's dossier on the election aftermath in Germany