Colombian cattle ranchers are trying to protect their livestock from jaguars by killing the threatened big cats. One rancher wants to show that peaceful coexistence is possible.

Livestock farming has a long history in Casanare, Colombia, and the Barragan family is one of the oldest llanero or cattle-herding clans in the region. They rear cattle, wrangling them on horseback, on a 17,000-hectare (42,008 acre) farm.

Casanare and the land around the Barragan ranch are also home to jaguars. The big cats need large stomping grounds to roam and hunt, and farms have eaten into tropical forest, encroaching on the animal's territory. Most cattle herders in the region see the spotted predator as a threat to their calves and foals and set up traps to kill them. 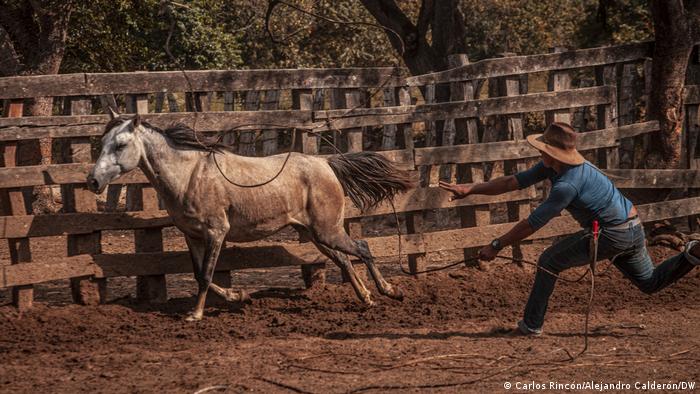 Colombia's llanero or cowboys are coming into conflict with jaguars. The big cats attack their horses and livestock

Defying local expectations and traditions, Jorge Barragan has turned part of his farm into a private nature reserve to provide habitat for threatened jaguars. Killing them is strictly forbidden on "La Aurora" reserve. Barragan also uses income from ecotourism on the ranch to fund his conservation efforts with Panthera, an international organization dedicated to protecting wild cat species.

He hopes his work will show other cattle ranchers that peaceful coexistence with these majestic animals is possible.

A film by Claudia Laszczak and Carlos Rincon

In the mountain village of Arslanbob, a smartphone app is helping communities get the most out of their grazing lands, and in turn protect the world's largest natural walnut forest.

Farmers in the Netherlands reacted angrily to a proposal by lawmakers, including a plan to shut down some cattle farms to tackle harmful nitrogen emissions.

Salman Rushdie off ventilator a day after attack