The assassination that started World War I | Europe | News and current affairs from around the continent | DW | 17.10.2012

The assassination that started World War I

The attack by Serbian extremists on the heirs to the Austrian throne on June 28, 1914 sparked what was called the "July Crisis" in Europe. A month later, World War I began. 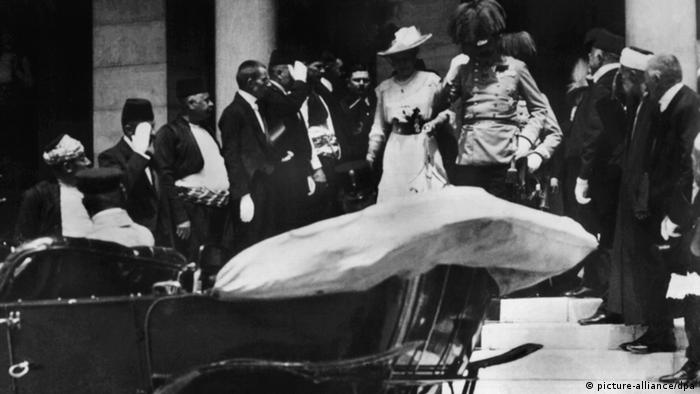 Archduke Franz Ferdinand (1863 – 1914) and his wife, Sophie (1868 – 1914) had just arrived in Sarajevo after a visit with German Emperor William II (1859 – 1941). They were invited to watch the maneuvers of the Austrian troops in Bosnia. On the way into the city, their procession of cars had to drive relatively slowly, which played into the hands of the attackers that lay in wait. 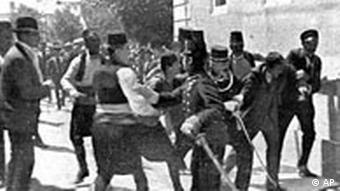 The first assassination attempt failed due to the quick reaction of the Austrian heir-apparent. Out of the corner of his eye, Franz Ferdinand saw something black flying towards him and raised his hand in a protective gesture, thus knocking the hand grenade out of the car. It landed on the car behind him, injuring two of that car's passengers. The perpetrator tried to commit suicide by swallowing a cyanide pill, but as the pill was old, the poison failed to work and only made him sick. He was stopped by people on the street and arrested. The archduke's procession sped quickly to City Hall. There, it was decided that they would take a different route to the grounds of the military parade.

Not long after starting off for the grounds, the driver of one of the cars leading the procession noticed that they were going the wrong way. The cars had to slowly turn back. Meanwhile, a second conspirator had taken up position. He seized his opportunity, and fired his pistol twice into the car. Franz Ferdinand was shot in the neck; Sophie in the abdomen. Their attacker also swallowed a cyanide pill, which also failed to work. While the second attacker was held by passersby, Franz Ferdinand and his wife Sophie died in their car from their injuries.

At the trial of the two attackers, they admitted to being followers of the "Pan-Slavist" movement. With the support of Russia, this organization aimed for national unity for all Slavic people. As many Slavs lived in the Austro-Hungarian Dual Monarchy, the heir to the Austrian throne had long been identified as a potential assassination victim. 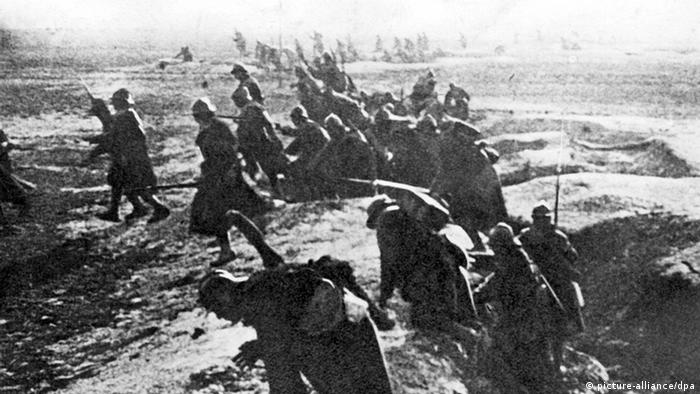 French troops in the trenches in Verdun during World War I

The attack wasn't handled as what it really was, namely an incident which weighed on diplomatic relations between Austria-Hungary and Serbia and which could potentially lead to domestic conflicts with several minority groups. The Austrian military instead acted as if it had been waiting for just such an opportunity to push Emperor Francis Joseph I (1830 – 1916) into an immediate military reprisal against Serbia. In this, he had the support of the German military command. German Imperial Chancellor Theobald von Bethmann-Hollweg (1856 – 1921) sent a missive to Vienna that was the equivalent of an open letter making the case for war against Serbia: his majesty, the German Emperor, stood "in accord with his federal duties and his old friendship" loyal and brave on the side of Austria, the letter read. William II's whisperings aside, there was still enough time to prevent Europe from being burnt in a large-scale fire. But the governments decided otherwise.

Seminal catastrophe of the 20th century 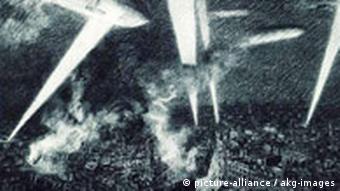 On July 23, 1914, Austria delivered a 48-hour ultimatum to Belgrade, demanding that Austrian investigators be appointed to pursue those behind the assassination. Even though the Serbian government fulfilled this request as well as various others, the response was not enough for the government in Vienna. Francis Joseph I also backed a declaration of war against Serbia. The chain of diplomatic and military reactions could no longer be halted.

Austria-Hungary declared war on Serbia on July 28, 1914. The next day, Russia reacted, mobilizing its army. On July 31, 1914, the German Empire gave France an ultimatum: in the case of a war between Germany and Russia, France was to remain neutral. At the same time, Czar Nicholas II was requested – also per ultimatum – to halt the Russian mobilization. When this ultimatum was ignored and the Russian government did not recall its army, the German military issued a declaration of war against Russia. On August 1, 1914, Emperor William II signed the war declaration.

This day marked the beginning of what the American historian George F. Kennan (1904 – 2005) described as the 20th century's "seminal catastrophe" – World War I. As if gripped by madness, Europe's political leaders gave up the continent's relative wealth, stable political relations and cultural hegemony over large parts of the world in the summer of 1914. In what seemed to be some sort of secret pact, the crowned rulers of Europe transformed the continent into a battlefield of unimagined proportions, all because of an incident which was insignificant in comparison to its consequences. They were entranced by the prospect of what they stood to gain at the end of the war, and didn't hear the foreboding voices warning them of their own demise.

Historian Christopher Clark, author of "The Sleepwalkers: How Europe Went to War in 1914," discusses with DW the complexities of war, and why Putin's behavior does not represent Russia.